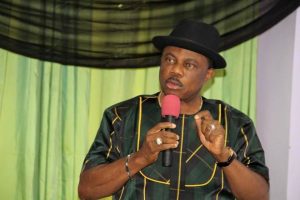 The various political parties presenting candidates for the November 18 Governorship Election in Anambra State have nominated their flag bearers, thereby signifying the commencement of the real battle for who will occupy the Agu Awka Government House from March 17, 2018.

At the last count, over 10 political parties had nominated their candidates, although political observers know that the battle would be fought by just about five parties.

The political parties that had selected their candidates include the ruling All Progressives Grand Alliance, APGA, which has the incumbent governor, Chief Willie Obiano as its flag bearer, All Progressives Congress, APC, which nominated Dr. Tony Nwoye, the Peoples Democratic Party, PDP, which has Mr. Oseloka Obaze as the candidate, Progressives Peoples’ Alliance, PPA, with Mr. Godwin Ezeemo as the candidate and the United Peoples Party, UPP, which nominated Chief Osita Chidoka. Other parties and their candidates are the Advanced Congress of Democrats, ACD, with Mrs. Oby Okafor as the candidate and the Peoples Party of Nigeria, PPN, with Mr. Henry Ikechukwu Onuorah as the flag bearer, among others.

The emergence OF Governor Obiano as the candidate of APGA was not without the usual political intrigues. In fact, Governor Obiano’s political camp was really bruised by Chief Martin Agbaso, who created a faction that almost tore APGA apart. But for the calmness adopted by the governor and the leadership of the party, the crisis would have continued to linger.

At a stage, Agbaso appeared to be having an upper hand, especially when an Enugu High Court declared him as the authentic national chairman of the party, which would have meant that he would be the person to forward APGA candidate to the Independent National Electoral Commission, INEC. However, Agbaso fell like a pack of cards due to the superior legal powers of the Obiano camp, which got the Court of Appeal to vacate the Order of Mandamus obtained by Agbaso against the national chairman of APGA, Chief Victor Oye.

As the incumbent governor, he has an advantage over other candidates, coupled with the fact that he has some achievements of his administration on his side to show to the people during the campaigns. Some of his landmark achievements include security, which has unarguably made Anambra one of the safest states in the country. He has also attracted investments to the state, especially in the agricultural sector, such that Anambra has become an exporter of vegetables.

He also completed one of the longest bridges in the southern part of the country to link the oil rich Aguleri Otu in Anambra East Local Government where the Orient Petroleum has its refinery. Obiano’s administration also prides itself as one of the few states in the country paying workers and pensioners regularly with the result that there had not been any industrial action against his government since 2014 when he mounted the saddle. Although there are formidable opponents challenging him, there is the belief that he might overcome the odds to emerge the governor of the state later this year.

The victory of Senator Ahmed Makarfi as the National Caretaker Committee Chairman of PDP appeared to have brought sanity into Anambra State PDP, as the branch noted for factionalism was able to conduct its governorship primary in a peaceful manner. In the past, several aspirants would have conducted their primaries at different venues and declared themselves winners and then wait for the courts to pronounce which faction was authentic.

Although there were still some bickering by some of the aspirants before and after the primary, sanity still prevailed during the exercise as a former diplomat, Mr. Oseloka Obaze defeated other contestants to pick the party’s ticket. Obaze, who served as the Secretary to the State Government during the administration of former Governor Peter Obi and also served under Obiano at some point, has started well by visiting the major stakeholders of PDP in the state so that the party would be truly united before the campaigns begin fully.

With former Governor Obi, Chris Uba, Nicholas Ukachukwu, Professor A., B.C. Nwosu, and many others on his side, indications are that he would embark on a robust campaign that will likely yield the required result. He is from Ogbaru Local Government Area, which many consider as a great advantage for him in view of the large population of the local government. He knows the state so well and is seen as a serious candidate.

The candidate of APC, Dr. Tony Nwoye, has been named the giant killer by his admirers. Mr. Nwoye, a medical doctor, contested for the same position in 2015 during which he came second. He defeated Nicholas Ukachukwu to emerge the candidate in 2015. He was the state chairman of the PDP at one time and was later to become a member of House of Representatives from where he participated in the governorship primary and picked the party’s ticket.

Known as a great mobilizer, Nwoye’s defeat of the like of Senator Andy Uba and the national auditor of APC, Chief George Moghalu, who had been a consistent member of APC from the days of APP, was an indication of what he is likely to do during the November election.

Mr. Nwoye used the two local government areas he is representing in the House of Representatives as a test case of what he is likely to do for the state if elected the governor. Since he was sworn in after protracted litigations, he had embarked on three serious empowerment programs for the people of the area in a manner that his constituents had become the envy of other local governments in the state. As some of his admirers would say, the taste of the food is in the eating.

Being one of the youngest candidates for the November 18 election, Anambra youths were already excited that if he is voted into office, Nwoye would become one of the youngest governors in the country. Already, Senator Andy Uba, seen in many circles as Nwoye’s political mentor, has said that he would collapse his structure for Nwoye and go the extra mile to campaign for him to ensure that APC wins the November election.

Mr. Godwin Ezeemo was the first to pick the ticket of his party and therefore, was the first governorship candidate to emerge. Ezeemo contested for the governorship in 2015 and did not make it, but over the period, he had garnered enough experience that is expected to come handy during this year’s election.

While many politicians were jumping from one party to the other, Ezeemo continued to nurture PPA with the result that the party has become a household name in the whole of Anambra State. To show the seriousness of his desire to serve the people of Anambra State, Ezeemo has brought home all his investment to the state to enable him to concentrate on the race.

In fact, other candidates acknowledge the fact that Ezeemo is a very serious candidate who anybody can ignore at his own peril. So far, he is the only major candidate from Anambra South in the race and this can give him an added advantage. While acknowledging that the incumbent governor had achieved some goals in some areas of the economy, he believes that such achievement were not things that could move Anambra forward.

The former Minister of Aviation and Corps Marshal of the Federal Road Safety Corps, FRSC, who is from Anambra Central has the personality of a governor. Though pro-Biafra groups adopted UPP initially as the party to support during the election, events that took place during its primary, which led to the death of one of the delegates, made the groups withdraw their support. Besides, the fact that he is from Anambra Central, which had produced the governor of the state for eleven consecutive years, made Chidoka an outsider in the race.

It would also appear that he is not receiving total support of the leadership of UPP in the state, which had to suspend him and the other aspirant, Chief Chudi Offodile from the party two days to the party’s primary. It only took the personal intervention of the national chairman of the party, Chief Chekwas Okorie to lift the suspension. However, anything can happen in politics. For now, many people are wondering why Chidoka decided to vie for the governorship at this time when the two other senatorial zones had occupied the position of governor for only four years each.

Mrs. Oby Okafor is the only female governorship aspirant so far. She was the state chairman of the party and was one time the chairman of the Inter Party Advisory Committee, IPAC, in Anambra State. She said during her nomination that she would mobilize the women to vote for one of their own because, according to her, the men had cheated women enough in politics, hence her decision to join the race.

As it stands, all eyes are on Anambra and the expectation is that the candidates would not adopt personal attacks against opponents. As the world watches, the outcome of the Anambra election would go a long way, giving Nigerians an idea of what is likely to happen during the general elections in 2019.