Home Blog We are waiting and watching by Cardinal Okogie
Post Views: 28 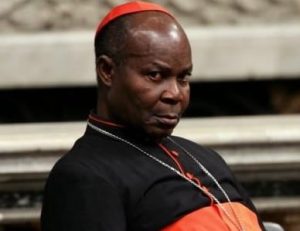 Whoever loves Nigeria should be concerned about the security of life and property within her borders. It affects all of us across party, ethnic and religious lines. It affects the rich and the poor. Unfortunately, it can, and it ought to be said that our political leaders constitute the greatest threat to security in this country, not armed robbers nor kidnappers, not Boko Haram nor herdsmen. Nigerians are currently forced to watch a show of shame by the ruling party of today and the ruling party of yesterday. Such are accusations and counter-accusations of looting that Nigerians find it difficult to differentiate between the accuser and the accused. Huge sums of money belonging to the people of Nigeria obviously got into wrong hands and for wrong reasons. There are good reasons to suspect that the looting that took place cut across party lines. Nigerians deserve to know how, for example, the two leading parties financed their campaigns in 2015. But instead of honest answers, we are treated by the two big parties to a theatrical display of politically motivated compilation of lists of looters. We are forced to say what Jesus said to the accusers of the adulterous woman in the Gospel: whoever has not sinned let him cast the first stone.

Nigeria is like the man in the Gospel according to Luke who, travelling on the way to Jericho, fell into the hands of armed robbers who attacked him and left him for dead. Nigerians are impoverished by those who are put in charge of her enormous resources while our political leaders live in affluence. The standard of living continues to nosedive. And while politicians display ill-gotten wealth at birthday and wedding parties, there is widespread dilapidation of infrastructure. Our government got a friendly reminder recently. Counselled to invest resources on the people of Nigeria, its apologists, as usual, insulted the messenger. Has Bill Gates become a wailer and a looter, as critics of this government are often labelled?

Two sectors were singled out in Gates’ discourse—education and health. It was a simple reminder of the saying: healthy minds in healthy bodies. Young Nigerians see how their future flies away from them, while those responsible for its flight buy properties in Dubai and elsewhere. We have enough to revamp the education and health sectors and secure the future of our children and children’s children. But our schools and hospitals are in decay. The money needed to keep them has been stolen while those who corner the money send their children to the best schools in Europe and North America. They even go to those places to treat a common headache at the expense of the ordinary Nigerian. As a result of the poverty visited on our people, especially our youths, it becomes easy to recruit them into all kinds of militia as another season of elections approaches. So we move from one unending season of insecurity to another. The fire of Boko Haram is yet to be extinguished. Government officials tell us Boko Haram is “degraded” or “technically defeated.” The same officials tell us they are discussing ceasefire terms with a defeated army. What a contradiction!

This same “degraded” Boko Haram cruised in a convoy into Dapchi, abducted over 100 young schoolgirls without the Nigerian Army firing a shot, cruised back a few days later to return the girls, again, the Nigerian Army was nowhere to be found. If a defeated army can walk in and out of Nigeria with so much ease, like a hot knife through butter, what will an undefeated army do to us!

As we speak, Leah Shabiru, one of the girls is still in captivity because she refused to renounce her Christian faith. A few days after her mates were released, the Inspector General of Police was on television assuring Nigerians she would be released in just a few hours. In just a few hours, the story changed. The boss of the Nigerian Police said he was misunderstood. Do government officials take us for fools? Nigerians of today are no fools! While the Boko Haram inferno continues, murderous herdsmen emerged, killing innocent Nigerians in a brutal reminder that government is either unable or unwilling to secure this land and its people. Nigerians hear of complaints by state governors accusing some soldiers and policemen of acts prejudicial to security. It is sad to hear such stories because there are young men and young women in the army and in the police in this country who have been sent to their early graves while protecting us. It is sad to hear that they are being betrayed by those who ought to be their comrades. What a Nation!

But we must not generalise. Not all our soldiers and policemen and women are traitors. Yet, the need to sanitise these two institutions has attained grave urgency. In the same way, while there are peaceful and law-abiding herdsmen in this country, there is a militia of herdsmen terrorizing this country. The call to self-defence by a retired army general should cause apprehension. The legitimacy of self-defence is not in doubt. But who, in this season of partisanship, will check its modality, the morality of its means. Unchecked, that can open another chapter of bloodshed in this country. Instead of indecently jostling for positions in 2019, the immoral electioneering propaganda that has replaced good governance, and the vicious fight over whose turn it is to capture the pot of honey that Nigeria’s wealth is, our politicians across party lines should stop and ponder: what type of Nigeria are we handing over to our children and to our children’s children? Whether our political leaders in all the parties will seek wise answers to that question is left to be seen. That is why we are still watching and waiting.

Amnesty Or The Gallows For Boko Haram?