Home Blog The ban on importation of vehicles by The Guardian 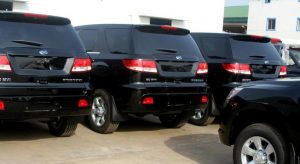 The Guardian examines the proposed ban on importation of vehicles by the government for official use in this editorial of 9th April 2018..Read on

The move by the National Assembly (NASS) to stop the importation of vehicles for official use is a step in the right direction and should be supported in the national interest. Nigeria’s insatiable appetite for importation has made the country a dumping ground for all kinds of industrial materials including disused ones.

Nigeria is the ultimate loser so long as the country is hooked on importation craze unlike in the past when vehicles that were assembled in Nigeria were mandatorily used by government officials.

The Olusegun Obasanjo regime, in the 70s, enforced this patriotic policy that positively boosted local auto components development. Peugeot cars were the official vehicles then. That enabled the Peugeot Automobile of Nigeria (PAN) to source over 40 per cent of components locally, apparently, in readiness for full local manufacturing in the country.

But all that is now history. Successive administrations backed out of the policy in favour of imported vehicles that are detrimental to Nigeria’s economy. Today, government officials parade assorted brands of foreign cars. Besides, most of the cars on Nigerian road are foreign brands and yet there is no assembly plant of those brands in Nigeria. There is need for a policy shift to promote indigenous automobile industrial development and also create employment.

For instance, Nigeria has the Innoson vehicle manufacturing company in Nnewi, Anambra State, which has made appreciable progress but is, unfortunately, neglected by the government. The Innoson brand of vehicles could be improved upon to meet desired international standard as Nigerian roads locally made cars to burnish the country’s image and make it less dependent on importation.

Nothing can be more unpatriotic and harmful to the economy than for government at all levels, to be spending billions annually in scarce foreign exchange to import vehicles while locally produced ones are left unpatronised. It smacks of paying lip service to industrialisation and job creation in the country.

Rather than patronise the budding local auto industry and create jobs for the millions of roaming unemployed youth, government, in a stark display of un-patriotism and greed, prefers foreign vehicles and thereby boosts the foreign auto assembly lines while at the same time kills local industrial development.

The effort by the lawmakers is critical to revamping the auto industry. The lawmakers should see to it that the motion is adopted to stop the importation of vehicles. And of course, the action should not be abandoned halfway but pursued to its logical conclusion.

The House of Representatives had by a unanimous vote, the other day, at a plenary, adopted a motion to stop the importation of official vehicles for use in Nigeria. The motion, titled “Need to Prioritise the Procurement of Cars Manufactured or Assembled in Nigeria by Government Ministries, Departments and Agemcies MDAs,” was sponsored by Omoregie Ogbeide-Ihama (PDP, Edo State).

Ihama in the motion expressed worry that Nigeria had become a dumping ground for automobiles manufactured on foreign soil unlike in the past when car manufacturing countries existed in the country.

He said the development had stripped Nigeria of the benefits of having technology transfer, employment for Nigerians, revenue generation through taxes, reduction in balance of trade deficit, increased GDP and safety specifications. Consequently, he prayed for a deliberate policy of government to correct the anomaly.

In a show of patriotism, the House concurred and urged the Federal Government to develop a policy and provide a timeline to make it compulsory for MDAs to restrict procurement of cars to those manufactured or assembled in Nigeria. The House, further, mandated its committee to investigate why the automobile companies in Nigeria collapsed and proffer solutions.

Not long ago, there were automobile manufacturing companies such as Volkswagen, Mercedes Benz and Peugeot, not to mention the heavy duty auto companies like Leyland, Steyr and ANAMCO, among others. One after the other, these companies folded up.

It needs to be emphasised, just as the House noted, that the automobile market is a multi-billion naira business in Nigeria given the large population and high reliance on road transportation.

Besides, it is a fact that governments at all levels are the biggest spender and major buyer of automobiles in Nigeria. Over 95 per cent of the automobiles procured by government MDAs are neither manufactured nor assembled in Nigeria.

The nation’s industrialisation policy should include automobile manufacturing. The national automotive policy which was drafted as far back as 1990 received presidential approval in December 1992 and later endorsed by the transitional council on August 10, 1993.

Thereafter, the policy document was formally launched the same month. The document provided for the establishment of the National Automotive Council as a parastatal of the Federal Ministry of Industry.
Act No. 84 of August 25, 1993 backed up the establishment of the council. The thrust of the national automotive policy is to ensure the survival, growth of the Nigerian automotive industry using local, human and material resources with a view to enhancing the industry’s contribution to the national economy, especially in the areas of transportation of people and goods.

Ever since then, little or nothing has been done to realise this noble objective. The Goodluck Jonathan administration attempted to resuscitate the policy but without any action towards implementation.

Clearly, the policy was not deep enough. It failed to take into consideration critical issues such as the epileptic power supply and the comatose Ajaokuta Steel Plant as well as other affiliated institutions that should serve as the main source of raw material.

Government should make the automotive industry a thriving business with private sector participation. There is no doubt that the automobile business is good business. The only problem is the need to avoid policy somersault.