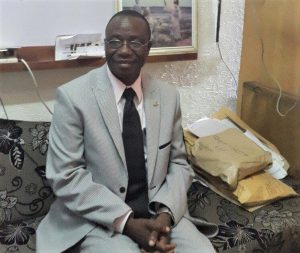 Why would a lecturer be wary of his name being mentioned over the phone by a student if there was nothing inappropriate about the conversation? Did he feel the student was being disrespectful by not addressing him as Prof in the usual Nigerian parlance? Or perhaps he is too experienced in such amatory conversations that he suspected it could be recorded? I can imagine the wry grin on the lady’s face when he said that, she would be a learner if she didn’t expect that line.

For obvious reasons the news about Professor Akindele’s alleged sex for marks scandal did not surprise many. If you passed through a Nigerian university you will know that this is not an isolated case. What is supposed to be a four year period of study for many ladies is rather a labyrinthine jaunt laced with the ugly side of machismo.

Sadly, such incidents are more or less passive stories garishly discussed in canteens and beer parlours across most of our universities.

“Its normal now” you ‘ll likely hear from one of the guys huddled around a table full of green bottles.

“The babe should have just shagged the brains out of the old man” another will say.

“Who knows, he could have been p-whipped into giving an A after just one round” yet another will add, followed by a loud laughter and booze continues. That’s about it, end of story!

And on social media, there is also a possibility of being presented with alternative facts to make the victim look like the culprit. The debate will then deviate from the alleged offence to a callow display of chauvinism between fluky feminists and lousy misogynists. 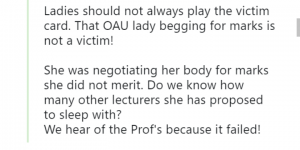 Or worse still the lecturer’s church member or Pastor will boldly defend him by claiming that “the lady purposely set him up” and that he is “a man of God, who is too gentle for such act”. The absurdities we often contend with in Nigeria.

Of course, we are all aware of what goes on in our institutions of higher learning. The so-called slay-queens are known to entice lecturers regularly in a bid to make unbelievable grades when they can’t even spell their course of study. 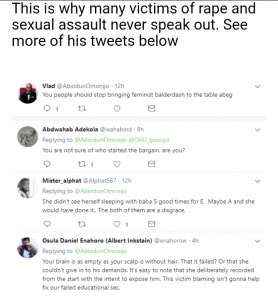 However, we shouldn’t make this particular incident about them. The lady in question scored 35 marks. She failed and should be encouraged to re-sit the course, that is the proper thing to do. So she has not committed any offence. The offence here is that a lecturer, a professor for that matter is demanding sex as a bribe to give better grades.

Someone once said that lecturers are demi-gods while the Vice-Chancellor is the almighty. It is almost true. Our lecturers are way too powerful. I remember one who was notorious for this back in my uni days. He couldn’t care less if the lady was single or married. He just insisted on having his way, and like Akindele he demands in multiples.

A lady friend of mine was his victim. She spent extra two years in school because she refused to have sex with him. I am talking about a lady whom I know to be a serious student. On one occasion when he rejected her coursework, it was only my intervention through his wife that made him reconsider. Incidentally, the man was fired a few years later, but only after he must have raped many ladies and frustrated others out of school. If he had a good relationship with the Vice-Chancellor then, chances are that he would have retained his job but I learnt they didn’t see eye to eye so he got sacked.

Serious institutions should never allow these type of acts to go unchecked and it was gladdening to read that OAU swiftly set up a committee to investigate the matter. Obafemi Awolowo University is among the few etched in gold dating back to our colonial history. It has to ensure that this embarrassment is properly dealt with to limit the smudge on its stellar reputation. It will be better still to hear from the National Association of Nigerian Students. They are supposed to have the students’ back in matters like this.

The National Universities Commission should also set up an independent apparatus for the appraisal of not just issues like this, but many others between students and lecturers.

A lot of times students are blamed for the quality of graduates we produce. They are labeled as unintelligent and indifferent. While that may be true lecturers also constitute a huge part of the problem. If a graduand must be found worthy in character and learning to be awarded a degree, how much much more a university don? A lecturer should be an embodiment of all that is good in a society, and not a person found to be unworthy in character.

Professor Akindele should come out of hiding and face the music.