Home Blog The outcome of an abortion vote is predictable in a liberal Ireland.
Post Views: 33 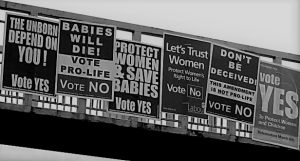 There has been close to 9 million abortions in the United Kingdom since the implementation of the 1967 Abortion Act. A rather mind-numbing figure. To put it more starkly, approximately 500 unborn babies who were killed daily under the law over the past fifty years.

And to add salt to the injury another disturbing stat states that 97% of these were healthy pregnancies aborted for social reasons while 38% were repeat- abortions.

As the campaigns for the abortion referendum wraps up here in Ireland we have been treated to hot debates over all the media platforms. Most have been as interesting as they were revealing and I must admit that my pro-choice position had been under review for the last few months.

A yes vote will permit the lawmakers to amend the laws and perhaps even make it laxer than what obtains in the UK. Leading the charge to repeal the law is none other than the PM himself, not oblivious of the chilling stats listed above Mr. Varadka has said in a recent report that there may not be another chance to vote on the issue of abortion for a “long time”, and that a No-vote would send the wrong message to women and the world about Irish society.

But such narrative riles the No-campaign who despite the fact that an average of 9 women travel daily for abortions stated through a spokesperson that the only way “to prevent the adoption of an extreme abortion law is to vote No” as a Yes-vote will likely go “far beyond dealing with limited difficult cases”.

For a small country (Ireland has less than 5 million people) that is historically known to have deep conservative traditions, it amazes me how the changes are coming thick and fast.

We are talking about a country where you could only access contraception with a satisfactory proof of marriage less than 40 years ago. As a matter of fact, any pregnancy outside of marriage back then could get the lady ‘imprisoned’ in care home and children born out of wedlock were considered ‘illegitimate’ or ‘bastards’ to be less palatable.

Fast forward to 2015, Ireland set the record of becoming the first nation to legalise gay marriage by popular vote. That was when 62% of the electorate voted in favour of gay marriage and the country’s parliament enacted the 34th amendment that permitted marriage to be contracted by two persons of the same gender.

And in 2017 the country’s parliament elected Leo Varadka, a 38-year-old, openly gay son of an Indian immigrant as the Prime Minister. Making him the youngest person and the first from a minority ethnic background to hold the highest office in the land.

Now we are heading to the polls again, this time to decide on repealing or keeping the abortion law which prohibits abortion barring severe health risks.

I have observed the debates with keen interest. The nosey parker in me also extrapolated the issue beyond what is often found in the media to ask some pertinent questions.

Is the push to repeal the current law be a covert strategy by the government to stem the rising population which peaked at a decade high in 2017? While it may be true that governments use loose abortion laws as a tool for population control, especially if you consider the Prime Minister’s position on the matter, one cannot underestimate the activists and nerds whose influence is beyond the reach of government control. Buoyed by the country’s young population this group has demonstrated in the past that smartphones and loudspeakers are the only tools necessary to push through any societal reform.

I recollect that the evaluation of my position on the matter started a few weeks back when my 13-year-old daughter made a point during school-run as we drove past a group of activists gathered in front of the Mardyke Arena.

“Daddy, I’m torn on this one”, she had said, “much as I believe that unborn babies shouldn’t be punished with death for an act they knew nothing about, I also think women should determine what happens to their body” she added.

Growing up as a teenager in Nigeria I never gave it a thought that a day like that would come, my parents didn’t discuss such topics with my older sisters, at least not that I know of. But here we are, in a world that is increasingly liberal and I’m having a hearty discussion on abortion with my teenage daughter, I only can imagine that many parents now discuss same with their kids back in Nigeria let alone here.

So as we await the official results of today’s vote, one does not need rocket science to project the outcome in a country where the elderly conservatives have recently lost the battles against contraception, divorce, and gay marriage.

I believe the Ayes will have this one.

Wisdom Nuggets And A Prayer For My Kids.

What you need to know about Ireland’s abortion referendum.