Home Essays An Overview Of The Operations Of SARS: A Call For Reformation by...
Post Views: 16

Two years ago, I decided to accompany my elder brother – Oluwasayo to pay our grandmother a visit in the village. Shockingly, men well dressed in the uniform of one of the security agencies in the state appeared in our front, bizarrely looking at the vehicle we were in. “Good afternoon men of the law,” my brother muttered while gazing at them lustrously. As usual, he presented his driving documents and was about to continue with the journey when a hefty man stepped out of a car painted in black. He whispered to one of his boys, “Is that young man refusing to cooperate?” Inexplicably, my auricle sent the sound waves to my tympanic membrane. I became bewildered and was out of clue on what will likely supervene.

Shortly, while distending his right hand towards our vehicle, one of the men in uniform was expecting my brother to give out part of his hard-earned money. “It seems you are teasing,” Oluwasayo shouted. “You are going nowhere if you fail to comply with us young man,” another hefty man said as he pointed a gun in our direction. At this moment, I was flabbergasted with what I was seeing. We had no other option than to consent to the coerced norms of giving those men in uniform some cash they do not deserve.

Nevertheless, I did not pay attention to the name inscribed on their uniform until last weekend when I had to recall that those lads who exhibited the unscrupulous act that fateful day are now being painted all over the social media. Recently, there have been massive demonstrations against the presence of the Special Anti-Robbery Squad (SARS) – a petrifying anti-crime unit of the Nigeria Police Force. This followed after numerous exasperating and appalling acts they perpetrate.

Engrossed in curiosity to comprehend the history of the Special Anti-Robbery Squad (SARS) in the land, I came across some awe-inspiring realities. According to the founder of SARS that was instituted in 1992 – Simeon Danladi Midenda, Anti-Robbery is a special approach of the Nigeria Police Force to conquer the superfluous robbery cases in the nation. He further stated that SARS initially stayed undercover, monitoring radio communication of conventional police operatives. As a result, on hearing the trumpet of a robbery incident, SARS would go out with speed, dispersing in different teams to predetermined locations.

Interestingly, the early days of this security body christened SARS gained colossal appraisal in Lagos in the 1990s when they never stood on the road looking for robbers, but rather, skillfully track them unannounced. Simeon Danladi also remarkably said, “We did not receive direct complaints from members of the public but allowed the Divisional Police Officers (DPOs) to do their job and transfer to us ingrained armed robbery cases for further follow-up actions.” This is to ensure that the duties of SARS are carried out impeccably with their identity undisclosed to the general public.

Sadly, how the operation of SARS got to where it is today is highly disheartening. There has been an evident deviation from the original concept, and the controversies engulfing SARS in recent days cannot be addressed unless the definition of headway is reconsidered. Mandatorily, they should undergo reorientation and afterwards, evaporate from public view and stay faceless as they were in the early days of their establishment.

Further reinforcing the disgusting acts perpetrated by the special law enforcement agency in the nation, ‘Sahara reports’ stated that in the South-East zone, N9.35Billion (over 60 Million US Dollars) was illegitimately made from 1,350 Check-points in 18 Months. Strangely, nothing less than N3.5 Billion has been lost by the people to kidnappers in the same zone since 2007.[1] This is to show that the primary duties of the security body in question have been left unattended to. However, they are ecstatically deriving pleasure in exploiting the populace.

Also, Nigerian rapper and actor, Ikechukwu Onunaku, stated his dissatisfaction over being assailed by operatives of the Special Anti-Robbery Squad at the Lekki Phase 1 area of Lagos State. The famous rapper said that “SARS operatives pulled him out of the Uber he was in, bundled him into their Hilux van, and drove him to Lagos Island.” Further expressing his dissatisfaction with the ugly incident that befell him, Ikechukwu made known to the public that the SARS operatives said they would implicate him if he dared to prove stubborn.”[2]

Unarguably, the proliferation of anti-crime operations that ought to be targeted at curtailing crimes by the federal police has resulted in barbarous, unbearable, and degrading treatment of the citizens, especially the youths. It is now a crime for an average Nigerian who works so hard to purchase iPhone from funds gotten from business, scholarships, or other lawful means. The Special Anti-Robbery Squad has also made the use of laptops with high specification a crime in this present dispensation. A young lad with an expensive laptop which he/she uses for rendering 3D projects, modeling of world-class structural designs, or other similar purposes, will not be allowed to live in peace in the world where SARS tends to be threatening youth existence.

Joyfully, in December 2014, songs of praises saturated the atmosphere of the nation when police authorities launched ‘human rights manual’ proscribing the cruelty and other ill-treatment of citizens. Buttressed by international bodies and civil society groups in Nigeria, the manual was embraced for use in all police training colleges as part of the police reform, and to address concerns about police delinquency. However, in practice, SARS has failed to implement the instructions in the manual.[3] So sad!

Grabbing the bull by the horn, truth be told, the legal system in Nigeria needs to be questioned. According to S.O Nnamani, a lecturer of International Law and Jurisprudence, human rights are those privileges that all individuals should enjoy by the virtue of their humanity. Human rights protect individuals against oppression, exploitation, and many other social ills.[4] If this holds true, the malicious actions by men in uniform in the nation are not just insults to our human rights, but also a public display of the failed legal system in the land. If not for the continued crying by the masses on Twitter, we would be voluntarily wallowing in the ocean of extortion, assault, and murder forever.

However, rather than abolishing the Special Anti-Robbery Squad, and expose the nation to frequent theft, Police training and assessment need to be rejuvenated, reinforced, and revived. This calls for the reformation of SARS to a new unit with firsthand structural operations for a better and improved service delivery. The re-organization of the Special Anti-Robbery Squad should be engineered towards ensuring international core values are attained. Also, integrity and patriotism should be the watchword of all security men.

Going forward, an independent unit should be set up to solidify the use of modernised defensive measures such as surveillance cameras. Likewise, unique tactics must be employed under the umbrella of anonymity for effective spatial crime detection. In doing so, the new set of standard policies will safeguard the interest of the people. Not just being one-sided in a crucial judgmental moment, I will have to reiterate it again that abolishing SARS will only result in an amplified rate of robbery cases because many people will take advantage of the loophole to establish their long-hidden desire to cause havoc by engaging in recurrent burgling. Hence, a reformation will be a more appropriate option.

In conclusion, with the hashtag #EndSARS enveloping the atmosphere of the social media last weekend, it is imperative to dance to the tune of the complaint tabled by the youths of the dear land. Even the Holy Bible says in 2 Corinthians 13:1 (AMP), “By the testimony of two or more witnesses must any charge and every accusing statement be sustained and confirmed.” After quite a number of Nigerians have stated their grievances over the horrendous activities of SARS, and considering the aforementioned illustrations, the need for a reformation should be taken into consideration without further delay.

[3] Amnesty International(2016) Nigeria: “You Have Signed your Death Warrant: Torture and other ill treatment in the Special Anti-Robbery Squad (SARS)” 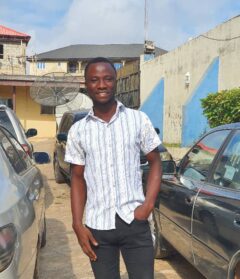 The Rising Trend Of Plastic Surgery Among Women by Precious Aliu.

Nigerian Ladies And The Rising Craze For A Banging Body by Chukwuemeka Oluka.