A lady born as Bilikisu Abiodun Motunrayo Adekola(got converted in her 20s). She was born on 24th December,1962, the third child of seven from Ibadan, the capital of Oyo state.She is married to Abiodun Awosika(who is a petroleum engineer) and blessed with three children.

Ibukun completed her primary and secondary school at St. Paul’s African church Primary School,Lagos and Methodist Girls’ High School, Yaba respectively before she proceeded to the university of Ife( now Obafemi Awolowo University) were she graduated with a B.Sc in chemistry (a course she didn’t like). She holds Post Graduate and MBA certificates upon the completion of several business school and IESE Business school.

While on her compulsory NYSC service, she worked as an audit trainee at Akintola William and Co. When she got into Akintola Williams, within the one year of her service, she discovered that she hated Accounting. Though she was good at the figures but she hated the idea of moving from one company to the other going through old dusty files. She didn’t need anybody to tell her this. She was too restless to just keep following some certain procedures that are laid down. She was so restless and she needed to be able to express myself as there was no room within auditing to do that. At the end of her service year, even though they offered her permanent employment, she turned it down, she served in Kano and came back home. Her parents were wondering what to do with her. She wanted any job, anything she could do. But the first job she found was with a furniture company and she didn’t care. She took the job because she just wanted to be busy and only lasted three and a half months with that company. But it was three and a half life-defining months for her. Within those months, she discovered why she wanted to study Architecture in the first place. Within the context of furniture, she discovered she could play around with space. Loving the process of creating and designing furniture, she left for Alibert Nigeria Ltd. as showroom manager.In her quest to be independent, she established a furniture manufacturing company called Quebees Limited  in 1989 before it evolved into The Chair Centre Limited and later SOKOA Chair Centre Limited following a venture merge with SOKOA S.A  and Guaranty Trust Bank in 2004.

She says”I’m always going to school. In year 2000, I went to Lagos Business School. I did a Chief Executive programme. After about three years, I knew there are new things to learn. Having just had a baby, I took off to Barcelona, Spain to do a MBA Global Executive programme. People thought she was crazy. They said “what do you need all these for? You are already successful. What do you need all these degrees for?” Success is left to the person interpreting. What others consider success, for you, it might be the beginning. I don’t give myself out for people to measure. I will be the one that is measuring. Every year, I must go for at least a brief course.”

She is now a fellow of the African Leadership Initiative and Aspen Global Leadership Network, Ibukun is a member of the Nigerian Economic Summit Group , member of the board of Nigerian Sovereign Wealth Fund and former Chairperson, Board of Trustees of Women in Management, Business and Public Service .In 2011, she co-founded the Afterschool Graduate Development Centre, a career centre established in order to checkmate the high rate of unemployment in Nigeria. In 2008, Ibukun was among five Nigerian entrepreneurs who appeared in the first African version of the Dragon’s Den . She also hosts a T.V programme called Business His Way.

She takes over following the retirement of previous Chairman, Prince Ajibola Afonja .Ibukun Awosika is member of IESE’s International Advisory Board (IAB). She also sits on the board of Digital Jewel Limited and Cadbury Nig Plc.

Mrs Ibukun Awosika was, on Monday, September 7, 2015, appointed at the Chairman of First Bank Nigeria.

The woman, an ardent lover of God, as shown through her life that life is in stages so you therefore have to begin little ( Do not despise the day of little beginnings), then with you been hardworking and motivated you mount up to the top. She taught the importance of following what you love doing passionately, even when people don’t seem to understand you. She also taught the importance of education, one doesn’t really stop learning, the more heights she got to the more she put effort into learning more. Most of us would probably not have known her if she had just settled for been the head of her manufacturing but she kept striving and now she is THE IBUKUN AWOSIKA, first female chairman of First bank with a couple of awards to her name.

Ojetunde Esther, a first year student of Pharmacy in the University of Lagos wrote in via ojetundeesther45@gmail.com 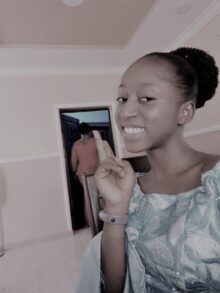