I engage in social media commentary on trending topics primarily because I find it entertaining. You cannot help but join the fray and have a good laugh which of course is healthy. Yet, we must continue to seriously interrogate and analyse our social consciousness if we are to make meaningful progress as a developing nation.

2020 wasn’t expected to be a tumultuous one given that we had a general election the previous year with many expecting the Buhari administration to take the country to the much-publicised ‘Next Level’. But who would have anticipated that it will be remarkable for the country not just because of the covid-19 pandemic but also for the #EndSARS protests? We all followed the events, the ensuing outrage and the discourse. And then at the turn of the new year, supporters of US President Donald Trump held a protest in Washington DC and invaded the Capitol.

It was quite interesting observing the sharp contrast in the reaction of some supporters of the “Soro-Soke Generation” especially those in the diaspora in relation to the Capitol invasion.

Suddenly those who moved opposed movement. Those who adorned their avi with stained Nigerian flags squirmed at the thought of doing the same with the US flag. They turned to militants demanding the deployment of the US military to massacre the hoodlums and when confronted with this obvious hypocrisy became vegetarians analysing the difference between apples and oranges. Indeed, one prominent diasporan supporter who goaded protesters to defy the curfew imposed by Lagos state tweeted about how she evacuated her office when a similar pronouncement was made in Washington DC.

Before I continue, it is proper to lucidly state here that the #EndSARS protest was justified and long overdue. For decades the special anti-robbery squad terrorised, maimed and slaughtered innocent Nigerians. Successive IGPs promised to curb their excesses but like most things in our country, the promises evaporated as soon as they were voiced.

There had been previous demands by part of the citizenry especially online for government to disband the police unit to no avail. It was, therefore, no surprise that things finally got to a heel when a video of a young man allegedly shot and pushed out of a moving vehicle in Ughelli by the police went viral on social media.

The reaction was unexpected and spontaneous. On October 4, 2020, youths poured into the streets bearing placards and chanting #EndSARS. Many responsible citizens joined the protests and within days it had received global attention with the foreign media and celebrities lending their voice. Policemen scampered and SARS operatives disappeared into the thin air. 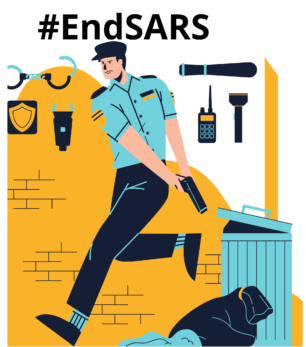 Despite the apprehension of fellow compatriots who believed there was an underbelly to the protest, I supported it for valid reasons like other Nigerians who have had invidious encounters with SARS operatives. However, I was soon disarmed when the presidency quickly acquiesced to our 5 point demands and disbanded the rogue unit. I called for an end to the protests so that Nigerians can partake in the judicial inquiry and contribute to the much-needed police reforms. Some of us also warned that a continuation will likely be exploited for pecuniary gains by fifth columnists.

Now in hindsight and juxtaposing the different reactions to the two aforementioned protests one begins to wonder if #EndSARS was truly about ending the notorious unit for some? Or was it about ending the Buhari administration?

It would appear that some of the #EndSARS propagators had a different agenda. Because unlike the #OccupyNigeria leaders in 2012 who fizzled out when the Jonathan administration reversed the fuel price increment, the #EndSARS protesters refused to budge even after the presidency had accepted our demands. They maintained the blockage of critical economic gateways like the Lekki Toll Plaza and Lagos-Ibadan expressway thereby denying other citizens the right of free passage.

We may agree that we are all hypocrites because as a fan of President Trump I wasn’t entirely against the DC protests but the cogitation of burning your motherland because of your dislike for her leader only to defend the ‘democracy’ of a ‘saner clime’ because of the same reason is a form of hybridized colonial mentality.

To me, the apparent collapse of the protest cannot be detached from the absence of a recognizable leadership hierarchy and an articulate strategy. The aforementioned factors were responsible for the inability of the protesters to manage the massive disinformation and propaganda around the protest.

There was little moderation as social media got saturated. Twitter, in particular, became the foremost platform for the dissemination of incredulous figures and stories some of which were serialised by the BBC.

Whether the subsequent hijack of the protest and its attendant loss of lives and property was orchestrated by government agents or opposition elements, the aim of the protest was finally defeated as what started in unison became politicised, polarised, violent and ultimately kissed the canvas.

Today, about three months after the alleged killing of innocent protesters by our soldiers at the Lekki Toll Gate no tangible evidence has been produced to prove that the soldiers actually shot at and killed protesters let alone commit a massacre.

Allegations that the soldiers carted away the corpses forced members of the Lagos state judicial panel to pay an unscheduled visit to the military hospital in Ikeja. They met an empty morgue as the facility was undergoing a renovation.

It would seem that Nigeria as a nation in itself presents a problem so enormous that it obscures the ready solution — its people. The irresistible temptation of social media trivia whereas there are seemingly intractable obstacles to our collective development is mind-boggling. It brings us to some crucial questions. How many of the presumed leaders and our celebrities showed up at the judicial panels? Where are the CSOs and youth organisations across the country? Who and who indicated an interest in cooperating with the police reform committee to project our 5 point demand? How many of those who kept vigil at the toll gate turned out during the bye-election for Lagos East senatorial zone the following month?

These questions underscore the belief of many that #EndSARS was a preplanned project with a devious agenda but was joined by millions of innocent citizens who believed in the noble cause of dismantling the unregenerate police unit. Now we may have lost the modest gains made initially. The police are back with roadblocks, they still brutalise the masses and only have just allegedly killed a mother and child while in pursuit of suspected internet fraudsters in Warri, Delta state!

For the average Nigerian youth, it can be alluring to get carried away by the prevailing sentiments. We are often easily cajoled by flowery catchphrases and hashtags such as change, restructuring, our-mumu-don-do, red card, Atiku is coming, revolution now and the rest of them. They are zingers that pack an emotional punch that is often short-lived. Yet, we immerse ourselves in the latest slogan by taking sides, dissipate humongous energy in abusing each other, and end up achieving little.

Nevertheless, I believe that people are entitled to their own truths. After all, there can be little doubt that a majority of Nigerians want a better country. We only diverge in the who and how. That is why we must keep expressing our views. We have to keep speaking, writing, protesting and more importantly voting. But we need to do these to foster dialogue and critical thinking with the precise aim of finding solutions to sociopolitical problems.

Going forward, future protests should have a face, a leadership structure and a defined methodology to manage information and subsequent engagement when the authorities call for dialogue. It matters little if it is the face of the opposition. If General Buhari protested fuel subsidy removal what stopped Atiku from joining the youths at Lekki Toll Gate? Many would have still supported the protests regardless because ending SARS is a popular cause.

I know that reforming our monumentally corrupt police force is a long journey but we have to start somewhere. A country of over 100 million youths needs to create jobs, not murderous policemen.

So to build on the gains of #EndSARS, we must demand the immediate release of all bank accounts frozen by the CBN. The IGP must get the roadblocks out of our highways. There is a new consciousness around police brutality and the need for a change. The policemen, though back on the roads are aware of this. I have seen it and you have seen it. It must endure.