Home Essays A Children’s Party Would Have Been Better by Oluwaseun Osanyinro.
Post Views: 76

The smile of the guy beside me turned my stomach inside out. I was not sure he was smiling at me or smiling at his imagination. Well, nobody seemed normal in this place. I adjusted on my seat uncomfortably and looked around for my best friend to be sure I was not alone. When the old man sitting in front of me smiled, I almost had nausea. What he was thinking of, with his crooked teeth can not be good and how my friend located this hell hole was still a mystery. I guess depression turned her to a detective. I finally realized one could be intoxicated by proxy and one could smoke without necessarily holding the stick or pipe because I was practically inhaling whatever the guy next to me smoked. I was so sure I could get high if I stayed a minute more yet I did not stand to leave. I wanted to be here for Sharon as the cool headed best friend I was, taking her safely home if I could last one more minute in this place.

I should have known sitting quietly in a corner was a kind of invitation to the male species around. The smiles should have been a give away or the constant side comments as they passed by. The first came and asked for a dance which I politely declined. The second offered another drink and I refused. For a while, I enjoyed some sort of peace while Sharon moved from one dance partner to another to a beat that could wake the dead. Depression had escalated to throwing caution to the wind which she would probably regret tomorrow morning. My peace was however short-lived when this man walked towards me. He had the arrogance of a peacock with his two side men. I braced myself to reject his offer of which I regretted.

As he walked towards me, I adjusted and mentally called my best friend. It was high time we left. He ordered another round of drinks to the hails of his fans and smiled at me like he had done something worth praising. They were drunk already so another round made no difference. He must have thought he had won me over as he happily asked what else I wanted. My response was not in words but action. Standing up and trying to walk out, I found myself directly in front of him. Silence must not have been his strong forte because he barked or rather shouted. By this time, the club quietened and everyone turned towards us. I wanted the floor to open up and swallow me. He once again asked in loud voice where I thought I was going. He went on to declare who he was, what he owns and how he could have anything he wanted. Obviously not me.

Standing became uncomfortable, my tongue was tied, the atmosphere was foggy and I was feeling light headed. I quietly told him I was so sorry but I had to leave immediately. I tried side stepping him but he moved directly to my path again. The whispers were not helping me think clearly and the walls were beginning to go in circles. Great! I was intoxicated. My admirer came closer making me step back as he got himself the nearest chair and sat. My gaze moved from him to the crowd watching us. On sighting my friend, I began searching for the nearest exit to get away from Mr Arrogant. I could not stay one more minute. The bar man thought it wise to provide the drinks at that moment and the sight increased my nausea. Seeing no more drama, the crowd dispersed back to the dancing floor and tables while I battled with puking at the feet of Mr Arrogant.

Finally, Sharon decided she had had all the excitement her body could take for the night and walked towards us. She blinked her lashes at Mr Arrogant causing him to smile sheepishly while she explained that I needed to go urgently. He grudgingly accepted and I almost shouted Hallelujah but halfway into my excitement, I emptied my stomach at his feet, saw the walls spinning and then black. I quickly came to while being carried out but did not open my eyes. A lady can only face embarrassment once at a time and I knew Mr Arrogant still around the corner. Watching with a partially opened eyes, I made sure Sharon was the only one in the car before I jumped up and demanded she moved over while I take over the wheel. I was already humiliated but not planning to die soon.

In her shocked daze, she moved over and watched me speed away from the club house. She wanted to understand what happened back there but I was not ready to explain. I had been drunk on, smoked on, shouted at, bullied, laughed at and worse, fainted in less than two hours and I was not planning to revisit those memories. If I see Mr Arrogant, it would even be too soon. Our journey continued in silence while Sharon slept. In the silence, I swore never to visit a club house or accompany a friend to any smoking and drinking environment. My stomach was still inside out and Sharon was sleeping peacefully. Next time anyone is depressed, I would suggest a children party if any party at all. 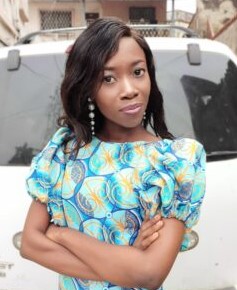 Let Me Do Your Make Up by Arueze Chisom.