It is not that I don’t love the sound of music playing so high that one couldn’t hear oneself, or the smell of freshly tapped palm wine on a late night, or that intoxicating feeling of love that takes all pains away. I just couldn’t afford the consequences. I had been raised not to desire things like that, not because my background was Godly, but simply because it was my dad’s belief that I didn’t deserve happiness.

In his exact words, “Ebere, your life is a punishment, you will live a very long life, but it will be a life of misery, it has to be a life of suffering, unless people will die”

Twenty years has passed but I still remember that day as if it was yesterday. How can I forget that very cold Saturday night that redefined who I was, it was one of those days when it rained heavily and the streets were covered with water so high that it could have moved Noah’s Ark. I had worn a pink princess pleated dress with a red bow on my head. My older siblings were seated on the sofa watching their favorite TV show – Tom and Jerry, while I knelt down with my back facing the television as instructed by my dad. I had been kneeling for about three hours when he came with a five inches thin stick and flogged the hell out of me.

Despite the flogging, despite the fact that my siblings could do many things I wasn’t permitted to do; watch television, play after school, visit friends, eat snacks, pet the dog, I didn’t hate my dad for as a little child I hung on his every word so much so that when he told me that the dog died because I touched him, just the way mother had died on this very day 5years ago when I came out of her, I believed. When he told me that the reason my birthday can never be celebrated was because I am an agent of death, thus my happiness will always result in someone’s death, I believed. When he said that my suffering wasn’t enough that is why Billy our dog had died and if I continued to be happy, he and my siblings will die as a result of it, I believed.

Although it was the first time I heard those words, it wasn’t the last. For that day birthed a new tradition. It was his yearly birthday gift to me. As the years passed by and with the help of my step-mum Agnes, he got better at making me believe I was cursed. For twenty years of my life I believed everything he said I was until I no longer believed, or rather I saw reasons not to believe.

It has always been my motto to avoid anything that could bring happiness to me, for I thought my happiness meant someone’s death. So, despite the pleas of my course mates to join them for lunch at the cafeteria after lectures, I bluntly refused. I hurried home as usual, but this time, to a scene that changed my life.

It was about 2’oclock on a hot Tuesday afternoon, I was surprised to see my dad’s car parked in front of the house for it was quite unsual for him to be at home at this time. I could hear my dad and stepmom arguing but I wasn’t sure what it was about. I was about entering the sitting room when I heard my stepmum say, “it was not Ebere’s fault”, to which my dad responded “Everything is her fault, if she hadn’t killed her mother, she would have been here to prevent this”.

Upon hearing my name, I paused. I thought, If I should go into the sitting-room I should at least understand what was going on, so I kept listening to the conversation.

Agnes (step-mum): Ebere has tried, you know it wasn’t totally her fault. Your first wife died due to complications. She had to make a choice between herself and the baby, and she choose to have her baby, it was her choice.

Dad: I don’t care what you think, it was Ebere’s fault my wife died and she has to keep paying for it every day of her life.

Agnes (step-mum): But she has already paid dearly for it, I’m even surprised she hasn’t broken by now with all we have put her through. I think it is high time we let her know the truth.

Dad: She doesn’t have to know.

I couldn’t take it any longer, I rushed out from behind the door where I had been hiding. They were both surprised to see me and asked how much I had heard, to which I answered “everything”. I confronted my dad on why he had lied to me my whole life, making me believe that every bad thing that happened was because of me. And why he was doing everything in his power to make it seem that way.

He wasn’t the slightest bit apologetic, he said I was the sole reason the love of his life was dead. He said her death took everything away from him and for that I had to suffer.

At that moment I felt a lot of things, sadness for having an insane father, regrets for believing his every word, but most importantly I felt happiness – happiness because I knew then that I wasn’t cursed, because I can finally live life the way I wanted, because I could finally experience happiness without fear of the consequences.

I immediately rushed into my room and began packing my bags, I could take care of myself, I thought. I had a part time job and I could live at Cynthia’s house as she was one of the few who I had told my life story and had always offered me a way out, which I always refused.

As I left our family duplex determined to live my life to the fullest, my dad kept shouting “Ebere come back here, you will get people killed” but I paid no heed.

At Cynthia’s house I experienced all the happiness I had missed out on. I could eat whatever I wanted, go wherever I desired and do whatever I felt like doing, and nobody died. This new experience was paradise on earth to me.

Exactly Twelve weeks after I arrived at Cynthia’s house, I got another call from my dad telling me to spare people from hurt and come back home. It was Cynthia’s birthday day and I wasn’t ready to let anything spoil my fun so I joined her and a couple of some friends to a popular club to celebrate. The party was a memorable one, although Cynthia was the celebrant, much of the attention was on me as they all wanted to make the first party I had ever attended memorable.

On the drive back, we sang along to the music playing on the stereo when a blue pickup truck swerved in front of us, and in a manner of seconds there were flashes of light, sounds of shattered glasses then darkness.

When next I saw the light, I was lying on a bed with bandages at various point on my body and my leg hung high in the air. Besides me was a woman dressed in scrubs and a man with a stethoscope around his neck. Upon realization that he was the doctor in charge of the hospital where I was admitted, I asked what had happened.

“You were thrown out of the car during the accident, but your friends were not so lucky. They all died……………fire…………beyond recognition.”

My grief couldn’t let me focus on his words. My mind drifted and my life flashed before my eyes, the only friends I had in this world were now dead because I decided to be happy for twelve weeks. Daddy was right after all, my happiness meant people’s death.

At that moment I couldn’t pray for death because it seemed to be an easy way out, so I wished for sorrow, for sadness and for pain because I thought I was undeserving of everything good.

Augusta Ndeche is an Accountant by profession, but also has a passion for creative writing and Fashion designing. She hails from Anambra State and can be reached at ndecheaugusta@gmail.com 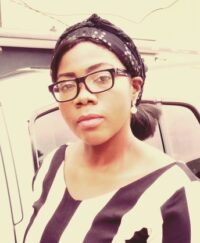