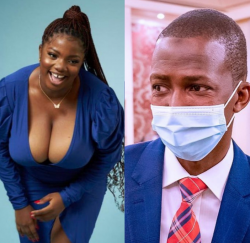 Our popular BBN zaftig accused the eagles of invading her nest at dawn.

She said she was bullied by the red jacket boys. That her mother had a panic attack. And that she was traumatized..her voluptuous body still shaking like dogoyaro leaves.

That would be some delightful shaking.

I can bet that at least one cocky official must have fired spunky shots from the lower rifle.

The EFCC must be mad! Don’t they have better things to do? Like arresting Abba Kyari?

BBN fans were livid. They threatened fire and brimstone. Many queried the propriety of executing a warrant at odd hours.

Well, they can ask Falana who was recently fact-checked on that.

Others wondered if they also had a search warrant for her flat.

Again, naturally, a warrant for the premises should include everywhere.

One promised to sue the eagle on her behalf for 1 billion!

How can they break into his idol’s house by 5.am? That’s an invasion of privacy. We are not in a lawless country for Chrissake!

The screaming headlines were all over the net. EFCC this and EFCC that.

And the usually calm Bawa was forced to explain.

The statement claimed they were there to execute a search warrant on the building which was home to 9 suspected internet fraudsters.

Here we go again. Surely not after the much-publicized Hushpuppi saga.

But don’t leave me yet.

The statement further claimed that our bosomy darling was nowhere near her apartment during the raid. And that her sister refused to let them in so…

But our soro soke generation will have none of that.

They trashed the statement as silly justification of nonsense and demanded an immediate and unreserved apology.

Now, wait for it.

She was taken straight to the ‘dairy’ room in Ikoyi for necessary lactation..oopsie! Sorry interrogation.

This time the internet exploded.

The entropy of the vitriol was sky-high.

Our coconut heads likened the EFCC to SARS. And vowed to end it too.

#EndEFCC was coined. But it refused to trend.

However, the vibrations persisted.

But as always even the supposedly enlightened Nigerians aren’t as informed as we may think. So I will drop some free knowledge here.

Back in the days, a 1994 movie titled Probable Cause forced me to look up the phrase.

From what I gathered “the facts and circumstances within an arresting officer’s knowledge are sufficient to warrant the officer to believe that a suspect has committed, is committing or about to commit a crime”. Probable cause is presumed until the contrary is proved.

Could it be that the red jacket boys suspected that their targets had dealings with the occupants of Dora’s flat?

Well, there is a possibility that Dora baby could have felt that her neighbours were fraudsters but like many Nigerians, she sees them as normal “hustlers” in our rough economy.

Nevertheless, it must be stated that whether or not the EFCC was right in their actions our endowed lady retains the right to sue.

But I doubt she would do this. Knowing how our security agencies operate I’m willing to bet that she may have been ‘advised’ to let this slide or….

And I am also willing to give Bawa a pass on this one. He has been professional since taking over from the crude and gaudy Magu.

Unlike the NPF the EFCC still has the backing of a majority of Nigerians. A chesty affair with a social media ‘influenza’ will not erode that goodwill.

The funny thing about all this was that through all the excitement, my friend the Bishop of Kanta-Brewery was the most annoyed person.

The internet had no video of Dora baby flapping her buxom jugs as she struggled half clad with EFCC officials.

That boy will not make heaven.

What Do You do for a living?