On Wednesday the 6th of April, 2022 a military tribunal confirmed longstanding and widespread suspicions that Mr. Compaoré, ex-leader of Burkina Faso, who now lives in exile, was behind the killing of his compadre, predecessor, and Pan-African leader Thomas Sankara.

The former strongman, Mr. Blaise Compaoré, was sentenced to life along with his then-security chief, Hyacinthe Kafando, who received a similar sentence. Eight others were implicated as accomplices to Thomas Sankara’s assassination, both for complicity and bearing false witness, including Gilbert Diendere, Compaore’s right-hand man, who is already serving a 20-year sentence over an attempted coup in 2015. Three others who were wrongly accused, over the years, of having a hand in the death were fully acquitted.

Mr. Blaise Compaoré was tried and sentenced in absentia. He fled for exile to neighboring Ivory Coast when his leadership was deposed by a popular uprising in 2014 after having ruled the nation for 27 years with an iron fist. Sankara’s assassination coincided with a coup that brought Blaise Compaoré into power. He won elections from 1991 through 2010 in what were considered unfair circumstances. The 2014 Burkinabé uprising began as a result of his attempt to amend the constitution in order to extend his 27-year term.

Mr. Compaoré, however, is unlikely to spend any time in jail soon. He refused to return to Burkina Faso for the trial, and Ivory Coast declined to extradite him. Blaise Compaoré has always avoided conversations surrounding Thomas Sankara’s death, and has consistently denied having played any role in the killing of his former comrade-in-arms. However, his explanations and circumstances over the years have remained inconsistent.

The tribunal, which began last October, 34 years after Mr. Sankara’s death, found the men “guilty of attack on state security, complicity in murder and concealment of a corpse.” The tribunal was halted in January following fresh military coup and unrest in the nation during the period leading to its elections; one of many since its independence from France in 1960. This has led to Burkina Faso facing sanctions from ECOWAS, the regional West African body.

Mr. Sankara’s widow Mariam Sankara said she was “satisfied” with the verdict, although she “wished” that the main suspects were present.

“It is not good that people kill other people and stop the process of development of a country without being punished,” she told reporters.

Who was Thomas Sankara? 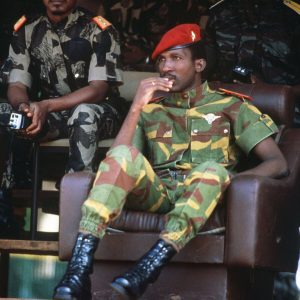 Thomas Sankara is one of the most esteemed leaders from Africa. A firebrand Marxist revolutionary and Pan-African champion, Thomas Sankara became one of the youngest presidents in modern African history when he rose to power in 1983. Over four years he gained a reputation for principled rule and spirited defiance of the West that earned him adulation across Africa.( New York Times) He was nicknamed “Africa’s Che Guevara.” After he seized power with his close friend Compaoré, Sankara ushered in sweeping reforms in an attempt to reduce poverty in the country, then known as the Upper Volta. It was Sankara who renamed the country Burkina Faso— meaning “Land of the upright men.”

During his regime, he prioritised empowering women, environmental policies, food production, and poverty eradication. He swapped luxury official cars for cheaper ones. Mr. Sankara’s anti-imperialist stand angered the West, especially the former colonialists of the nation. His every step was in total defiance to their whims and propaganda. Mr. Sankara exuded so much authority with unbridled courage that at home, he faced many economic woes.

Following the conviction of Blaise Compaoré on Wednesday, the heavily protected courtroom in Ougadougou erupted with heavy applause. The trial served an effort to establish the truth about Mr Sankara’s death. It also represented an attempt, perhaps belated, to impose justice for a military coup in a region with a long history of military takeovers.

Sankara’s family, in expressing what the verdict meant for them, said they can now hope to hold a proper funeral for the assassinated leader, who was buried in a pauper’s grave dug by prisoners at night within hours of his death. For them, this is not a moment of satisfaction, “but at least we can now grieve,” said Paul Sankara. 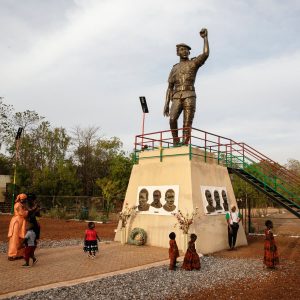 The legacies of Thomas Sankara are still widely celebrated both in his home country and all over Africa. His images adorn cars and motorcycles, and t-shirts. Tourists from far and wide visit a giant statue of the Pan-African leader, situated a few yards away from where he was shot and killed.

Indeed, this is bound to be one of the historic moments in Africa, for our values and our judiciary.