The nineteen year old turns the thought over and over.
He will go to work.

At this, he clutches his stomach, folds his knees to his chest. From behind his glass window—the sky washed, a brilliant blue; outside, plopping sounds—pat. pat. pat.

He feels his head.

So he pushes the blanket off his body. He does not feel cold either, even though it rained heavily last night. He draws up his knees, closer, to his chest. Whimpers, clutches his stomach. Applies pressure. No, he can’t pull through this. He won’t go to work today.
The door bursts open. Kai, ooooo, he hisses. There stands his mother in the doorway, eyes shaking in sockets. Her fingers are wrapped around the door handle. Her words hitch. “Jerry…still not.. Still not…better?”

“No,” the boy wriggles on the bed.

“Okay, then. Let me get you food so you can take drugs.”

It takes a while, but his mother eventually leaves.

2.
Vernen waits for his mother to leave the house first.

Then, in one swoop, he heaves the swollen mass that is his school bag, stuffed with clothes.

“Where are you going to?” his little sister quips.

He pushes at his sister. “Get out of my way! Idiot! You can go tell Buhari if you want.”

Outside, his little brother calls, voice merely a whisper. “Vernen.” But Vernen forges ahead nonetheless, feet quick against the tarmac. All that roaring in his head, the tightness of his muscles, his dry mouth, hot breaths. He is never returning, never! Nonsense and nonsense.

3.
Shimaver’s mind is insistent. Check your bag. I swear, you’ve forgotten that file.

I am sure, he retorts. I am sure I took that file.

He pulls to the side of the road, set his bag against the body of his motorcycle and begins unzipping. He parts his bag, and there, the white of the file staring back at him.

Doesn’t it feel great to be certain? Abi, you want a repeat of last time? You would have gotten that job.

His phone vibrates against his thigh. Having fished it out of his pocket, he holds it aloft, palm curled up against it. <Mon Armor> Babe, I’m not feeling well. I am dying.

Immediately, his heart stops and the world feels cold. So, so cold. Air becomes the edge of swords cutting with each staggering inhale. Once, twice, he matches on his brakes. Not now, not now. And as if the motorcycle heard, as if it can also hear the pounding in his ears, it groans to life. Shimaver swerves it around, bursting into the road even though there’s a train of vehicles, a lorry in the lead, fast approaching. Around the bend, the text sears on his consciousness: Dying. It is bitter. The phlegm in his throat. The trickle of sweat seeping into his lips.

The motorcyclist he overtakes yells at him, but whatever it is he said gets lost in the roaring wind. He did not even see the man. Does not even remember that the time for the interview he set out for this morning is two minutes away. All he knows is the road unfolding to him, the liquid in his eyes. He runs into potholes, is rattled. He does not slow. Rather, he aces up his speed, the only palpable thing to him now. Memories dance in his mind. His boyfriend leaping out on him and pressing his lips to his. “Jerry, someone could see us.”

“That was quick. And can we not soil today already? It’s my nineteenth birthday, Shimaver. My last as a teen.”

All these swirling in his mind when he rams into hardness, a furious shove, and before he knows he is in the air and then sliding along the tarmac. There’s so much screaming, “Jesus, Jesus,” a spiking pain in his back, throbs kicking under his skin. “Ah.”

So he gets up, quickly. But then people are pouring in from everywhere, rushing towards his motorcycle lain on the tarmac, towards a figure. No, no, no, he jostles his way forward. A boy. And blood pooling around his head. No, no, no he says, dragging up the boy up against his body while another man helps take off the pregnant school bag.

“Vernen wam o. Vernen wam o,” a voice is wailing. “Vernen.”
A woman emerges, pushing the man away. Her face is stained with tears. One glance, and Shimaver realizes the semblance. The boy’s mother. Lord Jesus, what have I done?

Panting, panting, panting, the whole world spins. The sky meets the ground, then widens. People become wavy lines. But there is Jerry, stark and straight against the distortion. “Shimaver, Shimaver.”
His mother is behind him.

4.
Nineteen year old Jerry wants an explanation. He looks from his boyfriend to the bloodied boy and more tears fill his eyes. Vernen’s mother looks up to him. Her eyes are so red. “Uncle, look at your student o. Just look.” He looks. Vernen. Shimaver. His intestines no longer twists, his heart does now. So he begins to shout, “Okada, okada!”

But Jerry is not hearing. He keeps screaming, “Okada!” 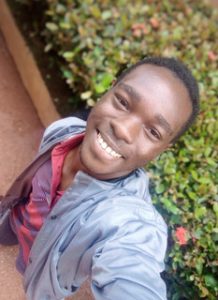 Mhembeuter Jeremiah Orhemba is Tiv and Nigerian. A 2021 ARTmosterrific artist-in-residence and first runner-up for the 2021 Kreative Diadem contest, his works have found home or are forthcoming in FictionWrit Magazine, The Shallow Tales Review, Arts Lounge, Eboquills,The Muse Journal, Agapanthus Collective, ARTmosterrific, and Fiction Niche. He wishes to attain the serenity of water, enjoys watching TK and Carlos kiss, and still loves AURORA and Christina Perri. He tweets @ son_of_faya.