Home Blog Trump’s Muslim ban is US tradition..only with a ‘Trumpet’ this time.
Post Views: 50

FACT: Just in case you’ve forgotten, Obama once banned immigrants from Venezuela. He also banned Iraqi refugees for 6 months and deported 2.5m people, more than any US president. 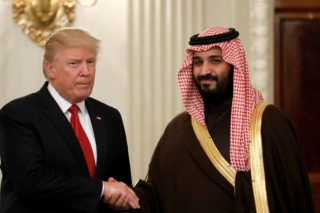 Despite my views on Trump’s stupid Muslim ban, examining his policies with regard to the American context will tell you the man is no fool. When I read this article last year I realised how smart the really is. He only made a promise informed by the prevailing fact that more Americans want Muslims banned from their country.

You see over the years it has been impressed upon Americans that they are at war with Islam since Bush declared his so-called war on terror. The media has not relented in painting a picture of ‘we against them’. This was unpacked in “Manufacturing consent” a book by Herman and Chomsky which proposed that the US mass media “are effective and powerful ideological institutions that carry out a system-supportive propaganda function, by reliance on market forces, internalised assumptions, and self-censorship, and without overt coercion”.

Make no mistake about it the SILENT majority love this policy but may not be willing to say so to appear politically correct, well with Trump political correctness is dead! Much as I see it as a stupid policy I cannot deny that he is fulfilling his promise to the electorate. That is why I ‘ve always maintained that a majority of Americans are ignorant. A point that often infuriates many of my good friends over there but very true nevertheless.

Back home you cannot help but laugh at some ignorant Nigerians who applaud the ban while hoping that Trump their new hero will deal with Buhari and the Muslims they loathe. Hear me now, the white majority whose ancestors occupied America and almost wiped out the natives no longer want ‘foreigners’ in ‘their’ land. They are now scared that in years to come they will become the minority, so they don’t want Muslims who disguise as refugees only to come and bomb them in subways and other public places neither do they want ‘lazy’ Africans who troop in to register for social welfare only to lay back on the couch and gobble down free pizzas provided by hard working tax payers nor Mexicans who keep chicken in the backyard to wake them up in the wee hours.

So Trump’s ban is in line with an age-long tradition only that his style of delivery is always greeted with so much media hysteria. The ban is in place all the same so the rest of the world will have to watch and see how it plays out while the grammar speaking minority of Americans who oppose it will have to live with it for the next 90 days. Ironically, the usual response of ignoble white supremacists when confronted with their shallow reasoning is “go back to your country”. And you can help but wonder where they ‘ll go if the real owners of the land should ask them to go back to their own country.

Analysing The Twitter Ban In Nigeria by Michael Ogbonnaya.