Home Blog The army medical outreach in Anambra and the extended consequences of propaganda.
Post Views: 40 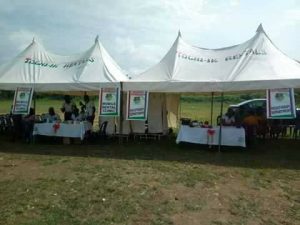 May the person you roused from sleep never wake up before you.~ Ignatius Uzus

In 2015 Honourable Dozie Nwankwo informed me about his foundation’s free eye care services at a burial in Enugu Ukwu. He simply told me to spread the word and I did. I also ensured my aged uncle who was suffering from cataract was adequately briefed on the benefits of such services. He went and today, he still has his sight thanks to the free surgery he received from the medical experts.

I woke up to a dull morning yesterday, the forecast wasn’t too good after we had enjoyed the plenty sunshine of the first week of October. I still had to go for the routine school run and on getting back I just glanced at my twitter TL and didn’t see any story worthy of derailing me from the piece I was writing about “the killing of Nigerians in South Africa”.

However, a few hours later I took another glance and noticed the trending story.

The tweets were coming in droves, what is happening in Anambra? I checked my facebook page and saw that some of my friends who know my reach as an Anambrarian had tagged me with the same question. The mushroom and IPOB leaning blogs unleashed their vuvuzelas “Buhari’s Fulani army injecting Igbos with monkeypox!!!” The mainstream media headlines also filtered in, there were captions like “Panic in Anambra as parents withdraw their wards from school over army medical outreach”

Quickly, I started making calls to verify the news. The first person I called was Governor Obiano’s aide, he told me to ignore the lies and propaganda by mischief makers. We laughed over a few campaign jokes and hung up.

As I went back to my facebook to post an update I saw that my TL was filled with pictures of parents absconding with pupils on foot, bike, and keke. The pictures depicted panic as in the news headlines. I called the aide back but he didn’t respond. I called a few other government officials I know, they said the information was still hazy and promised to get back. Then I remembered a friend whose dad is a supervisor of the Anglican schools in Awka South LGA and promptly rang him. He said he had been properly informed that the news was a hoax. I shook my head and by the time ABS released the official press statement by the SSG the damage was already done.

When it became clear that the panic was orchestrated by mischievous and unscrupulous politicians who spread the evil rumour for cheap political gains some of our so-called educated elite quickly switched to questioning the process, they queried the propriety of military medical personnel offering such services? they challenged government officials on the right of immunizing pupils without the consent of parents. They asked if adequate sensitization and dissemination of information was carried out?

This line of reasoning is utterly preposterous. For one, all over the world, these outreach programmes are normally carried out regularly by the military through specialized units like the medical corps and the army corps of engineers. They constitute the human face of the much-feared military and boosts its public relations.

Those questioning the right of medical personnel to immunize pupils without parents’ consent are either plain stupid or mischievous as no such thing transpired in the first place. They deserve no attention.

However, the valid question about the adequacy of sensitization and dissemination of information can be answered with the fact that similar programmes were successfully conducted in Imo, Abia and Ebonyi states. We saw pictures of General Ihejirika participating in the programme last week. Moreover, not too long ago a group of medical doctors flew all the way from Canada and the USA to offer similar services in Awka South LGA, we can be certain they carried out proper and adequate sensitization before coming down. A lady doctor I know was glad that they had a successful programme even as she expressed shock at the ignorance of our people on issues regarding health care.

Perhaps the best response to our sensitization disciples would be this cheeky question by another smart lady I know, “If the news that the Military was infecting the kids with ‘monkeypox’ spread as quickly as it did which led to the panic, why didn’t the real information spread as fast?”. The answer to this question can only be found in the lies and propaganda embedded in the recent secessionist agitations.

It will do us good to consider some of the consequences of spreading such stories without verification. A lot of enlightened people I know who scream restructuring still label our military “the Fulani army”. It may garner applause from the ignorant ones but to what end really? Even if some politicians in Anambra decide to dish out lies for selfish reasons, I believe it behoves the enlightened folks to verify the stories and put the right information out there.

The stories have spread across the nation and if we are sincere to ourselves they have not benefitted anybody, not even the lousy politicians that originated them. Perhaps the only beneficiaries will be the military officers who will sell off the already allocated drugs for Anambra state and pocket the proceeds.

A few days ago Senator Enyinnaya Abaribe told an audience in faraway New York that “he is a NIGERIAN senator”. Ohaneze Ndi Igbo has also made it clear that they do not want secession. Why do some still behave as if Igbos will secede tomorrow?. When shall we start thinking of re-integration in our national politics?

Of course, some will keep blaming the military, others will also blame the president. He is a man majority of Igbos love to hate. The hatred like I always say is mutual. The valid question I keep asking is who loses? Is it a man that has accomplished almost everything in life or a region that is facing the worst political stagnation since the civil war?

Disparaging your nation’s military is shooting yourself in the foot and in this case twice!

1. Anambra people will lose the benefit of free medical services.

2. You further alienate the South East region from ‘real’ power.

After all, Fela sang that “the civilian president wey de there na soldier de protect am”.

It is time to pause and think. A friend put it thus:
South East started the present agitation for restructuring.

South West cashed in on that and held a conference on restructuring.

North West is dialoguing in Kaduna.

When will South East that started the agitation hold theirs?

May the person you roused from sleep never wake up before you.

How the South-East should respond to Amotekun.