Home Blog For Caroline Danjuma, it is a matter of the heart.
Post Views: 2 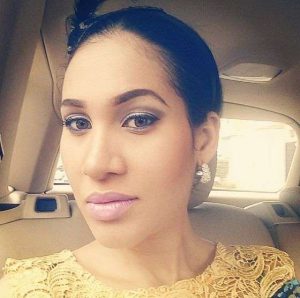 I have woken up to see all sorts of allegations and it is really laughable because the whole idea is to divert the attention from the questions I am asking about what happened to Tagbo. I will address this once and for all. Number one, I met Tagbo when I was legally divorced and out of my ex’s house to start a new life. Yes, we were dating. ~ Caroline Danjuma

Since the unfortunate demise of Tagbo Umeike which the media breathlessly reported, a cursory content analysis revealed that the above statement by Caroline Danjuma equally elicited as much interest from many as other issues surrounding the tragic incident. Public opinion has been divided and filled with allegorical nuances.

Some including yours truly had questioned why she had to bring up the issue in the first place but on second thoughts I  believe she has done the right thing by accepting she was dating the late Tagbo. I mean why would she even deny or try to conceal a fact that is out there? For one she is now divorced, again they are in the same age bracket, she is 37 and he was 35 so what the heck?

Others labeled her all sorts and even insinuated infidelity as her last child is rumoured to have a striking resemblance to the late Tagbo. Well, that is her cup of tea and Musa Danjuma’s cup of coffee.

She still has a long life ahead of her and from what I gather she is a kind and caring person, perhaps that explains why she has been very emotional about the controversial death of her boyfriend.

Personally, I may have some reservations about the manner she jumped into the issue with her ‘tweet and delete’ but she is human and such spontaneous outbursts are understandable in sad incidents like this. This is why I can’t seem to understand why her honest admission has met disapprobation from some members of the public.

Could it be that her previous public spats and the baggage of her crashed marriage are blended into the perception in certain quarters? Perhaps she wouldn’t be receiving so much flak if she had been a male divorcee. Whatever the case I think we should feel her pain because matters of the heart can be deep and very challenging.