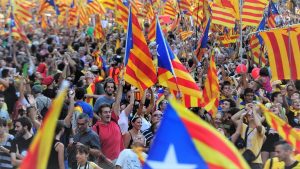 On the 1st of October 2017, the Catalans voted in a controversial referendum that now has the global media focused on the wealthy North East region of Spain.

Catalonia is an integral part of Spain whose quest for independence dates back centuries, with its own distinct language and culture it is also blessed with abundant resources. Its contribution to the Spanish economy doubles that of Scotland to the UK. With independence, the region would have a GDP of about €270 billion and a GDP per capita of €30,000, which would make it wealthier than Italy. The dominant feeling among Catalonia’s political elite is that a people whose taxes sustain the central government should expect more in return. It is therefore not too difficult to see that even if previous bids for self-rule were driven by a perceived difference in identity the current one has its origin in political economy and resource control.

Firstly, let us not forget that the referendum of 1st October is illegal. Spain’s democratic constitution of 1978, which had overwhelming support from the Catalans back then gave the region huge autonomous powers but nevertheless affirmed the indivisibility of the Spanish nation. The constitution can only be amended by the Spanish parliament. So unlike the UK, where an autonomous Scotland was duly authorized by the central government in Westminister to hold a referendum, Mr. Puigdemont’s referendum was not only in contravention of that constitution but was also outlawed by a Spanish court. You simply cannot eat your cake and have it.

The referendum went ahead all the same and despite a police clampdown people turned up on polling day to cast their votes. If the bourgeois Catalan nationalists who narrowly won the regional elections two years ago banked on the long-held sentiments against Madrid then they had another thing coming.

A break down of the official figures did not show a record turnout as was touted. As a matter of fact, it was less than 50%. Could this be a reflection of an earlier poll that revealed only a similar percentage of Catalans want a referendum if the Spanish government objects? It could sound perfunctory to assert that a ‘reticent’ majority oppose the independence bid but given the aforementioned facts can one say otherwise with certainty?

The following week thousands poured out into the streets of Barcelona to protest against the independence referendum. Similar pro-Spain protests erupted in Madrid and other cities across the country. While some called for dialogue others insisted that the authorities should take a tougher stance against the “golpistas” (coupists).

The stage was set and we all watched mouth agape in anticipation of a major European crisis as the October 10th date approached for the Catalan leader to declare independence from Spain. Alas, it came to an anti-climax as Mr. Puigdemont only signed a document but failed to publicly announce that the region was now an independent nation. His words:

“We propose the suspension of the effects of the declaration of independence for a few weeks, to open a period of dialogue, and if everyone acts responsibly, the conflict can be resolved in a calm and agreed manner.”

My first reaction was to shake my head and mutter “politicians!”, when will they altruistically carry along the masses they claim to lead? There is little doubt that the turnout at the polls would have been much less if many had foreseen this. Juxtapose all these and one may begin to see why Mariano Rajoy and his cabinet emphatically insist on a unified Spain.

Now the central government is set to activate Article 155 of the constitution, which enables it to revoke some of Catalonia’s autonomous powers and take over the running of the region. We are witnessing a series of events which will aggravate the already sour deadlock. The pro-independence Catalan National Assembly Assemblea Nacional called on consumers to put pressure on banks that moved their official headquarters to other locations in the wake of the political crisis. 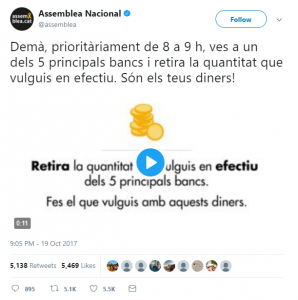 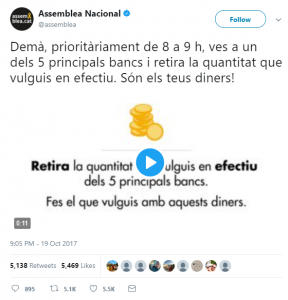 There are reports that some customers are already complying with this directive. However, there are no indications that the intended impact of such action is being realised as the affected banks claim that business has been largely normal. Moreover, whatever effect that may have was already proactively countered with a swell in deposits as the banks moved their legal domiciles last month.

Let us remember that before the invocation of Article 155, Mr. Puigdemont had failed to respond unequivocally when Prime Minister Rajoy asked if he had declared the region’s independence from Spain.

So what exactly does he intend to achieve? What strategy does he want to deploy going forward?

It certainly does not include the “real sauce” if you know what I mean, for even in a modern and civilized Europe secession has often been characterised by armed conflict when branded illegal by the central government. And bearing in mind that the EU would naturally discourage separatists especially as it is locked in a tricky Brexit negotiation it didn’t come as a surprise when the union declined Puigdemont’s mediation appeal.

So when the Catalan leader rather than declare independence said in a long speech that they “have been prepared to engage in whatever dialogue was necessary to do so in a mutually agreed way”, one begins to wonder. Did he suddenly realise that dialogue is essential after the fact? Need we remind him that all the wars in the former Yugoslavia started with a referendum? Or that Iraq is on the brink of another civil war because of the colossal miscalculation of the Kurdish independence declaration? We can only hope that these realities informed the cautious choice of words.

As the push to implement the provisions of Article 155 begins in earnest, the coming days will likely be more chaotic if the bedlam witnessed before and after the independence poll is anything to go by. It will be proper for both parties to have back channels for a negotiated political solution despite the usual tough talk. Let us hope that they will settle for a financial deal in the same manner as the government managed with Basque separatists in 2011. But where will a struggling Spanish economy find the funds? This is why Rajoy should have been more responsive and Puigdemont more circumspect.

The coming days will be slow, but it will also reveal if Spain is going through an avoidable political crisis.

VAT Legal Tussle: The Implications And Solutions by Chukwuemeka Oluka.

Avoiding An Exacerbation Of The Education Crisis by Victor Okonjo.