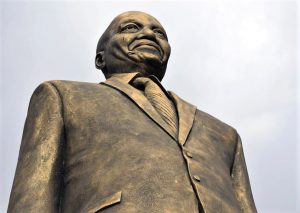 I had restrained myself from writing on the Rochastatue outrage but this piece originally published by Daily Trust is an irresistible satire by the prolific Mahmud Jega..Read on.

In these times when Nigerian leaders at various levels are regularly accused of being bereft of earth-shaking ideas that could propel the country forward, the erection of a statue in Imo State in honour of South African President Jacob Zuma will be remembered for a long time as a most visionary deed. Governor Rochas Okorocha hit on this brilliant idea that could bring into Imo State giant South African companies much bigger than MTN, DSTV or Stanbic.

The misguided riots and unnecessary furore generated by the statue shows that many Nigerians do not know the inspirational value of statues. They can inspire youths and can also propound a vision more effectively than any speech. I, therefore, recommend to Federal Government and all state governments in Nigeria to borrow a leaf from Owelle Rochas Okorocha and erect giant statues in their states in celebration of major causes, controversial events and even bloodthirsty personalities.

For example, Rivers State should immediately erect an oil statue of Donald Trump in the centre of the Garden City. Governor Nyesom Wike appears to take his cue from Donald Trump in serial disruption of the status quo. He is a governor who dresses informally in T-shirts, appears unannounced at project sites, berates contractors and state officials in a husky voice, rushes to the home of a federal judge to shield him from arrest by DSS agents and is always firing broadside at Rotimi Amaechi, Dakuku Peterside, EFCC and INEC. He will get more inspiration from a Trump statue and hopefully will soon adopt a “Rivers First” philosophy of rule.

Approaching Gusau from Zaria side, I always take due notice of a rusty billboard just after Yankara announcing, “Welcome to Zamfara State. Farming is our pride.” It is time to replace this billboard with a nickel statue of Venezuelan President Nicolas Maduro. These days, after a court blocked Zamfara State Government accounts in twenty banks, the state’s economy closely resembles that of Venezuela with workers going without pay and pouring venom at rulers during prayer sessions. Governor Abdulaziz Yari is said to spend most of his time in the cabin of an aircraft and whenever he is not airborne, he is leading an NGF delegation to Aso Rock to urge the release of more Paris Club refunds.

The youthful Governor of Kogi State, Yahaya Bello, should erect a steel statue of former Ivory Coast president Felix Houphouet-Boigny to replace the roundabout he demolished in central Lokoja. There is much restiveness among Kogi State workers, pensioners, lecturers and students of tertiary institutions, state lawmakers, opposition and ruling party politicians, not to mention supporters of Senator Dino Melaye due to cries of injustice. Houphouet-Boigny once said that he prefers injustice to disorder because he had never seen anyone who died from injustice but he knew many people who died from disorder. This philosophy of life will greatly assist Governor Yahaya Bello to put a lid on unrest and I urge him to erect this statue immediately.

Osun State needs more than a statue of Houphouet-Boigny. Given that workers in the state currently receive what is called a “modulated salary,” that is, a percentage of their salary with no date for the payment of the balance, what is needed in the centre of Oshogbo is a cocoa statue of Greek Prime Minister Alexis Tsipras. Just like Osun State, Greece went on a spending spree during the good times and freely spent Euros while the German Chancellor and her voters picked up the tab with a series of bail-outs. A statue of Tsipras in central Oshogbo is a reminder to Abuja that it must behave like Germany and rush in with more bail outs.

I have been wondering why the Borno State Government and the Nigerian Army did not jointly erect, in the approach to Sambisa Forest, an IED statue of Thiruvenkadam Velupillai Prabhakaran, late leader of the Liberation Tigers of Tamil Ealam, alias Tamil Tigers. Boko Haram Imam Abubakar al-Shekawi, who is thought to be holed up in Sambisa, will derive a lot of inspiration from that statue. Throughout human history many rebels had sworn to “fight to the last man” but Prabhakaran was one man who literally did so. Although the Tigers’ control over the Jaffna peninsula kept shrinking until it was down to a few acres, Prabhakaran fought on until his body was found among the very last Tiger fighters. From all indications that is Shekau’s intention too, so a statue that reminds him of military history will be of much help.

Maybe the Plateau State Government should identify one of the state’s nice rolling hills and erect on it a tin statue of Pol Pot. Everyone was congratulating Plateau State on the return of peace there after many years of inter-communal bloodshed. Unlike former governor Jonah Jang who was widely accused of being a party to the crises, current Governor Simon Bako Lalong is a peace-loving and level-headed man. Yet, mindless blood-letting is threatening to break out again under his watch. A statue of the late Khmer Rouge leader under whose rule an estimated two million Cambodians died within a few years is a good reminder to those who kill without sparing women, children, the sick and the elderly.

In nearby Taraba State, Chinese engineers are about to climb up the Mambilla Plateau to begin building a hydro-electric dam. I urge the Taraba State Government to ask them to tarry awhile and first erect twin cowhide statues of former Bosnian Serb leader Radovan Karadzic and his military commander General Radtko Mladjic. They should add a goatskin statue of former Serbian President Slobodan Milosevic approvingly gazing in the background. These Serb leaders invented ethnic cleansing in the modern world, and their statues will be a source of inspiration to Mambilla tribal militiamen who recently carried out a Srebnica-like atrocity.

Before the vast open space that was once Kaduna’s Murtala Square disappears completely, some space should be reserved to erect a Kufena stone statue of John Davidson Rockefeller, founder of Standard Oil Corporation, a man once described by The Economist magazine as “the most successful capitalist of all time.” The Kaduna State Government’s single minded push to attract local and foreign investment and encourage a spirit of enterprise is accompanied by a severe social policy of demolishing land encroachments, throwing out beggars and the destitute, repeated verification of payrolls, dethroning of hundreds of traditional rulers and threat to throw out 20,000 school teachers. This miserly posture found personification in John D. Every year, the world’s first billionaire went out on a street and gave one dime to a poor child. He then urged the child to invest the money wisely in order to become a millionaire.

In a video that went viral last year, Governor Abiola Ajimobi reminded protesting students of a state-owned university that he is the “constituted authority” in Oyo State. In order to immortalise that landmark event, I urge Agodi Government House to erect in its premises a wrought iron statue of Adolf Hitler, the ultimate constituted authority. Adolf Hitler’s fuehrer prinzip, or leadership principle, was that “only the leader [Der Fuhrer] knows the goal and purpose of state” so he must be obeyed unquestioningly. How about that, Oga Ajimobi?

I am just wondering. The big bosses in Aso Rock have greeted many questions from Nigerians recently with studied silence. They include the Kachikwu-Baru feud, numerous other rifts in the corridors of power, the probe report on Babachir and Oke, non-constitution of many boards, cabinet reshuffle rumours, whether or not the president is interested in a second term, the nature of the illness that took the president away for many months this year, and why the ruling APC is dying. Since silence is Aso Rock’s top principle, it should erect at the gate a Kwali clay statue of 30th US President Calvin C. Coolidge, who was known to his countrymen as Silent Cal.

For Jacob Zuma, it is a long overdue farewell.