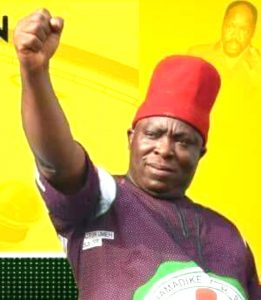 Nelson Mandela, the African hero of the twentieth century, taught us that strong convictions are the secret of surviving deprivation.

And we begin to get a sense of how the All Progressives Grand Alliance and one of its star brands, Victor Umeh, finally achieved a breakthrough in the knotty senatorial turf.
In the most clinical fashion of a long distance champion, Senator Victor Chukwunonyelum Umeh breasted the Senate tape on Saturday, January 13, 2008, bringing to an end a cocktail of contrived confusion that stood in the way of implementing the Court of Appeal judgment of December 7, 2015. Thus, the successful conduct of the re-run election and the subsequent swearing-in of Ohamadike have immense significance for Nigeria’s democracy.

However, a critical study of the APGA story will reveal that it is the most brutalized but not the most humiliated political party of the fourth republic. Its very registration as a political party was a tug of war. It had taken a Supreme Court judgment in 2002 to force the withheld official recognition.
Posterity will credit the collective of APGA faithful for steadfastness in the face of many aggressions. But if individuals are to be recognized for standing up to the assaults, the honour goes first to Senator Victor Umeh. From 2004 to 2014, no single individual impacted on the fortunes of the All Progressives Grand Alliance as Senator Victor Umeh.

The story of Anambra’s journey of transformation is in part, the story of APGA’s travails and triumphs.  APGA launched the movement that ushered in Anambra’s process of recovery from neglect and misrule in 2006.  Events took a critical turn in 2004, when the party was subverted from within, from the highest rung of its leadership. This came in the sudden declaration that APGA was no longer interested in the prosecution of its 2003 Anambra governorship petition, then going on at the tribunal. The severity of the internal conspiracy compelled a more deliberate search for a new leadership that could be ‘predicted’ and trusted. And it was in this delicate circumstance that Senator Umeh, hitherto national treasurer of the party, came to the fore as acting national chairman in 2004.

Ignoring the issues of his indictment, the suspended national chairman, Chekwas Okorie, pronounced that he could not be removed because his name was written in the party’s constitution. The disengagement generated eleven suits, nearly all instituted by the sanctioned politician. With reality dawning, Okorie returned the APGA certificate in his possession but sought revenge with his bid to register a new party, United Peoples Grand Alliance (UPGA).

The spoiler game was clear enough. The phonetic and syntactic similarities between APGA and UPGA were sure to have devastating consequences for APGA in a society still contending with low literacy levels. An alert APGA leadership swung into action, detailing grounds which ought to render Okorie’s application defective. INEC under Attahiru Jega, a man widely respected for his pedigree, sustained the objections for their merit. Okorie settled for the name, United Progressive Party in the end.

There were more rivers and deserts to cross. About a year to the end of his tenure in 2014, a former governor was seized by his own pet idea of playing adventures with APGA. Members of APGA were at a loss as the ex governor tried to install a new national chairman in place of the man reckoned as an achiever, whose tenure had not ended. Umeh stood his ground and snatched victory from the lion’s jaw. Consequently, he was able to influence the nomination of Willie Obiano as the APGA governorship candidate in the 2013 election and also driving the re – election of Governor Obiano for second term.

We now see why the outcome of the January 13, 2018 senatorial poll is so significant for APGA. If Umeh, the veteran of APGA battles, cannot make it to the Senate, what hope lies for others? With the prospect of free and fair elections brightening under Buhari’s presidency, the quest to launch APGA to the centre stage of Nigeria’s government and politics has become feasible with the congruent leadership of Umeh and Governor Willie Obiano.  With APGA’s flag flying at the Senate, notice is served to those ever in a hurry to define our political colouration as a two party system not to beat the gun.

In 2019, the PDP will, for the first time, contest national elections without being in control in Abuja. That level playing ground guarantees that other political parties can no longer appropriate APGA’s victories as happened in the governorship cases of Ugochukwu Agballa, Enugu State, in 2003; Martin Agbaso, Imo State, 2007; and Alex Otti, Abia State 2015.  APGA now has its first senator from Anambra State; A senator who will not defect to another party!

The Union by Victor Oladejo.

The Bird by Oladejo Victor.