Home Blog The Tallaght robbery mirrors the London riots in a curious manner. 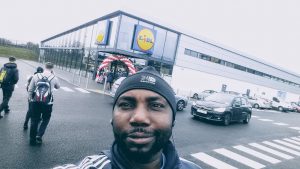 At a time when many responsible citizens were either curled under the duvet or outdoors making snowballs, snowmen, and igloos, a bunch of never do wells found it auspicious to make the news by capitalizing on the vacant streets.

The gang of hoodlums decided to carry out a bizarre daylight robbery at a local branch of grocery giant Lidl in the fast-growing town of Tallaght, Ireland. There is a viral footage of a mechanical digger being used to smash the rooftop of the building.

Reports had it that the looters, some of whom have been rounded up are aged between 20–47 mostly stole booze and tobacco after failing to break open the store safe.
What goes on in their minds? Was this pre-planned or a spur of the moment heist prompted by the chilling snowstorm?

I recall a similar incident during the London riots of 2011. We had traveled from different places, some came from Nigeria while many came in from the US and other parts of Europe to attend a friend’s wedding in London. With the wedding over some of us who stayed behind to spend a few days often met at my friend’s home, a cozy flat at the Bush Hill Park end of Enfield Town in North London. 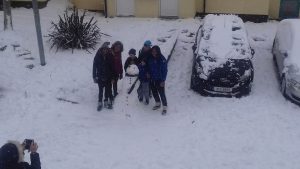 As usual, we had assembled there on the day. In between the usual drinks and banter, we turned our attention to the television to catch up with the news update on the ongoing riots across London.

The previous two days had been chaotic as a supposedly harmless march to protest the killing of a man by the police in Tottenham, eventually turned into violence that spread across London like wildfire. Shops were looted and properties destroyed.

As we watched, the TV screen was crammed with scenes of loud siren blaring police cars speeding past Turkish shops dotted around Wood Green mall. From the news, we learned that Wood Green and Enfield which witnessed disturbances the previous day were now calmer.

We continued our banter and when the clock ticked closer towards midnight it was time to start leaving. The thought of the 45-minute drive back to Romford where I had rented a short-stay flat didn’t in any way make me look forward to leaving. But I had to, I had left my mum and the kids for too long and besides my wife who was with me had been nudging me since to look at the time.

I sluggishly got up to leave and remembered that I had to drop off my friend at Premier Inn Enfield Lock before embarking on the long drive. That didn’t add to my worry as the hotel was nearby but it didn’t brighten my face either. After the last laughs and goodnights we left and in a few minutes, we had reached the hotel. He said he needed a long rest into the next day as he will be going back to Nigeria the day after that.

We waved goodnight and I started making my way out of the hotel, that was when we saw them! As I was about to leave the hotel entrance way into the street I was jolted by what I saw. A group of young men numbering about 10–15 walked across the entrance way, almost inches from the front bumper of my car.

My wife froze. I froze too and in that moment of panic almost engaged the reverse gear. I noticed they were all putting on hooded tops and had their faces masked in bandanas. Some were riding bicycles and others had clubs and metal rods.

It was a big relief as they walked carelessly past us. I told my wife that these were some of the kids causing havoc for the last couple of days, I could tell they were mostly teenagers from their dressing and slim build. As they fizzled into the darker end of the street they made a left turn into the road behind the hotel. We drove off and I quickly called my friend and told him to inform the hotel security.

We hadn’t made it to the north circular road (A406), when my phone rang, it was my friend. He said those boys had lighted up the building behind the hotel.

He was in a panic, and as he told me to come back and get him I could hear the crackling fire sounds and loud voices behind.

I told him that I’ll be right there.

I turned and started heading back to the hotel. I called the remaining guys at the house we just left and they said they heard and have started making their way to the hotel too.

By the time we got there the main routes to the area had been sealed off by police and firemen. Many cars were already parked behind the yellow hazard tapes. We quickly brainstormed and decided that two guys should walk through to go and fetch him.

As they left and made their way towards the towering inferno I glanced around and noticed people were gathered in small groups. They were discussing the incident. From the chit-chat, I learned that the building was a large Sony warehouse which served as a distribution hub PIAS, a music distribution company. Some of the kids were seen carting away electronics and video games like Sony PlayStation and the rest of them. It reminded me of scenes of the infamous Los Angeles riots where people smashed store windows only to jump and loot trainers. Some were pictured trying out sizes!

I never really did figure it out, and here I am seven years later writing about it in the aftermath of another madness in Tallaght. I recollect that in reporting the riots back then the mainstream media had painted a picture of an inevitable uprising by the underclass. Beyond the fury which united rival gangs that was directed at a corrupt section of the police Tottenham was an angrier lash out against obvious inequalities by a societal class whose means struggle to cope with the flagrant consumerism forced down on them by the system.

Of course, the politician may disagree but then the Friday night robbery in Tallaght once again brings me to the same fundamental question. Why would a 47-year-old break into a Lidl store which will definitely have a shatterproof safe only to risk jail time by scooping tobacco and booze? The answer to this question will lead to a cloudy orb of resentment, frustration, and exasperation with the system, and except there is a pathway to real and enduring solutions then the reoccurrence of similar incidents should never be ruled out.

Again the critical question, what really goes on in their minds?