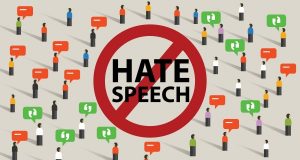 The journalist hangouts across the nation have been buzzing with Dapchi and the Bill Gates stories, but this Guardian editorial takes a look at another important current affair that is somewhat under reports. Read…

A careless declaration in Kano the other day by the Information and Culture Minister that a nebulous concept called “hate speech” would henceforth be treated as “terrorism’ in Nigeria had hardly been absorbed by concerned citizens when a bill that prescribes death sentence for a hate speech that leads to death.

It is curious too that the minister’s threat and the hate speech bill as a private member bill from the Senate emerged after Vice President Yemi Osinbajo hinted at criminalization of government’s context of hate speech.
So, there is but one mind in all these executive and legislative state actors, all bent against free speech, which defines the essence of democracy.

In other words, democracy loses its majesty when its beneficiaries and those who should defend it are the ones sponsoring nebulous legislation to demonise democracy in the land.
This bill sponsored by Senator Aliyu Sabi, Niger State and the executive support that heralded its arrival are to say the least hateful, careless, suspicious, obnoxious and undemocratic.
Federal government has been harping on the conceptual confusion called “hate speech” and it has been finding ways of criminalizing it without seeking a national consensus on it.

The federal government, which casually declared “hate speech” as an act of terrorism and warned that it would, henceforth, prosecute those who indulged in the practice as terrorism suspect should note that the most significant dividend of democracy is not physical infrastructure such as good roads: it is an intrinsic and golden thing called “free speech”, endorsed by Section 39 (1) of the 1999 Constitution as amended.

And so any legislation or policy, which seeks to restrict or constrict is a violation of the organic law of the land that should be avoided. Section 39 (1) of the Constitution provides: “Every person shall be entitled to freedom of expression, including freedom to hold opinions and to receive and impart ideas and information without interference”.

The Minister of Information and Culture, Alhaji Lai Mohammed had at a recent Nigeria Union of Journalists (NUJ) event in Kano State announced that henceforth, offenders of dangerous comments would be treated in accordance with the 2011 Terrorism Act.
The minister who spoke at the second National Conference of the Nigeria Union of Journalists (NUJ) in Kano noted that government’s directive through the National Broadcasting Commission (NBC) to sanction any broadcast stations that allowed their organs to be used as media for promotion of hate speeches should not be discounted.

Even the minister’s reference to a directive to a regulator, the NBC that should be seen to be independent, to sanction stations, is dangerous and unacceptable. NBC should not be perceived as a government tool to curtail press freedom in a democratic society.

It is also hoped that government is aware that it was for that reason that a Court of Appeal ruled during the Second Republic (1970-1983) that Sedition Law, a colonial legacy, should not be allowed to operate in a democratic society and was so abrogated by the Court presided over by Justice Olajide Olatawura, (JCA).

It was said in that related landmark ruling that has jurisprudential significance for democracy that leaders should be tolerant of democratic opinions and those (leaders) “who cannot stand the heat” of (strong opinions) “should leave the kitchen” of democracy.

According to Nigeria’s Information Minister in Kano, the federal government has continued to promote ethical standard and the core responsibility of the journalism as a profession, but an attempt to circumvent its rightful position in the society could be inimical to the national cohesion.
He said the media as a purveyor of public views has a huge responsibility of preserving national unity, public values and peaceful co-existence.

“As a gatekeeper, the media is expected in high hope to build responsible and lead vibrant societal development devoid of dangerous and hate speeches.

The federal government will continue to promote and uphold ethical standard”, Minister Mohammed had noted in a manner of teaching journalism ethics and law.

State actors who are afraid of the media should note clearly that the world has gone beyond this pedantic approach to governance and teaching social responsibility of the media to its practitioners.
By the way, the role of the media is not a donation by any government. It is expressly provided in the Constitution in Section 22 as The Fourth Estate of the Realm. And a minister has no added role of defining and regulating it as there are regulatory frameworks for media practice.

Nevertheless, some citizens have frowned on the groundswell of political and religious opinions that can undermine cohesion and security of the nation.

And more and more prominent citizens are expressing strong views against irresponsible journalism, especially in the social media where most citizens appear to have sought refuge to vent their frustration and anger about averageness, docility, unfairness, promotion of inequality and lack of tangible and measurable progress in the country.

But in the main, seeking to criminalise speech making because it is unfavorable as “hate speech’ in a democracy can destroy the majesty of that democracy, which is defined even in a global context by the quality of free speech therein.

In other words, when people are no longer free to speak their minds in a democracy, there will be a strong perception that, that democracy is in trouble. So, state actors who seek to discuss “hate speech” should not demonise democracy by seeking to pollute the finesse that enhances its majesty through unnecessary policy and regulation.

The conclusion of the whole matter is that constructive engagement or seeking justice in the courts of law is the fulcrum on which order and progress rest in a democracy, not through criminalisation of journalism or pollution of free speech, its most remarkable dividend.

Even as we sound some warning note to the authorities about the danger of attempting to tamper with press freedom at this time, it is still pertinent to add that discussion points being interpreted as ‘hate speeches’ are matters arising from: deprecatory protests against marginalisation, the corporate existence of Nigeria, inequity, social injustice, ethnical and religious intolerance, unhindered ravages of Fulani herdsmen, complacency about restructuring of the federation or even the outright mediocrity in statecraft.

Besides, the war on corruption itself has been largely seen as one-sided as members of the ruling party, government officials and members of the “Kitchen Cabinet” are being shielded from the strong arms of the law.

In the main, there should be circumspection in the way government of the day should be talking of using a 2011 Terrorism Act and 2013 Amendment Act to prosecute what they are interpreting as “hate speeches” from the media, lest they scourge democracy and its majesty in Nigeria, the hope and tower of strength for the black people in the world.

No doubt, there are weightier matters of governance within the context of welfare and security of the citizens, easily the primary purpose of government, which should be on priority list at the moment.
And so limiting “free speech” that the constitution guarantees with a hateful legislation should not be one of such consistencies the people would like to see at the moment.

Lest we forget, fighting corruption, Nigeria’s number one enemy should be one of the pre-occupations we would like to see as citizens, not insufferable and curious collaboration between the executive and legislature in the name of getting a hateful legislation to limit the most valuable dividend of democracy: “free speech”.