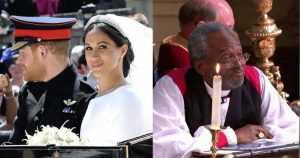 The royal wedding reaffirmed the enduring power of spectacle, myth, and symbolism in shaping consciousness, perceptions, and attitudes on a mass scale. ~ Chris Ngwodo

Yesterday our screens were dominated or should I say inundated with the flamboyance of an Empire that is largely responsible for most of the conflicts that continue plaguing our world today.

An Empire that broke away from the Catholic Church and confiscated its properties because of ego, greed, and avarice.

An Empire with a dark and blood soiled history of slave trade and colonisation.

An Empire that amalgamated two different cultures and called it Nigeria, but wants a divorce from its European brothers.

An Empire created the largest open prison in history with the phrase “non-Jewish communities” in the infamous Balfour declaration to exclude the Arabs who constituted about 90% of the population in Palestine.

An Empire that has deployed the Apartheid rule and other heinous mechanisms to brutally exterminate any opposition to its expansionist land grab and dominance in America, Australia, China, Cyprus, India, Ireland, South Africa and Yemen to mention just a few.

The 58 Palestinians killed by Israeli snipers will soon be forgotten, their fate ironically but harshly buried in the nauseous opulence of the same ignoble Empire that created their problem in the first place. What a wicked world!

And to date, its citizens are proud of these catalogue of atrocities not because they are all bad people but because the ruling elites have cleverly ensured that the abridged history of the Empire taught in schools can only make its subjects go “Wow, God bless the Queen!”.

I remember how we gathered to watch the Royal Wedding of 1981 in my house back then. The fascinated looks on our faces remain vivid. What did we know then? Like the average Brit, we had only been taught the skewed version of the exploits and magnanimity of the Great British Empire in Social Studies, so it was always going to be an awesome experience to watch the glamorous ceremony that represents its tradition.

Thirty-seven years later and here we are again. Another media frenzy, another effusive adulation of idle fox hunting monarchs who enjoy an unfair and humongous slice of the people’s wealth by virtue heritage. But this time I did not watch, I couldn’t be bothered. You will be surprised at the things I won’t be caught wasting time on. I rather had a lovely and well-deserved siesta as I slept late the previous night, and only got up to watch the F.A Cup final.

But my Missus watched though, she was downstairs all day and was still glued to the screen long after the live event as Sky news repeatedly played the clip. She knows my opinion of the cultural relics that have arrogated so much power to themselves over the years so she only called my attention to the follow-up analysis of the preacher’s somewhat controversial sermon.

Yes! That’s my man. My MVP on the day. He was the typical Episcopal preacher. Soulful, passionate, eloquent and highly animated. He also brought along the usual African American baggage and perhaps even some excess.

The theme of his address, LOVE, was most fitting for the occasion. And boy did he nail it? Swaying and gesticulating from left to right he preached to the congregation but appeared focused on the couple. He barely noticed the other people in the room including a few gobsmacked royals as he referenced the traditional African American spiritual “There is a balm in Gilead” to drive home his point.

For me, that was the high point of the entire ceremony. It was gratifying to know that someone had the balls to make them shifty, and he was black too.

And when I tweeted the first paragraph of this reverie a loving friend who is probably the most caring person I know replied, “Just watch and be happy. The couple is not at fault”.

Of course, I’m happy for them. They are two lovebirds, their deep love for each other is very obvious. Who wouldn’t be happy for two youngsters from totally different backgrounds starting a union with the world standing in awe and a new life ahead of them? Moreover both appear to be the non-conformists among the so-called Royals and there’s faint enthusiasm that they may bring that to bear in a positive manner.

Never mind fellow conspiracy theorists that postulate an arranged marriage. The Empire plans well ahead of time they say, that is why it keeps reinventing itself. Brexit had long been envisaged and what better way to cajole the puppets of the old colonies than to follow up an elaborate Commonwealth Games with welcoming a black Duchess into Buckingham Palace?

We shall see. But for now, let me remain a hopeful progressive. Let me savour the remarkable union and the attendant representation of diversity in today’s multicultural world. Let me be gratified that on a day for the so-called Royals two black pearls stole the show by glowing brightly in a Royal plague.

Abaribe metaphorically told the North to wake up.

We thought you may like our weekly book recommendations listed HERE. .