Home Blog A requiem for the remnants of the old brigade. 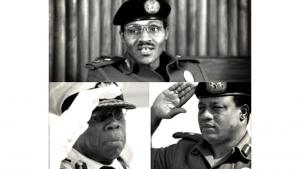 A prince or general who knows exactly how to organise his war according to his object and means, who does neither too little nor too much, gives by that the greatest proof of his genius. But the effects of this talent are exhibited not so much by the invention of new modes of action, which might strike the eye immediately, as in the successful final result of the whole. It is the exact fulfilment of silent suppositions, it is the noiseless harmony of the whole action which we should admire, and which only makes itself known in the total result.~ Carl von Clausewitz

If we are to go with the saying that “politics is war by other means” then it would be fair to say that the Prussian General who theorised the above quote in his book On War III could have had a vision of President Muhammadu Buhari. The 19th-century military theorist renowned for his intellectual texts on the political and psychological aspects of war succinctly captured Buhari’s approach since he took charge. This strategy could ultimately determine the result of the war of attrition between him and the retired generals as we approach the 2019 presidential elections.

A keen observer of Nigerian politics will agree that our politics is not yet organic, especially at the national level. Dating back to the second republic the leadership choices available to the hoi polloi have often been decided by political power blocs controlled by the military class. They determine most of the elected and appointed political office holders that gather in Abuja to superintend over the affairs of the nation.

In their thinking and should I say justification, they have this mephistophelean dogma that having fought and shed blood for the country they have earned the epaulettes to maintain a perpetual stranglehold on our collective patrimony. They want to dictate who gets what, when and how much. Former presidents Obasanjo and Babangida have publicly echoed this severally. And to achieve this they had long cornered a huge chunk of the nation’s resources for themselves and their cronies especially in the sleazy and opaque oil sector of our mono-product economy.

When TY Danjuma arrogantly informed an impoverished nation of his dilemma on how to spend the $500 million profit raked in from the sale of one oil block, I wondered if Bill Gates, then the world’s richest man had any single business entity he could sell at such an incredulous markup. Alongside Danjuma and the prominent ex-heads of state, there are others like General Aliyu Gusau, the unassuming but dangerous veteran of military intelligence who was indicted for corruption by the Rafindadi led NSO in 1985 before he was let off the hook after Buhari’s government was toppled.

These men are stupendously rich, powerful and ruthless. They have a concentric modus operandi and there is almost always a fallback option. There is hardly a worthy boardroom in the corporate sector without their bagmen and they ensure that whoever sits on the throne will often do their bidding.

They are responsible for many great and ignoble deeds. Look around you and almost every major infrastructure built across the country is traceable to them. From the airports to the refineries, the power stations, Abuja and the third mainland bridge in Lagos. They have killed friends, soldiers and civilians, truncated our democratic progress many times and looted the nation blind. A friend succinctly described them as the “Godless men who do not fear any God”, and together they form the nucleus of the ‘Nigerian Establishment’.

However, Buhari who is also a member of the so-called ‘class of 66’ and equally a former Head Of State had been persistently knocking on the door of Aso Rock since 2003. Not as an outsider so to say but as an insider with a somewhat different ideology. He is not known for the wealth and affluence of the rest, and this made him a darling of the poor masses especially in the northern region that is riddled with ubiquitous poverty.

He was rebuffed and his efforts thwarted thrice by this Obasanjo until he was forced to make some compromise in an effervescent alliance with Bola Tinubu. Then aided by former President Jonathan’s naivety, the North’s determination to take back power and the sheer momentum of the APC coalition the generals were lobbied into lending support, albeit reluctantly for their colleague to realise his long-standing ambition.

Today, after almost four years in power Buhari is back in the trenches in a portentous battle to retain power against the wishes of the same mates who supported him in 2015.

At face value, the outcome of the clash will appear to be a no-brainer. President Buhari will receive the Tyson treatment, knocked out before the end of round one by the group of disgruntled generals led by the indefatigable rabble-rouser himself former President Obasanjo. All they need do is to approve and a crisis that will bring Buhari to his knees will erupt. And make no mistake about it these men have the resources to destabilise Africa let alone Nigeria.

However, this kind of battle is rarely fought in a linear manner. There are other asymmetries to be considered and of particular interest would be the loyalty of the security forces who wield enormous powers during elections. The partisan forces are also in the reckoning. They form a large section of the foot soldiers that disseminate truths, half-truths and fallacies to influence the masses who will troop to the polls. And lastly the leverage of western powers. Together this combination often determines the outcome of an election in my country.

Nevertheless, these generals are not particularly concerned about national development, I mean they have contributed their bit and are mostly octogenarians now. They are more concerned about their vested interest and this perhaps explains why they threw their weight behind Atiku Abubakar who best represents an agglomeration of those interests. Having had direct and indirect dealings in the business of ripping off the nation with him over the years they simply couldn’t trust Tambuwal more. So they drafted Aliyu Gusau to teach Wike a political lesson in his home turf.

Paradoxically in uniting behind Atiku, the generals shot themselves in the foot. The former Vice President is a bad product considering the trail of excess baggage around him which Obasanjo severally trumpeted to the world over the past decade. This much the Ebora Owu must have realised with the recent attempt to invalidate Atiku’s congressional indictment in the US. Even with Obasanjo’s international clout, there are things you simply can’t manipulate in a functional democracy where perception is critical. So try as they may, the campaign slogans, jingles and sound bites of the PDP cannot and will not cleanse the odorous stigma of corruption firmly imprinted on our consciousness.

Such a candidate cannot defeat Buhari. The generals know this. They have little electoral relevance with the grassroots. What’s more, they are up against a fellow general, the fact that he may not have stolen does not preclude an awareness of the mechanism and dynamics of power politics. Buhari is a product of the system, an American trained strategist, a former everything you can think of and currently the commander in chief. With the millions of Talakawas willing to march at the command of his raised fist the old Czars know they have been outfoxed, boxed into a tight corner where they have little option but to negotiate from that disadvantaged position. Any other untoward contemplation will be risking a date with the Hague.

As I wrote in a previous article there are over 40 oil licenses due to expire this year and the President holds the knife and the yam. That is the real meat of the matter. When the minister of state for petroleum resources Ibe Kachikwu recently stated that the federal government had already raised about $2 billion from early renewals because of the need to finance the budget it was a clear indication that Buhari is unwilling to take chances.

Nevertheless, it is expected that the president will be pragmatic. The leaders of western nations whose interests are equally at stake here will see to this. While the political tittle-tattle goes on in the media, it is often at the table of negotiations hosted by foreign powers that the significant decisions on African leadership are made.

They will remind Buhari that nobody is bigger than the nation. And no matter how inchoate in thought he may be about it he will be persuaded to adjust his position on some contentious areas for progress to be made. But most importantly, the President will be warned that he runs the risk of being wrongly judged by posterity if urgent measures are not deployed to tackle the surfeit of manifest blunders of omission and commission of his administration.

So as we continue with the final lap of the campaigns, expect to see more of the devious subterfuge and political chicanery come to the fore as each camp attempts to gain some advantage. You can be sure that the current chartbuster on the CJN will be followed by others. They are part of the intrigues that make up the cruel duel for power in Africa.

Buhari’s likely victory may not resolve the conflict of the Nigerian state. But long after he would have left the stage, Nigerians will look back and appreciate his tenure as one which despite the difficulties, proclaimed the requiem for the remnants of the old brigade including Buhari himself. They will remember it as the watershed in our history that galvanised vibrant and visionary young leaders like Ezekwesili, Sowore, Moghalu and Durotoye to courageously challenge the status quo. So by and large, February 2019 could herald a new dawn in our democratic journey. For we can only begin genuine transformation when we replace a ruling class dependent on state patronage with a new set of productive leaders solely determined by the proletariat.