Home Blog Buhari in Aba: The crux of the matter 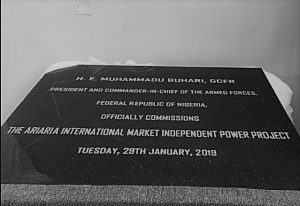 ‘‘As a government, we issued a presidential mandate to the Ministry of Power, Works and Housing and the Rural Electrification Agency to energise the market. In June 2018, the Nigerian Electricity Regulatory Commission granted an electricity generation licence as well as a distribution licence for the market. This will enable the generation and distribution of 9.5 Megawatts of electricity within the market. The project is moving smoothly and I have been assured the market will be fully electrified soon. We are working closely with the State Government, Local Government, Traditional Rulers, Market Associations and the community on this project to ensure this goal is actualised by the end of the year,’’ ~ President Muhammadu Buhari

President Buhari made the above statement while reassuring his good friend Eze Ikonne of his resolve to fulfil his 2015 campaign promise to Abia people during the royal father’s visit to the seat of power on September 2018.

I grew up in Aba. I can tell you for certain that Enyimba is a great city populated by fearless men and women. You don’t need to delve too far into history to read about some of our exploits including the momentous Aba women riot of 1929. The people of Enyimba city make no pretences. They take life and business seriously and thus over time have come to symbolise both the Igbo entrepreneurial prowess and their cohesive spirit in resistance during times of oppression.

Aba has one of the largest markets in West Africa. As a teenager growing in the city I was conversant with many other markets in the South East region. If I wanted a pair of Giorgio Brutini shoes I will go to Onitsha Main Market but if I needed a good made in Nigeria leather sandals then Ariaria was the perfect place to get that. So again I can tell you for free that in terms of trading Ariaria could match other markets in the country but none could rival it when it comes to production. And production is largely dependent on energy supply.

So it wasn’t surprising that Aba suffered during the locust years when our infrastructure was left to rot away. The once bubbling manufacturing sector became torpid just like many other production hubs across the land. Years of neglect left a town which once boasted of major industries and multinationals like PZ, Lever Brothers, UAC and UTC on its knees. Aba became a shadow of its old self. Enyimba could no longer march on. Rather it became notorious for crime. Kidnappings happened by the hour and many relocated, leaving the economy of the city in tatters.

President Buhari is in Aba as I write. The visit is part of his campaign trail for another election but he also commissioned that Independent Powe Plant in Ariaria. Eze Ikonne will be on hand to receive him. The royal father will be over the moon. Its a promise fulfiled. I can imagine his smirky look at the sight of those who labelled him a traitor when he conferred the title of ‘Ogbuagu’ on candidate Buhari back in 2015. I’m sure many of them will struggle to get a handshake today. Ikonne has laughed last.

But that is by the way. Many of Eze Ikonne’s subjects would begin to understand why their King had been romancing this ‘Igbo hating leader’ as they had been taught to believe. They will realise that Buhari is a man who values loyalty. A man who keeps his own end of the bargain. We saw them troop out en masse to welcome him. They were excited. Elated at the prospect of an improved power supply, increased productivity and prosperity.

IPOB had attempted to put their usual spanner in the works with a proclamation of ‘sit at home’. But that didn’t stop them. Shouts of ‘Sai Buhari’ rented the air. Many on social media held their breath. In Aba, they wondered? Aba of all places.

Agents of the lousy opposition and enemies of progress also sought to diminish the feat by proffering various claims. Some said it was a state government initiative. Who granted the license? Others said its a private initiative. Who cares? So long as Ariaria people will benefit.

Now, do you still believe Abia will give Buhari 13,000 votes like in 2015? You may now begin to understand why he repeatedly says that he is satisfied with the response of the real voters. They are the ones that understand that he is not the problem but rather the painful solution. They are the poor who have been and will always be among us just like Christ said in the Bible. They are the ones that wake up by 5 am. Attend the morning mass, get the family ready for the day and hop on a bus or keke to work. It is a daily grind, their grocery shopping is done at dusk and not weekly. If that family of four, five or six will feed on the day then there is no room for dulling whenever the cock crows. They couldn’t care less about a jurist with millions of dollars in his foreign accounts. All they want is the provision of basic amenities that will facilitate their daily hustle.

It may also interest my people to note that on Eze Ikonne’s visit to the Villa, President Buhari had also intimated him that during his trip to China he had wooed the executives of one of the largest cotton and garment companies in the world to establish operations in Aba. This he said he was doing in conjunction with the state government.

I have many Abia friends, some are aides to Governor Ikpeazu. Most are united and vocal in their opposition to the president. They just hate the man. Ask why and you are likely to get “I just don’t like him” as a response. No reason whatsoever to loathe a man who is bringing back the kind of infrastructure last seen during the days of the late Sam Mbakwe to their state. If only they can channel this energy towards having the Chinese textile mill located in Abia state, I know as well as they do that the popular Kent market in Aba will benefit immensely.

It was the legendary Mahatma Gandhi’s who said that; “leadership at one time meant muscles, but today it means getting along with people”. If the South East region didn’t benefit infrastructurally when we had access to power via a ‘surrogate’ son who appointed many of ‘our own’ into lofty positions, shouldn’t Gandhi’s postulation appeal to our leaders now that an ‘enemy’ is providing some infrastructure?

So while you vociferously argue against the ‘suspension’ of Walter Onnoghen. While you share pictures of your placard carrying colleagues and their ‘endangered’ democracy. As you fume over the ‘Islamisation’ agenda of the present government. Spare a little time to ponder on Buhari’s nepotism in appointing the first Igbo US Ambassador – A feat unaccomplished during the ‘golden years’ of Jonathan even with the persistent lobbying by the late Ojo Mmaduekwe. Most importantly please allow the ordinary traders and artisans of Ariaria to savour their new NEPA. It may be a tiny drop in the ocean but it is their dividend of democracy. Their own national cake. 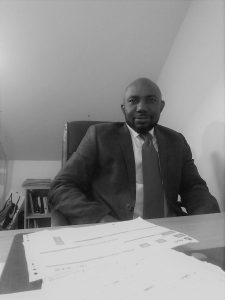