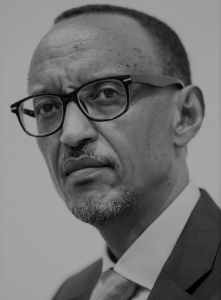 “Africa should not just wait to be exploited or influenced. No. We should be part of the conversation. We should raise ourselves to a level where there are certain terms we dictate in the conversation because we have a lot to offer” ~Paul Kagame

Undoubtedly Rwanda has come to be a unique nation. The tiny East African country with a population of just over 11 million people is not unique because of the 1994 genocide but because it has somehow managed to rise from that horrific bloodletting to become one of Africa’s fastest-growing economies and a global model of economic development. All thanks to the purposeful and visionary leadership of one man; Paul Kagame.

But as the world remembers the genocide we should not lose sight of the fact that the man who is at the helm has been in office for almost two decades. As a matter of fact, it is about a quarter of a century because while serving as the Vice President he was widely regarded as the de facto president by many during the six years that preceded his ascension to the throne. But that is not all, let us ponder some of the similarities between the Rwandan leader and other African leaders we would like to see their backs.

A protege of Museveni, Kagame was a military leader before transforming into the civilian president of his country. And perhaps with the exception of Cameroon’s Paul Biya most of Africa’s ‘sit tight’ leaders like Idris Deby (Chad), Mbasogo (E.Guinea) and Nguesso(Congo) to name just a few equally have a military background. They are usually men of means who are no stranger to violence, mutinies and coups which are synonymous with power in Africa.

He is tied to the apron of the western powers. For example, In 2017 he was given a big stage in Washington DC during the World Bank/IMF Annual Meeting where he sat cross-legged beside World Bank President Jim Yong Kim while he was showered with encomiums as the democratic leader who is transforming Rwanda from the ruins of genocide to a tourism paradise. Well, unfortunately, this is also the case with many long-ruling African leaders, they remain a darling of the west until they dare to untie themselves or their nations from those apron strings.

The Rwandan President is intolerant. He has a record of suppressing any form of dissent. His administration has been characterised by a chronology of disappearances, politically motivated arrests, unlawful incarceration and murders, especially of perceived government opponents including journalists.

The two female presidential aspirants who dared to form a movement with the semblance of opposition were severely dealt with. Victoire Ingabire was convicted for ‘inciting insurrection’ and served eight of a fifteen-year jail term before she was granted a presidential pardon just last year while 38-year-old accountant turned politician Diane Rwigara was detained and subsequently acquitted on similar trumped-up charges. Many see their ‘real’ crime as daring to contest for Kagame’s seat in 2010 and 2017 respectively.

After winning a second term in office, Kagame who had earlier ruled out staying beyond the constitutional two-term limit was alleged to have surreptitiously engineered a referendum which necessitated a constitutional amendment and after some nimble political footwork in 2015, the nation’s parliament passed a law reducing the original two 7-year term limit to two 5-year terms.

But here is the real sauce of the gist; Not only was Kagame allowed to contest for a third 7- year term, he was also granted a preposterous exception to seek two further 5-year terms if he so wishes thereby creating the possibility of him remaining in power till 2034!

Again, this is also an age long strategy that was successfully deployed by dictators like Mugabe, Museveni and Nkurunziza. However, it must be said that while the aforementioned leaders subverted democracy at the cost of violence and protests in which lives were lost, there was not much contestation in Rwanda where the petition that devised the potentiality of Kagame becoming a ‘life president’ was reportedly opposed by only 10 people.

Indeed Kagame is the most popular person in Rwanda. He always won elections by no less than 90% of the votes and in 2017 he won by 99%. One is therefore left to query the manner of people that queue behind one person. Is Kagame the wisest, smartest, brightest person in Rwanda? Isn’t there any other capable of leading Rwanda? How is it that the intelligentsia has largely remained mute while one man continues to ride roughshod over 11 million people? And if democracy thrives on vibrant opposition can Rwanda really be described as one?

The trick is often to have a rubber stamp parliament, a largely owned state media and most importantly a privileged military that is willing to back the king so long as their bread remains buttered. Once these are achieved the task of whipping the masses in line through ‘fear or favour’ becomes a no brainer and legitimacy can easily be bought on the global stage by photo ops with western leaders who fete African tyrants for economic gains.

Whereas it will take only a blind person to dispute the achievements of Paul Kagame for his people it will equally require same to ignore the concreteness of the allegations of abuses and impunity. His stewardship must be examined within its full context to arrive at a fair verdict.

So as global tributes pour in for Kwibuka @ 25 the man who has as many enemies as he has friends, especially in a conflict-ridden region where he spent considerable time on the other side will also need some personal reflections. It will do the former rebel a lot of good to begin the search for a successor. Extending his reign beyond the current third term may be legal but it is still a gamble given that five years is a very long time in politics. And in a milieu where western influence is being whittled across Africa leaders like Mugabe, Jammeh, Bouteflika and lately Bashir have been swept away by the same crowd which once sang their praise.

If Rwanda and Africa are to dictate certain terms in global conversations like Kagame wishes then her leaders must unlearn to dictate on term limits and start respecting the constitution. African leaders should not be scared of alternatives as power truly belongs to the people who must be allowed to express the right of choice. The opportunity for the Tambwe born liberator to be ‘unAfrican’ and forever etch his name in the golden pages of Rwandan history beckons in 2024, but will he? We shall see.