Home Blog Our Social Media Space And The Need For Reorientation. 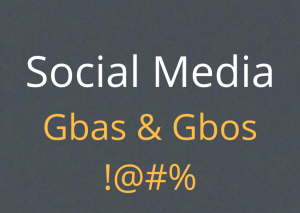 “If you are on social media, and you are not learning, not laughing, not being inspired or not networking, then you are using it wrong.”~Germany Kent

Funke Akindele’s recent experience is not one of a kind. World over the bar of moral conduct is often set higher for public figures and celebrities who are perceived as role models. And when they fall short the public queue up to give them a brain resetting smackdown. I did not make them role models. Neither did you. But by cheering almost all their actions we collectively and perhaps even unconsciously goad the big corporations and public institutions to make them brand ambassadors. Some, like Funke and Ali Baba are very well deserved while some, not so much.

Of course, Madam Jenifa will be alright, I mean she isn’t the controversial type as much as I know and what’s more, her adroitness should surmount this smudge on a hard-earned career. However, her story brings me to the impact of social media on our societal values as a nation, an issue that I have been mulling over for some time and which we shall explore.

The euphoria that embraced the emergence of new media and technologies as an information superhighway that will bring new hope and dignity has all but vanished. And the potential of shaping the political agenda via social media as elicited by the Arab spring only a decade ago now appears to a mirage in the distant past.

All have been replaced by incomprehensible elisions, mob mentality and offensive comments.

Take for instance the vile wishes that have been directed at our leaders since some tested positive to COVID 19. Somebody tweeted that Nigerian politicians deserve to be infected with the coronavirus. When I asked why, he narrated how he lost his best friend to bad governance, poor hospitals and bad roads. I empathised with him but quickly reminded him that our politicians didn’t drop from Mars. They emerged from and were voted in by the Nigerian masses.

Many of us are connected to politicians either as relatives or friends, so if they are infected we could eventually be infected. Moreover, Americans are also dying because of poor healthcare. Should their politicians — whom we often eulogise — be infected too?

Another eyesore is the way our youths have bolstered their confidence in cyberbegging. On Facebook, Twitter and Instagram we have real and spoof accounts littering every celebrity comment with account details. Some have even devised the emotional blackmail of adding suicide notes. It is incredible how low some will go for a pittance from strangers.

We can agree on hard times but a look at the Ghanaian social media space with whom we share similar unemployment and poverty indices tells a different story.

Furthermore, there is an unhealthy mob mentality which I harped on in a previous essay. Some of those who led the persecution of Adedayo and Onigbinde when they were appointed into government positions have been exposed as praise-singing hypocrites who criticised previous administrations. One begins to wonder if these appointments are meant to serve the people or the ruling party? After all, Dr Chikwe who is doing a fantastic job at the NCDC was reportedly appointed by the president after he criticised the health sector.

The Nigerian social media space can be toxic and it would seem that we possess a precocious fervour to spontaneously spit venom more than to applaud or commend. Whatsmore these sudden paroxysms extend beyond public figures to each other for holding divergent opinions. Notice that by “we” I have not exempted myself. Indeed I was one of the many Twitter users on Funke’s TL demanding an apology. And even though I didn’t disparage her, I still managed to sprinkle those who attempted to defend her action with invectives.

Yet these predilections are not peculiar to us, for even in our often adored ‘saner climes’ like the US and UK, while ubiquitous in their use, online platforms are nevertheless populated by similar narratives with public personalities and ordinary citizens alike savaged on a daily basis. My days are incomplete without rummaging through Trump’s Twitter timeline for the funny but sometimes noxious vitriols between his supporters and critics.

However, I discovered a stark difference. For instance, some Americans who oppose Trump claim that he is destroying the country’s values by encouraging racial discrimination while his fans say that he is restoring the Christian values that made America great.

The common denominator here is “values”. As Nigerians what can we rightly term as our values, one is often forced to ponder? I mean it may just be a good place to start.

Unlike our ‘saner clime’ contemporaries, there is rarely a consensus on what Nigerians consider worthy national/societal values. Of course, some argue that being an amalgamation of different tribes our values will differ. But having co-existed for over a century surely there has to be one common value we cherish. Ok, we have an anthem. It is a song but how many of our celebrities and public officials can sing the national anthem? I will leave that to your imagination.

Many of us cannot sing the national anthem but we are ever ready to trash our nation. And often because a so-called ‘influencer’ or someone we admire did. I have repeatedly said that the most poignant emblem of the social media era is the paucity of critical thinking. A lot of half-truths fly across our screens. Mostly conjectures and innuendos of paid rookie spin doctors, yet many willingly broadcast the same by adding the silly tag ‘forwarded as received’ without a care in the world to do a basic google fact check.

Frankly, I get worried when respected individuals applaud the Chadian military over a 2015 story in a bid to mock our troops who risk their lives to keep us safe. It is appalling to see supposedly educated people commend a fugitive Imam for insulting Nigeria as a nation of terrorists. And it is embarrassing for a reputable public servant to share fake pictures of COVID-19 relief materials to promote countries other than Nigeria.

Our leaders themselves aren’t any better. The current government did not only emerge on the back of propaganda but has equally devoted more resources to churning out sound bites through official sources and bum steers via social media hirelings. Else why would an APC-led NASS question the disbursement of the Social Investment Programme (SIP) funds? It shouldn’t be so if adequate information is accessible to the populace. Here in Ireland, everybody can access just about any information on governance by visiting one website but as I write the website of the National Orientation Agency (NOA) is down.

Maybe if Senator Musa and his colleagues had researched further a bill for reorientation would have taken priority over the ‘Protection from Internet Falsehood and Manipulations Bill’ which appears to have been rejected by a majority of our social media users. I know it is easy to dismiss them as the inconsequential vocal minority but the issue goes beyond our usual fault-lines exploited by politicians for self benefits. It is a marker for a behavioural pattern which will shape our future as a nation. It will be more productive in the longterm to educate the masses on our common values than trying to gag people from spreading misinformation in an ever-evolving digital age.

Already studies suggest that a projected 36.8 million Nigerians could be using social media by 2023. A time like this when many people have plenty of time for reflection presents an opportunity for agencies like the NOA to embark on a social media campaign. To map out trends and nourish the people with not just messages on COVID-19 awareness but also with well-articulated ideological, philosophical and cultural texts around these trends.

We need to start inculcating a positive attitude towards our nation. If you start today, who knows, you may be in a position of authority tomorrow and this virtue will definitely be brought to bear in the office you occupy and by extension to those you lead.

And yes, yes I know. The ready question cynics and pessimists usually ask is what is there to be optimistic about in Nigeria? I will tell you just about one of many. Are you aware that in our much-admired Rwanda you are 17% more likely to be incarcerated than in Nigeria? Surely, freedom is something we all cherish.

Now while we continue to demand better governance from our leaders let us do our part. Use that data to learn the national anthem and sing it with pride as Jung Tae-Se did during the 2010 world cup. That is a characteristic of a patriotic citizen and great nations can only be built by patriots.