In Nigeria today, no other issue puts in jeopardy the corporate existence of the nation as security challenges, which seems to be on an upward trajectory as the days go by. There are daily reports of brutal attacks, concerted kidnapping, heartless maiming of innocent citizens, indiscriminate burning of houses and vehicles, destruction of business enterprises and disruption of peaceful social and community life by one group of disgruntled citizens or the other.

Ironically, abiding to the Federal Character principle enshrined in Nigeria’s constitution, every region has been plagued with their individual security challenges, which has been a source of grave concern among citizens because their fundamental rights to life and dignity hangs in the balance.

For years now, some parts of the North has been under the siege of the insurgent group popularly called Boko haram, which eclipsed ISIS for the morbid title of world most deadly terrorist group in 2014 [1], the same year they kidnapped the 276 Chibok girls. Although, their brazenly open reign of terror has been contained to an extent, they still episodically launch some deadly attacks which has led to the death of gallant soldiers and civilians. They recently laid ambush and attacked the convoy of Borno state Governor, who escaped by a whisker.

Currently, armed banditry, herdsmen attacks, cattle rustling and of course kidnappings along the Abuja-Kaduna Express has been the major security concern in the region. Not forgetting to mention the ongoing battle in Southern Kaduna. The level of insecurity in the region is so alarming and even the President’s home state (Kastina) has been under the siege of armed bandits.

Coming down South, the story is not any different. Kidnapping and armed robbery has become more pervasive. Kidnapper’s targets now cut across even low income families. The highways, especially the Lokoja-Okene Express are hotspots for robbery and kidnapping. Cultism is still a menace, the latest that made national headline was the one million boys who terrorized Lagosians during the COVID-19 lockdown. Not forgetting to mention the inter-communal clashes that has been happening in the South East. All these alongside other sundry crimes has resulted in Nigeria ranking 148th out of the 163 countries in the 2019 Global Peace Index. [2]

THE CAUSE OF INSECURITY:

A lot of measures have been put in place to bolster security like creating the Joint Task Force, movement of military command center to Maiduguri, periodic dismissal and appointment of new security chiefs and appropriating vast sums of money to tame security challenges, yet these challenges keeps surging and appears or at least have remained insurmountable. This is because the causative factors are yet to be resolved.

The causes of insecurity in the country include but are not limited to;

To an outsider, these threats are overshadowed by an illusion of stability when compared to the explosive situations in Syria and Yemen, but it has caused severe consequences across different sectors of the economy, as well as loss of lives and properties and it has the potential to throw the country into turmoil. Hence, overcoming this surge of security challenges is paramount and it relies on collective effort from all parties involved.

To begin with, the government as the captain of the ship must put its house in order. All elected and appointed officials should be patriotic and humane enough to realize that their fellow countrymen are dying or at the risk of dying if they do not honestly participate in the war against insecurity. The major and starting point to commence this war is for the government to govern in a way that fosters development. Development in this context consists of creating an economy with relevant social, economic and physical infrastructure for business operations and industrial growth, to provide gainful employment, functional education and quality health care for the people. By doing this, there will be a drastic reduction in the pool of frustrated citizens who resort to crime due to lack of opportunities.

There should be a robust combination of legislative and judicial intervention towards addressing some of the acute security challenges. This entails formulation and effective implementation of policies and programs capable of addressing poverty, unemployment, corruption, injustice, porous borders and arms proliferation. Serious diplomatic missions need to be undertaken to enhance military collaboration between our neighboring countries towards combined and joint efforts to root out criminals because border towns have become hotspots for criminals and some insurgents have bases in some of these countries.

Also, there needs to be an intensification on the anti-corruption crusade. This entails enforcing stringent guidelines and checks especially on funds meant for improving security and strengthening the EFCC to serve as a watchdog over the security agencies finances.

Moving down to the security agencies, there should be a complete overhaul of the security institutions in the country to reflect international standards of best practices. There should be modernization of security agencies with training, modern-day combat machinery, intelligence sharing, advanced technology, logistics, motivation and change of orientation. The security agencies should evolve a people-centered approach. This involves engaging communities, since most criminals are drawn from these communities.  To achieve this, they must gain the respect and trust of the people. Hence, issues of police brutality and harassment should be a thing of the past.

The two major religious groups in Nigeria also have a major role to play. The teachings of religious groups are one of the bases of value development, and the role of value in security cannot be overemphasized, as it is a known fact that value governs behaviors. Hence, worship centers should not be used as an avenue for instigating members to be violent or to engage in Nation destabilizing activities. Instead, tolerance should be taught alongside their spiritual messages, which I suppose should be against killing, stealing and covetousness.

Ethnic group leaders should also be promoters of peace by encouraging their subjects to live in peace with people of other ethnicity. They should be charged with the responsibility of mobilizing necessary manpower and assistance to aid security agencies in fighting insecurity. Religious and ethnic group leaders must not shy away from speaking out against crime either due to fear or favor.

Business enterprises can contribute towards the enhancement of security in the country through long term strategy of creating and providing jobs especially for the unemployed youth, not exploiting their host communities and donating equipment to the security agencies nearest to them.

Lastly, private individuals need to cultivate the habit of security consciousness and to immediately report any suspicious situation to the appropriate authority. Every individual must evince a high level of security awareness and alertness because we understand our communities better.

While a vision of absolute security may seem like a utopia, each gentle stride will move us towards the desired destination. Succinctly put by H.E. Luccock: “No one can whistle a symphony, it takes a whole orchestra to play it”. Hence all stakeholders have a role to play towards tackling insecurity and to bring serenity to Nigeria, which will not only just result in an economic boom, but also the preservation of the sanctity of lives.

Izebe Evbogame, a final year Dental Student at the University of Benin and a social commentator wrote in via evbogame1@gmail.com 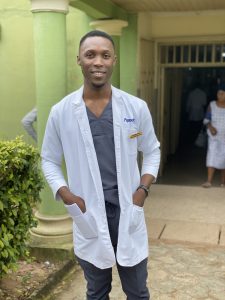