No one really wants to die. No one really has the courage to intentionally look at death in the face and welcome it with open hands. No one. Suicide is simply the death of a man’s mind, conscience, instinct and heart so that one is living but already dead. Yet this last stage before death never comes till man fully loses hope in life. Suicide denies one of hope. In support of this statement, Lucius Annaeus Seneca once said, “Sometimes, even to live is an act of courage”. There is no perfect life and no life that has it all perfectly planned out. Life from its beginning is a thread of hope. Hope that a mother conceives, hope that a baby is born, hope that a baby takes its first breath, steps, says its first words and lives to introduce another life on earth. Suicide cuts such thread at its early stage, cutting away a generation yet unborn and hope unfulfilled. Suicide is permanent end to a temporary problem. Its thought paints a picture that ending one’s life would end the problems but unfortunately never let’s the victim find out the truth.

Strangely, suicidal thoughts can go on over months before the actual perpetration. Months that if one had opened up to someone, might not have led to suicide. The thoughts puts the world against one, the problems like unmovable mountains and the shame as irrevocable. While this may be justifiable to the victim, its repercussions has a ripple effect on the society.

According to The World Health Organization (WHO), about 1 million people die due to suicide every year, 79% of them occuring in Low and Middle Income Countries (due to the poor standard of living and harsh life) and most victims ranging between age 15-29 years. These numbers keep increasing as the years go by because suicide births suicide. An example is a young man who is unemployed and tired of life hearing about another commiting suicide and begins to think in that direction. This is a sad but true fact as the younger generation begin to see nothing wrong with throwing the towel quickly once life seems hard. It would then not be a wonder as life expectancy decreases as the years go by.

A quote by Ken Norton says that suicide is like a pebble in a pond. The waves ripple outward and their reach is much greater than the size of the pebble. Suicide does nothing but kills both the victim and everyone associated with the victim. The victim dies once but those left behind die a thousand times as they wonder what went wrong and what they did or did not do. Members of the deceased, who the deceased was probably trying to help by commiting suicide, are traumatized for life reliving the last moments. They are forever changed and the society at large is affected.

This grievous act against life never takes into consideration the stigma attached to the family. Families have been branded and avoided simply because a member took his own life. Like other taboos in our culture, many families believe that what one member can do, every member can do also. This also applies to suicide as people detest associating or even marrying from families a suicide took place. The victim not only succeeded in traumatizing the family but also stigmatizing the family. A double blow.

There is also no benefit of this act to the victim. The victim only ends a life that would have been better off if he or she waited a little longer, talked to someone or treated depression. Suicidal thoughts give victims the lie that taking life would end the pains or troubles but only toss one to another world of uncertainty. A world one still has no control over and can not determine the outcome. No one knows what is after death but at the point of this act, the victims are blinded by ravaging thoughts not true.

With the inception of World Suicide Prevention Day held on 10th of September every year, the World Health Organization strives to educate the public especially the vulnerable age of the ripple effects of suicide, the possible causes of suicide which are depression and alcohol use disorders and its impact to the world. Access to means for committing suicide are being limited daily such as guns are bought only with permit, drugs bought only with prescriptions and chemicals not readily available to the public. Families are advised to look out for one another and encourage therapy to members that are depressed or addicted to alcohol. Educators spread the word that nothing good comes out of suicide. It is never an option and never a solution. 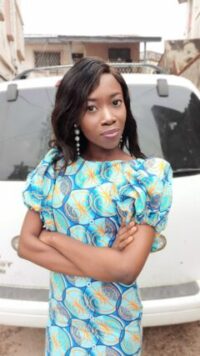 A Day At Wildlife Sanctuary by Oluwaseun Osanyinro.