Ladies and gentlemen, the trio of Victor Oladejo, Roselyn Sho-Olajide, and Chukwuemeka Oluka have won the N60,000 cash price for week 37. 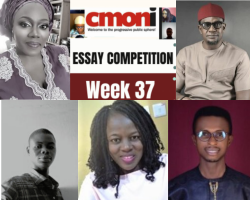 Undercover by Victor Oladejo: I am very happy for Victor because he has been our most consistent participant. This young man is a born thriller writer who deploys almost every aspect of the art in his writings. Told in scenes Undercover is a tale of the brave Juliet who defied the odds to expose the secrets of a member of the underworld. You will believe that a romantic drama is unfolding at first but as the curtain draws on scene one the reader is abruptly hurled into a violent dark world filled with intrigues and bloodletting. Victor’s captivating delivery is infused with suspense, witty dialogue, and dark humour all through as the story winds to an explosive crescendo. Yet another masterful delivery. Congrats Victor and please serve us more like this.

The Ex-Convict by Roselyn Sho-Olajide: Roselyn has been a class act since joining the competition. She has written and won in both genres. It takes some expertise to achieve that. She has also been consistent and is often the first to submit her entry. You can tell she means business as a writer. The Ex-Convict is also a story with twists. The reader is thrust into the main incident almost immediately but as you read along you begin to get the feeling that this is a “love gone wrong” kind of tale until you are suddenly swept off your feet in the anti-climax. This technique takes quite some doing. Well done Roselyn.

A Critical Interrogation Of Buhari’s Education Summit Pledge by Chukwuemeka Oluka:
In this essay, Chukwuemeka who has since stuck to this genre crossed all the ts dotted all the is. When you do that your work will rank among the top contenders. The introduction immediately followed by a review of factors around the topic left the reader in no doubt that this is a natural research writer. The work also presented arguments and backed same up with illustrations before reaching a detailed conclusion with valid suggestions. The bibliography is excellent and other writers will do well to emulate this. Good job Chukwuemeka.

Baring some typo and grammatical errors the other essays were equally good. Writers will do well to always edit their work repeatedly before submission. Here are some general observations from a judge.

1. Some writers are still not cross-checking their work thereby giving the impression that they have issues with grammar whereas it could have been oversight. Some previous writers who I considered very good didn’t fare well with syntax, grammar, and general flow.

2. Again, the mixing of past and present tenses is still an issue. Someone tells a story in the past tense and the one sentence in that paragraph suddenly changes to present tense. This gets the reader perplexed. There are instances where that could be acceptable but there are skills used in this that it isn’t even noticed.

3. Some are using centre arrangements for their paragraphs. They need to use ‘justify.’ Probably it is because they did their work in a hurry.

4. The research essays were good but I only noticed one person attempt originality. Most of the people that did the research essay all sounded the same giving me the impression that they just took words from a news site and then touched with synonyms of words they found. The duplicity was noticeable with exception of one. One person did not even quote sources in his assertions. He gave figures but did not indicate where he was getting the figures from. Research writers must endeavour to show a degree of originality else the work done is zero if your work is similar to a previous essay.

6. Creative writers must do more with descriptions. The core of fiction writing is in evocation and the best way to do this is by employing the popular maxim “show don’t tell”. This is usually achieved by being descriptive. And please try and spice up your work with a bit of dialogue here and there because it gives your characters life!

7. If the observed mistakes are related to the lengthier word count then writers are advised to start early. That’s is why we gave two weeks.

Thanks for participating and remember that the purpose of our journey is not necessarily to win but to become better writers because we are all winners here. Special thanks to our judges who did exceptionally well given the same time frame for more volumes. God bless!