Home Blog Reviewing The CBN’s Position On The Spraying Of Naira Notes by Abdulrazaq...

Rising skywards, a batch ripple into several pieces, and as it reached its highest, the wind directed its cause downwards, unto the waiting arms of desperate seekers, jumping, pillaging, and fighting themselves for who will be the first to pick from the falling naira notes.

This is a descriptive example of what happens during social functions in Nigeria.
One of the consequences of our boisterous love for parties and social events in this part of the world is the flagrant display and spraying of money which is used to achieve many ends; some as a show of wealth, to rejoice with the celebrants, to seal prayers or a way through which the organizers could recoup whatever financial resources they must have expended in making the party a success. If anything is sure, spraying money at parties and events has become a cultural thing, and it has been unconsciously ingrained in us all.

A logical question comes up, and it asks simply, “what more could be to spraying money at parties? After all, it is a Nigerian thing to do, and no one is complaining.” Yes, it is a Nigerian thing to do, but there is one complaining, and it is not just anyone. The Central Bank of Nigeria has never failed to express its displeasure at the way the currency is used at social functions. It has become a recurring issue that almost all the past CBN governors have had to issue a policy on it. But several years down the line, with sanctions, nothing has changed.

The CBN stance is two-ended: one, the Naira is a national symbol. A national symbol is a form of identity that distinguishes a country from another. Further, it represents a collectiveness of the people’s visions, goals and history. In Nigeria’s context, the adoption of the Naira in 1973 symbolized our severance from foreign control or subjugation. It is based on this reasoning that the CBN had advocated for more respectful use of the Naira. If the currency is being sprayed and marched on, it is argued by the CBN that such use could further depreciate its value.

Two, the CBN stated the high cost of printing the Naira and how spraying the Naira at parties could lead to mutilation of the notes, easy introduction of fake Naira notes and how the CBN could be forced to print more to replace the damaged and fake notes. This reason necessitated plans to introduce the 5000 Naira note, which the CBN felt would have helped solve some of these problems. The CBN’s reasons are both economic and political. Given these reasons, the next question is what is the legal backing for sanctions to arise. After all, nulla poena sine lege, one can’t be punished for something that is not prohibited by law.

As provided for in Section 21 of the CBN Act 2007, spraying Naira notes at social occasions or any other place is an offence punishable by six-month imprisonment or a fine of N50,000 or both for anyone found guilty. The existence of this provision of the law means spraying of Naira notes is an act that could lead to prosecution at a court of law. However, enforcing the law has not come easy since it has had to contend with Nigerians’ culture of spraying money at social events. Further, this provision, from the beginning, had been a toothless dog, which had only barked and barked with viciousness and had no victims. Despite the prevalence of this act of spraying of Naira notes at social functions, there has been no evidence of any arrest or prosecution made.

In its defence, the CBN had stated that as they weren’t an enforcement institution, they couldn’t carry out arrests or prosecution. Going further, the CBN indicated that the enforcement of the law is a duty on the police and the Economic and Financial Crimes Commission (EFCC). There are concerns, however, of who these laws and sanctions will apply to. Is it another case of a law that spares the rich and influential and goes after the poor? And these concerns are not far-fetched.

The burial ceremony of the mother of the Cubana Group’s boss brought these issues to the fore again. The burial ceremony was marked by wanton spraying of Naira notes, in manners never seen before. And advocates for the full implementation of the law that criminalizes spraying Naira notes were up kicking again. But this time, the agitation wasn’t only if there could be an implementation of the law, but whether it was possible at all. Given the social status of Obi Cubana, the burial attracted high profile persons too. In attendance were several security operatives including, Abba Kyari, a well-known Deputy Commissioner of Police and leader of the Inspector-General of Police’s Intelligence Response Team, who claimed that he had attended the burial to honour a good friend. Like every other time, every act done in contravention to the law which prohibits spraying naira notes went unnoticed by the security agents.

Likewise, several other high-profile political persons have been found guilty. In the same year, the bill was signed into law, the then president Olusegun Obasanjo was caught spraying money at a social event. At the wedding of President Muhammadu Buhari’s daughter, the same thing occurred and not just anywhere but at the presidential villa. It is without doubt also that the CBN governor himself must have been present at this function. Former Kogi Senator, Dino Melaye, has also been guilty of this after he was recorded spraying Naira notes on a singer, Yinka Ayefele, at his mother’s burial in 2019.

In coming up with an opinion, this writer sought guidance in other countries, outside of Africa, where there are laws proscribing openly spraying the national currency at social events. The search didn’t yield any result as this writer realized that this socio-cultural practice is peculiar to the African continent. Due to its deep permeation into every core of Nigerian society, it has become a norm, which explains why the presence of a law has not been enough to end the practice.

Cultural practices direct what is considered lawful and unlawful. In most instances, for laws to gain full acceptance, they must echo cultural practices, which reflect the people’s wishes. Laws that fail to meet this requirement are often left redundant and nonfunctional. An example is a law that criminalizes bigamy, a core aspect of the Nigerian cultural society. Not only has this law being left redundant, but its very existence has also been questioned. The same can be said about the law criminalizing spraying of Naira notes at social functions, and it explains the low level of implementation. Even the president who signed it into law was seen violating the same law the year it was signed into law.

The mere fact that spraying of Naira notes is a cultural thing doesn’t rubbish the CBN’s concerns or reasons for seeking the law’s full implementation. In the long run, the economic costs of printing new notes fall on the ordinary taxpayer. The consequence is that money that the government would have otherwise spent on other things like infrastructure will be allocated for this purpose. On the political side of it, it is true that defacement of the currency is a form of ridicule on the nation. For the most part, it slowly takes away the pride and confidence associated with the currency.
However, all is not lost. While it might be too late and illogical to have police officers barging into social events and arresting people, the technological advancements in the financial world could offer some recourse. With the rapid shift to digital currencies, which have no physical form, the problem of the Naira being sprayed at parties and the high cost of replacing defaced currency notes could be gradually solved. The CBN recently announced its intention to create a Central Bank Digital Currency (CBDC) called ‘eNaira’, which will serve as a digital representation of the Naira. While it is not without its problems, it could go a long in solving some of these issues associated with the spraying of money at social events.
In conclusion, the law that criminalizes the spraying of Naira touches both the upper and lower class. Surprisingly too, its implementation has not been focused on the lower class alone. Even at the upper echelon, the disregard for the law has been made public, even at events to which the CBN governor, who ought to be the custodian of this law, must have attended. In further emphasizing the effect a widespread use of digital currencies could have in solving these issues, this writer understands and appreciates the technological gap that exists in the country and still contends that if the CBN moves with the willingness to boost the use of digital currencies, then some change could be achieved. Spraying money at functions isn’t a century-old practice, and thus, like how it was introduced into functions, it could be slowly removed a step at a time. 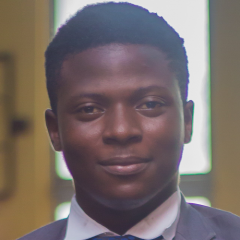