“… Jezzy D, the self-acclaimed Prince of Music has been declared missing. He was last seen on the 12th of this month at a party with other celebrities on the island. You would recall that he just had a diamond worth 10 million dollars surgically placed in his chest. He streamed the process live to his millions of followers on his social media handle. Most people are insinuating that he was kidnapped because of it. However, investigation is still being carried on by the police. Now, Sports news …”

“The rate at which insecurity is increasing in the country these days is alarming,” Diana said as she turned off the television, “it has been two days now and he hasn’t been found. Hmmm, no one is really safe in this country again.”

“I don’t know if I should sympathize with him, or not,” Richard responded.

“You see dear, showing off one’s means of life isn’t really necessary. This, sometimes, is detrimental to oneself as it draws undue attention from wicked people towards oneself.”

“I don’t really agree with you, honey. These people are celebrities and one marketing strategy is to show off their material riches so that they can be trending on social media and be on the lips of netizens. Whether one shows off his wealth or not isn’t an excuse for someone else to kidnap him as a result,” Diana answered.

“Well, I think his disappearance is now trending. Isn’t that what he wanted?”

“How can you make a joke out of someone’s predicament. At least the kidnappers should have named their price at this moment.”

“I think you’re right, my fear is just that those who kidnapped him might not really be looking for ransom, instead they might be interested in the diamond in his chest, and if they try pulling it out without an experienced surgeon, the result might be fatal,” he answered.

Richard had learnt not to argue with his wife for long especially when she seems to be having the upper hand in the argument. She was a bit temperamental and at one occasion had flung a flower vase towards his direction just because he had a different opinion on a matter.

“I should be on my way to work now, dear,” Diana said. She picked up her bag, gave her husband a warm hug and dashed out.

Richard watched her leave. The smell of her perfume filled the entire room. He smiled as her car drove off.

He counted himself lucky to have her as his wife. Despite her anger issues, she was still the love of his life.

He remembered how they had met while in the university. He was in his third year while she was a fresher. He saw her looking dejected under the mango tree when he approached her. She didn’t know where to go in order to complete her admission.

Richard was awestruck at her beauty. Fair skinned, pointed nosed and a diastema. Her voice was so soft that it could melt a hardened heart. He was completely swept off his feet.

The smile that escaped her lips was something he would never forget.

So began the relationship that finally lead to their marriage when she was done with her compulsory youth service.

She got to the office early and sat on her cozy chair. On her desk were a few files that needed to be attended to. Her eyes gazed for a few minutes at her wedding picture placed besides the flower pot on her table.

Her eyes beamed as she recounted how she and Richard had surmounted all odds in order to be together. Her dad had not been in support of the relationship, because in his words “he is not from our tribe.”

But love prevailed. Diana had been able to convince her dad to accept Richard. She knew about her anger issues and it was only Richard who really understood her and had been trying to help her overcome it.

Richard has graduated as the best student in his department, and had gone to become one of the most sought after surgeon in the country.

However, everything came to an end when his license was revoked which meant that he could no longer practice medicine.

It was a surgery gone wrong which had led to the death of the patient, the only surviving son of a former minister. Richard had claimed that it was a mistake from the hospital head and he was only being punished as the scapegoat. To him, it was more of giving a dog a bad name and then hanging it.

Even though things became a bit harder, Richard always looked ahead with optimism. It was during that time that Diana got her job at the firm, and Richard started working from home as a freelance writer on health issues, making use of some freelancing sites.

“Mrs. Tega, I’ll be needing the files for the foreign project in two hours. I need to make some adjustments to the document before it is forwarded to them.”

That was Linda, the firm’s secretary. She was a hardworking lady. Her dexterity was second to none. She was indeed an asset to the firm.

“Oh no, I think I left it at home. I had taken it home to complete some tasks on it. It seemed I forgot to put it in my bag when I was done. I’ll need to rush home to bring it.”

“It’s okay. But make sure you’re here on time. The manager isn’t in the office, he had gone for a business meeting so you’re free to run home to get it.”

Diana wondered why she had forgotten to put the document in her bag. She wasn’t someone forget things. She felt that something must have made her forget.

“Oh, I said it,” her fingers snapped as she remembered what had happened.

Since the past two days, her food in the kitchen had been dwindling at an alarming rate. She knew that Richard wasn’t a heavy eater, in fact he eats like a bird. But all of a sudden, he claimed to have grown the appetite of a horse.

When Diana had gotten home the night before, she quickly went to the study room to complete the task on the document. She then hurried to the kitchen to get something to eat before arranging the documents back in her bag since she was famished.

On getting to the kitchen, she noticed that all the food in the pot was gone.

“Dear, there’s nothing left in the pot,” she had said to Richard.

“Yeah, sorry not to have called you earlier about it. I would have asked you to stop at the market to get things for dinner,” Richard had responded.

“But the food I left was enough to feed four people, there’s no way you could have consumed all that. I know you and I know how much you eat.”

“I guess your darling hubby has changed. Now, I can eat a mountain of food,” Richard had replied, smiling. “I’m sorry I didn’t call to inform you, okay.”

There was nothing she could do. She had to drive out to the night market close by in order to get things to prepare another soup.

She prayed not to encounter the dreaded city traffic on her way home and back to the office so as to meet with time. She had been entrusted with that file by the manager and if, because of her, the file wasn’t sent, he would definitely not be happy with her.

She drove in, headed towards the dining but stopped on her tracks. There were bloodstains on the edge of the wall.

Blood? Could it be that of a chicken? Did Richard kill a chicken for lunch? No, that’s not possible, he detested live chicken but instead preferred frozen ones. What then could this be?

“Honey, I’m home,” she called out, but there was no response.

“Where has he gone to?” she thought.

He wasn’t in the bedroom too. She noticed that the bed had been moved a bit. She tried pushing it back in place when she noticed a small opening by the wall – a secret door.

She was shocked. So, there had been a secret passage here and she had not been aware. Well, maybe he put it there during construction in case of an emergency, but still he should have informed her.

She was going to take it up with him when he finally returns for not informing her about it all this while. She had to quickly return to the office with the document before it became late. However, her curiosity got the better of her. She wanted to find out where the door led to, so she went in.

It was a hollow passage that spiralled downwards. The stairs and walls were dusty but well illuminated by the electrical bulbs fixed there. Her heart stopped when she got to the base of the stairs. She couldn’t believe what she saw.

“What are you doing here?” a voice shouted from behind her. It was Richard.

Here she was, beneath her house, standing between her husband behind her and the lifeless body of Jezzy D in front of her, with a hole in his chest. 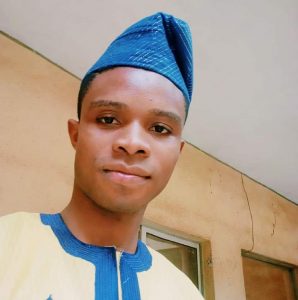 Humble Ogbonna is a diction and elocution instructor who loves writing.