I thought I knew you. I let myself believe I could trust you. When I met you, the clouds didn’t part, neither did angels sing, instead the whole world seemed to go silent because all that was in focus was you. I still remember how the sun bounced off your skin, your all too perfect teeth, I still remember how your eyes seemed to laugh as you smiled. I am a fool because even in this prison, I remember. I believed I had found the missing part of my anatomy, the bone of my bone, the flesh of my flesh, the ‘egungun’ of my ‘egungun’ as I used to jokingly call you. What’s happening to me right now is nothing but a cruel joke with me as the punchline. I try to reconcile it logically but can’t help but laughing at how ridiculous it is that I am here right now, imprisoned like an animal for doing absolutely nothing. You are evil incarnate. May your death come as slowly as time passes in this cell Ololufemi.

Sometimes I wake up, afraid, shivering in the cold because this box of concrete I call home does not make a good bed, surprise surprise. Movies and stories lie, prison is not a place where diamonds in the rough are made or found. Prison is a place where dreams and men come to die. A death sentence takes your life quickly and if you’re lucky painlessly, but prison takes what you need most (release) and gives you that which you want least(time). It kills you on the inside slowly, it makes you beg for death, more so if you know all that’s before you is a lifetime of being surrounded by walls you can never escape. It is a place of utter and absolute hopelessness. Hope is literally stolen from you, along with your innocence on the very first night. Never again do I want to feel the violating touch of another man. But I know that the sun will go down, and then they will appear outside my cell once more like they do every night, like ghosts which only hunt prey at night. I hate you Ololufemi.

At first when the policemen came, I thought it was a prank orchestrated by some jobless individuals. When I was forcefully dragged out of my apartment into a black van, I started wondering that for them to put in so much efforts, so much vigour into the prank, they must be professionals. When I was stripped down and tossed into a cell it started becoming too real for my liking. Banging on the bars and screaming myself hoarse all night did nothing to help. When morning came, I was chained to a line of ten other rough looking men and marched over to the court across the street. My name was called and the case against me was brought up. Imagine my surprise when I got to find out that I was being brought up for defilement charges. It was explained to me what that meant and I couldn’t wipe off the incredulity on my face. I curse the day life threw you into my path Ololufemi.

For four years they continued with the theatrics of taking me to court once every few months, chained every time beside a new set of hungry looking men. And every single time, the prosecution would drone on that none of their witnesses was in court and beg the indulgence of the court for an extension. For four year they did this, for four years they toyed with my life and common sense, for four years I prayed a day would come ‘my Lord’ would probe the incompetence of the prosecutor, for four years I hoped he would realize that keeping me under a holding charge without even being put on trial was a fundamental violation of whatever law the court was meant to uphold. However, every time always nothing. The judge would feign anger at the prosecution dragging their feet, sometimes I think he wasn’t even aware of the facts of the case nor could he discern which cases were different from which. For four years I held out hope thinking a day would come when this ludicrous case would be thrown out. Now they don’t even bother taking me to court, they know my trial will never come and because of the sexual nature of the offense I’ve been accused of, that I’ll never get bail. I have been given me a life sentence without even a trial!

The more time I spend in here, the less I wish to know what the outside of these walls looks like. Sometimes I gaze between the rusted bars and strain my eyes to see the fields a little beyond the double gates hunkering over all inmates like a hunch backed keeper. All I can glimpse is a large expanse of land. It’s been ten years now, I don’t want to imagine how much has changed, I don’t want to know how much I’ve changed. I don’t want a way out anymore. These walls have become my new normal. They have become home. Ololufemi, I hope any home you find will always haunt you the way mine does.

You assisted to put me in here to punish me, but when you discovered your child would grow up without a father, you became frantic in your efforts to set me free. Only then did you realize that the events your misguided bid for revenge set in motion could not be undone. I have already become part of a slow moving system attuned to taking in innocent men, and giving nothing but their old wrinkled bodies back. Worse still is that you kept it from me. For years I believed that a stroke of uncommon bad luck was what brought me to this point. Imagine my surprise when I discovered recently that my Ololufemi whom I had promised to catch a grenade for was my Judas. I have no words. I would throw that grenade at you now if I had the chance.

So here I am, trapped within the white washed walls of this abandoned place, forgotten, forever condemned to a crime I did not commit. You put me in here, for a crime I did not and could never have committed. For what it is worth, I could never stop loving you, I could condemn you from the depths of my heart, I could fantasize about ways to lovingly wring your perfect neck, but I no longer have the strength to hate you. I am tired of waiting, tired of watching time crawl slowly like a soldier ant undeterred in its march. I hate knowing that after ten years in here, the world has left me behind. I have accepted my fate, I have accepted my lot. I stopped fighting a long time ago. My maniacal laughter still echoes around my cell each time I remember that what prompted you to anonymously accuse me falsely was because you thought I was having an affair. May your relationships always end in unfortunate entanglements Ololufemi.

I will not allow my life be wasted any longer, by the time you receive this letter, I will be long gone. But not by some grand prison break scheme, neither by release by some miraculous stroke of grace. I have wasted away for too long, I have held out hope for redemption far too long, I will wait no longer. I will end it all, I will take my own life. At least this way, I will have gotten my revenge over those who put me in here. For what better revenge is there against life than death. I know you don’t want my letters, I know you want to try to move on from the horror of what you’ve done, and still I know that our warped love for each other will never let you rest. I still love you. And may that love haunt you for the rest days of your life Ololufemi. I will escape these walls, even if it has to be by a coffin. I will rest in peace in my grave. I smile as I write this because I know you will live a long life Ololufemi, yet I know you will never rest. May guilt eat you up like locust do to anything in their path Ololufemi. 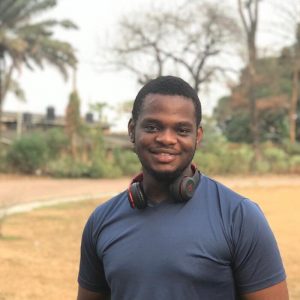 Enoch Akinlabi is an undergraduate law student of the University of Lagos. He loves stories in whatever form they come. He also loves to create worlds through his words for readers to lose themselves in for a short while.