The darkness in me today is like no other day. I’m sitting on the floor of my room and writing with a trembling hand. I’m sure that my roommate is watching me like he always does. He prefers the words “cell” and “cellmate” but I’ve refused to give in that. Referring to where I stay as a “room” gives me hope and lifts my spirit so I won’t think of the eternal damnation that awaits me.

I would have loved to make this letter a merry one and not filled with the woes of my life. I woke up to see my roommate drenched in sweat and having a high fever while murmuring in his sleep. He usually have horrible nightmares and screams that I fear his heart will soon give in. I quickly called for the guards and they came swiftly. If only they could come with the same speed whenever I scream that the rice was too soft for me to eat. Three guards came, armed with their guns and sticks as if my roommate and I were playing a trick and might hurt them.

That was the first time I wasn’t able to control his fever. Normally, I would wrap his bedsheet and pour some water out of our mere reservoir on it, and place it on his head till the fever breaks. Since my 24 years of being his roommate, I’ve been able to control this horrible mind sickness. Today was different, part of the reason I’ve been sorrowful and occupied with dark thoughts. I feel like I’ve failed him in some ways. Despite being together for years, I know very little of him as he does of me.

All I know is that he fought in the war of the Great Shepherds. He was condemned to this hideous place after he killed a fellow fighter in a scuffle. He had a wife, whose skin was so fair and her eyes glittered like the diamond. That was what Savannore claimed she looked like. Of course, I had no means of knowing whether this is true or she has a face only a mother can admire. But who am I to question a lover’s word? As nobody questioned mine whenever I talk about you to the other prisoners in the blacksmith yard. But you are beautiful, and my words are true. I’m sure you would have gotten these details about Savannore in my past letters, just that re-writing my past words to you brings light into the darkness of my heart.
The guards took Savannore to the infirmary and I was worried throughout the day. He returned some minutes before I picked up my quill to write to you. He didn’t talk, he isn’t much of a talker. He just kept staring at me like always does. I can hear footsteps approaching, I hope the guards aren’t coming to my room. It’s getting dark and I’m hurrying to finish up this letter. There’s no means of artificial lightning in this room and I would like to submit the letter at dawn so it could be delivered to you by the mail man.

Oh Tarah, my prayers haven’t been answered, a guard just called my name. I have to go now, I will write to you soon. I would really love if you could reply this letter as you haven’t been replying my other letters. I will wait patiently till I hear from you.

It’s been months since I last wrote to you. Today is one of my darkest day asides from the day I was accused of stabbing Sire Oswald Leonardo. That awful decision of mine landed me in this room, but I did it for love and I do not regret my actions. I promised myself not to write a sorrowful letter to you after my last letter but I fear I am about to break my promise.

Savannore woke up two days ago and thought it was necessary for him to speak to me. I was in a good mood, I had a good day monitoring the prisoners at the blacksmith yard. Do you still remember I told you some guards came to look for me the night of my last letter to you? Turned out that I had been promoted from a mere laborer in the blacksmith yard to a supervisor. It was done on account of my good behavior and commitment to the works in the yard. The commander of this prison said I was the right man for the job since the former supervisor had just finished his terms of 25 years imprisonment.

You have been sentenced to a life imprisonment. You are a good man and I would have loved to help you but there’s nothing I can do. I thought that making you the supervisor is a perfect way of me saying “well-done”.

Those were his exact words, Tarah. I couldn’t refuse cause of the incentives this position brought with it. I can earn enough money to buy more quill and ink to write to you and also put more money in the letter for your well-being.

After supervising the prisoners, we were sent back to our rooms as usual. I laid on my bed and I had a strong urge to write to you. I took my quill and dipped it into the fresh ink I had just purchased when Savannore stood and hit the jar with his right leg. The ink splashed on me and I stumbled onto the floor. I thought the darkness had finally possessed him. I tried to calm him but he shoved me into the wall. I didn’t want to call for the guards so it won’t land him in trouble.

He said really awful things to me and I felt the rage like I had when I was accused of killing Sire Oswald. Oswald laid his hands on you, I watched how he hit you with his callous hands. I was angry and I blacked out only to wake up with people screaming and a bloody knife on my hands with Oswald’s body laying at my feet. I didn’t kill Oswald, someone else did and I know that the killer still roams around freely. You were betrothed to me and I was already saving up so we could move to a neighboring settlement and leave a peaceful life.

Oh my, I should get back to Savannore’s story. I will write the words he uttered to me. I will try to write them like he said.
You old rotten fool! Your Tarah has never written to you back and you keep on writing! Don’t you realize you are just wasting your time? She has probably married a handsome gent and bore him a heir to continue his lineage. Why do you think she never wrote you or visit you? Your Tarah is cruel and a wicked human. At least my wife replied my first letter and stated in the most kind way that we have to part!

At that moment I realized the reasons for his stares. He thought I was a fool? Really? I felt betrayed and I hated him. Among everyone in this place, I thought he should understand better. Who could have imagined such disgusting words could come out of his mouth. I think I preferred the silent Savannore than the talking Savannore. I didn’t reply his words, I only crawled to one side of the room and silently wept. We didn’t talk and I never knew that would be our last conversation.

I received the news this afternoon that Savannore poisoned himself. The sisters in the infirmary confirmed that he had mixed caustic soda with his meal. It’s not a new thing that prisoners commit suicide here especially those serving a life imprisonment. The sisters concluded that he might have gotten the caustic soda from the kitchen where the prisoners food are being prepared. The caustic sodas are used for removing built up grease from ovens in the kitchen. He recently got transferred to the kitchen because he no longer worked well in the blacksmith yard. I told the commander of the prison that he would do well in the kitchen cause I needed more able-bodied men in the blacksmith yard.

The news of his death has brought a heartbreaking sorrow into my heart. Had I known, I wouldn’t have sent him to the kitchen. The guards should be punished for not supervising him well. For him to manage to slip a handful of caustic soda into his clothes, that showed they weren’t performing their duties well. Maybe if I hadn’t blacked out too, I would have seen him writhing in pain in our room. I was found in the in the room and rushed to the infirmary too. I got to my room later this evening and saw some caustic soda under my pillow. I don’t know how it got there but I have hurriedly retuned it before it incriminates me.

You might be wondering how I got access to the kitchen, as one of supervisors I have access to most facilities here including the kitchen. The killer of Savannore is still roaming the walls of this prison and I have vowed to bring justice to him. I have decided not to write to you anymore till I receive your letter.

I am looking forward to hearing from you while I mourn my roommate’s death. 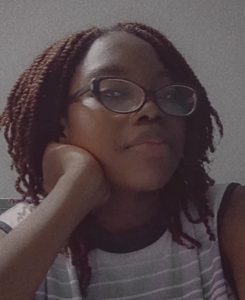 Bello Taiwo Victoria writes short stories on different genres. One of her short stories has been published in an online magazine; Writers Space Nigeria. She lives in Ibadan with her parents and siblings. Taiwo is currently a dental student at the University Of Ibadan. She is an avid reader and believes that reading literature texts of different genres is an important way to improve a writer’s writing.