“Your services are no longer required…” was a statement Ademide had grown used to hearing. This was the 5th time she had heard the same phrase in the space of two years, and each time she had always wondered what the problem could have been. Could this be the handiwork of those in her village? Or was something really wrong with her? Those were the words that went through her mind at that moment.

The last time it had happened, she had tried finding out why she was being dismissed. When she finally got to find out why, she had burst into tears and had made a decision to turn a new leaf. After staying at home for 3 months, Ademide had finally found a job with Comfort Reliance & Co. and with her new found determination, corrected the wrongs she had made at her former places of employment, yet, those same words still found her right where she had thought she found a safe haven. This was why she had decided not to take it while lying down this time, without figuring out what else could have gone wrong.

Ademide, although an only child, had grown up to be a decent girl from the Adeyimika family, and was recognized to be a smart young lady in her prime. During her senior secondary school days at the All Saints Model College, she had been elected as the Senior Prefect Girl for 2 consecutive sessions. And not only was she beautiful, she was also brilliant and loved by all. She always scaled her exams and got prizes as the best student for English, Mathematics, Government, Economics and Literature. The same had happened with her WAEC and NECO results in which she got an A grade on all her subjects.

However, she had a dysfunctionality with speaking. She was a stutterer, and this made her a short-fused person. Coupled with the fact that she was also a little impatient, she couldn’t hold any conversations for a long period. The last time she had had a full blown reaction was when she was in the University during a dispute she had with one of her colleagues named Wale. He was her boyfriend. It had been a catastrophe because of her condition. Yet, despite this, she had never felt lesser than others, in fact, she felt that she was unique because of it. But the current situation had warranted her to feel the need for eloquency. She had just confronted the general manager of her company and requested for an explanation as to why she was to be let off.

Joseph: Miss Ademide, your services are no longer required…

Joseph: (looks up with an astonished face but tries not to show it) Yes?

Joseph: Are you directing that question to me?

Ademide: (trying to keep calm…) Yes, Mr. Joseph. And I think I deserve an answer.

Joseph: If that be the case, meet me at the café right across the street in 15 minutes. We have some talking to do.

Ademide: That would be a much better choice. I will be waiting.

Right after the confrontation happened, Ademide became calm, and it then dawned on her that she could not hold any conversation for long. With this thought in her mind, she had a walk down memory lane, back to her university days when she had caught her boyfriend cheating on her. She had lost all sense of reasoning at that moment that she didn’t realize when she started to stammer.

Wale: Babe, I’m sorry. It really isn’t what you think it is. She had come on to me real hard and I found it difficult to resist. You know say, “Body no be firewood”, and I have been asking you to let us do this but you didn’t yield. That was what made it hard to resist. It is the handiwork of the devil.

Wale: Are you serious? (sighs with relief) Now, I won’t have to hear you stammer anymore.

Ademide: though surprised continues to walk away as she cries.

At that moment, she realized that there was nothing she could say in her defense that would actually help her out and this hurt her even more.

Back to the present…

Right from that moment, she had decided to never keep long conversations with anyone, especially when she knew that the conversation was likely going to irritate her as time goes on. This had narrowed down the kind of job she could apply for as she could only apply for an on-desk job where she wouldn’t have to do much talking, and getting this particular job had been out of a lot of difficulty, which was why she wanted to understand why she was to be let off.

Ademide packed the little bag she had brought to work that day and headed over to the café where she was to meet with Mr. Joseph. When she got there, she found him sitting at the far corner, softly sipping from a cup of coffee while looking out the window. She walked up to him after placing an order for a cup of cappuccino. Getting to the table, they waited a little while so her order could be delivered. After this, the following conversation ensued;

Joseph: Miss Ademide, firstly, I would like to thank you for a job done well so far. Working with you has been of a great pleasure.

Ademide: (still calm, replies) Thank you sir, but it is my belief you aren’t actually here to congratulate me.

Joseph: (smiling slightly…) In the real sense, I actually am.

Ademide: (surprised…) What do you mean by that?

Joseph: Well, before I go into that. I never knew you were this much of a stutterer. For how long has this been going on?

Ademide: It has been since birth, but it only surfaces whenever I get too worked up about something. (Getting a bit irritated…) Ca.. can weeee get t-t-t-t… to the r-reason whyyyy we are here?

Joseph: Alright then. As I had said earlier, I am actually here to congratulate you. If only you had been a little more patient to listen to what I had to say, I guess we wouldn’t be here and I wouldn’t even have known that you stammer. I think I can say it’s a good thing in one way.

Ademide: But what you had said was that my services are no longer required. How could that have been a good news?

Joseph: Well, I was just starting to deliver the message. Here is the complete version, (reads from a piece of paper in his hands)

Your services are no longer required at the Lagos branch as your relentless effort to move the organization forward has been acknowledged. You are hereby asked to resume duties at the headquarters in Abuja in two weeks’ time. You would be given a 30% increment in your salary, and accommodation would be covered by the organization. We look forward to seeing you soon.

Ademide: (screams with joy as she collects the letter from him…) Her hard work was finally paying off.

Joseph: Once again, I would like to say congratulations on your promotion. I hope you would make us proud.

Joseph: Come on, don’t stress yourself. I had actually called you here because of the stuttering. I knew you would be like this. Anyways, I’ll see you at the office. Till you leave, keep doing a good job.

With this, Joseph walked out smiling while Ademide had remained on her seat rejoicing. After a while, she left for home to share the good news with her parents, after which she celebrated with a few of her friends before retiring to bed for the day.

On a Monday morning, as early as 8am, Ademide walks into her office at the headquarters and sits back with relief as she reminisces on her past experiences. After a long thought, she sighs and looks up to God to say thank you. Shortly afterwards, some tasks which needed immediate attention were brought to her desk to be attended to and she begins work immediately. 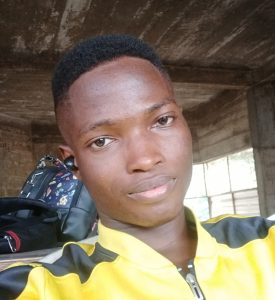 My name is Akintomide Victor, and I am a graduate of Obafemi Awolowo University. I am a graphics designer, as well as a photographer. I write short poems once in a while, but thanks to a friend of mine, I developed interest in actual writing. Now, I look forward to be a better writer.