A dead body. Buried in the woods. Covered up by dry leaves and twigs. The smell of fresh morning dew mixed with dust filled the air. Under a mahogany tree, in the dense forest of Ogere, lies the remains of a murdered lover. A betrayer. She loved money and the sight of it. In whatever form it comes, she would do anything to get it. He shouldn’t have killed her but he had to fulfill a benefactor’s wish. She died from just a blow of his axe. That axe had felled trees with one strike. That axe had been the source of his livelihood. It was given by the only god he worshipped, his benefactor. As long as it gave him the reward he enjoyed, that axe was his most treasured tool, and his benefactor, his only deity.

Shirt unbuttoned, except the last. Eyes bloodshot, a golden brown set of teeth on a dark, blank face. Lips thick, full and puffy. Loutish, yet reserved. A local errand boy but he was family. The son of a distant cousin, a widow who had too many mouths to feed. He was docile. Everyone called him Kamoru. Walata, a relative and the older son of Alhaji, had taken care of him since his drunken father had drowned in a river. He would forever be grateful to Walata for that.

Kamoru watched as the old man was laid to rest. He watched the four brothers stand close to one another as their father was placed six feet below earth’s surface. Only Kamoru knew who the traitor was among them. The traitor was the one he received orders from and his orders were paramount to him. He was his benefactor.

Alhaji neither died in his sleep nor of old age as many had thought. He, Kamoru, suffocated the man with a pillow while he slept. He only followed the order of his benefactor. He had watched Alhaji struggle under the pillow as he tightened his grip until the old man expired. He watched his benefactor pretending to blow his nose into a handkerchief. Kamoru knew he was the culprit. Alhaji did not treat his benefactor well because he was the son of a local gin seller he had got entangled with in Lagos. Alhaji did not acknowledge him as his lawful son. Kamoru overheard Alhaji’s discussion with the lawyer about not giving his benefactor a share of his inheritance and his benefactor ordered him to silence Alhaji forever .

He ran quickly to do his senior master’s bidding because he knew he called him only for his good.

Walata handed the bowl of tuwo to the lanky lad. The whiteness of the semi-solid meal was stained by the complementary meal, gbegiri and ewedu, a picture of scattered greenery on an orangy desert of White Mountains. Kamoru sat in a corner of the spacious living room, painted in turquoise blue. The image of an aged man sitting in an armchair hung in perfect geometry on the wall. At the right corner was a vintage TV set that was more of a decoration than a functional gadget.

Oblivious of everything else around, Kamoru gobbled up the meal, licking finger after finger with that smacking sound that would annoy a pure-bred Briton. Kazeto sucked the taste out of his bogo as he listened to Walata tell the others how he had just hit the jackpot. Giving up on the offensive brisket bone, Kazeto threw the piece into Kamoru’s plate. Kamoru grabbed it quickly and dismantled it in minutes. He spat the crushed pieces on the cemented floor and showed gratitude to Kazeto with a full bow and a murmured thanks. Then he scurried back to the balcony, which served as a kitchen.

After washing the bowl, he returned to his previous position, waiting for remnants and more plates to wash. Walata gave him the remnant from his plate, the other men were not as generous. Returning to the balcony, back bent in an accustomed ritual of plate washing, he satisfied his insatiable appetite with licking each of the bowls until he saw his disheveled appearance smiling back at him.

The men were Lumberjackers; Agbegilodo, the locals would call them. Times were changing and the government was coming up with more policies on deforestation and illegal transportation of wood by the expatriates, but Kamoru knew a few thugs who helped to make business easier. Walata, the oldest, led the crew. The bungalow they inhabited was their only inheritance. Kazeto, his immediate younger brother, was in his late thirties. He was once married but his wife, Fali, left him for Suileman, the money changer, when he showed her what the dollar looked like. Sulaiman, returned to Borno after disappointing Fali, then she just disappeared. Not even her parents knew where she went. Kazeto had since lost interest in women, not that he could care for them anyway.

Kazeto was not aware of Fali’s death. He hoped someday she would return to him, repentant. Kamoru knew what happened to her. His benefactor was also Fali’s lover. The two hid their illicit relationship until Fali betrayed his benefactor and expressed her interest in the money changer. The thought of how he had axed her to pieces tormented Kamoru every night but his benefactor always gave him drugs that made him pass out easily.

“Have you washed the lorry?” Saidon asked Kamoru who looked absent-minded but appeared to be listening attentively to their conversation. In everyone’s opinion, Saidon hated Kamoru. He often picked on Kamoru for flimsy reasons but never seemed to punish him. Saidon was in his mid-thirties and unlike Biliamin, the youngest of Alhaji’s sons, he was hard-working and a go-getter. Biliamin just loved books, women and wine, but the women in his life remained only in the books. He was a daydreamer, hardly lifting a finger to help but giving the best ideas.

Biliamin raised his head from his book. Kazeto ceased rubbing his bald head while Saidon shifted uncomfortably in the couch, fixing his gaze intently on Walata as he rested his arm on the wooden frame bordering the couch. Kamoru kept sweeping the floor, carefully avoiding the canopy sheet the three other men sat on.

“Mr. Benz has not only promised us lots of money. He’s sending me to Lebanon.” Walata told his brothers proudly. Biliamin dropped his book and hugged Walata fondly. Kazeto laughed and jumped like a francophone who had just passed his baccalaureate. Saidon was quiet.

“Only you? What about us?” Saidon asked without emotions.

“I’ll get a good job in Lebanon and send money to you to open our own sawmill in the city. As long as we keep this business discreet, Mr. Benz, would keep his promise.”

“But you know what Mr. Benz wants us to do is illegal? Trees are cut down with impunity causing erosions and desertifications. Why don’t we stick to the traditional method we are used to?” Biliamin reasoned.

“English does not put food on the table.” Saidon silenced him politely. He looked at Kamoru who held a broom in his hand and listened attentively to their conversation. “Leave!” Saidon shouted at Kamoru who looked him in the eye before leaving the room.

“Mr. Benz would pay us off so we don’t have to do this business again. We will renovate this house, build a bigger one in the city. Biliamin will go to the university. Kazeto will marry a new wife in the city and you, Saidon, will take care of the business while I send money from Lebanon.” Walata tried to convince his siblings. He recollected he had not seen the house documents in a while. He would have to look for them later.

Walata’s plan seemed welcomed by his brothers but soon Kamoru got a call from his benefactor. He looked at his mobile phone, a pitiable piece tied with a rubber band to keep it in place and wished he had not picked the call. This job was the most difficult. The victim this time was innocent. He was a nice man and didn’t think ill of anyone else. His benefactor wanted him to kill Walata.

Kamoru thought of the white powder his benefactor had given him. He had begged for more but his benefactor said he had to earn it. Orgasm! That was what he felt when he first tasted cocaine. His reward for stealing the house documents from Alhaji was vodka. When he killed Fali, his benefactor heightened Kamoru’s intoxication with monkeytail, a blend of weed soaked in the local gin, ogororo. After killing Alhaji, he got a steady supply of marijuana, vodka, and some cash.

What bait would his benefactor use next? He longed for the white powder but he’d rather die than kill Walata.

Walata was transfixed at the sight before him. There laid Saidon, murdered in cold-blood in his room. Kamoru hung from a hook in the ceiling, where a fan had once been. His tongue out at a corner of his mouth. His skin purplish. The house documents laid scattered over the floor. A piece of paper with blood stains laid on a table near a wooden window that was half eaten by wood insects. The uneven handwriting showed the writer’s lack of proper education. 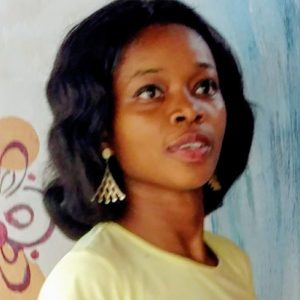