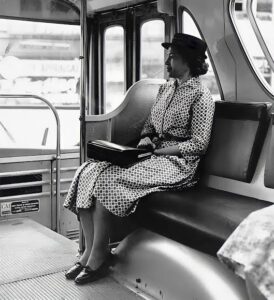 The United States Congress honoured her as “the first lady of civil rights” and “the mother of the freedom movement”.

On December 1, 1955, in Montgomery, Alabama, Parks rejected bus driver James F. Blake’s order to vacate a row of four seats in the “colored” section in favour of a White passenger, once the “White” section was filled. Parks was not the first person to resist bus segregation, but the National Association for the Advancement of Colored People (NAACP) believed that she was the best candidate for seeing through a court challenge after her arrest for civil disobedience in violating Alabama segregation laws, and she helped inspire the Black community to boycott the Montgomery buses for over a year.

The case became bogged down in the state courts, but the federal Montgomery bus lawsuit Browder v. Gayle resulted in a November 1956 decision that bus segregation is unconstitutional under the Equal Protection Clause of the 14th Amendment to the U.S. Constitution.

On This Day: The Exoneration of Michael Morton