“Your services are no longer required.” Mr. Aku said with a smile. “My wife and I have sorted things out between us. Just yesterday after church and a nice Sunday jollof, she confessed everything!”

He reclined back in his seat, still smiling. His right leg swung from left to right in childish excitement. The man he was talking to sat on the other end of the office desk that separated them, his back against the only window in the room. He was James Ochi, the private investigator Mr. Aku had hired over a week ago to follow his wife; monitor her every move, and hopefully, find out who she was cheating on him with. James looked a bit addled, he straightened his tie and leaned forward, his hands clasped, as if in anxious prayer.

“I’m sorry sir… but what exactly do you mean by ‘confessed everything’?” he asked.

It was Mr. Aku’s turn to lean forward. There was a big smirk on his face and he gesticulated as he spoke. “See eh…I think it was yesterday’s message in church that touched her. The priest said something about lying…and I think marital vow…commitment…or something like that. I wasn’t paying much attention. But the way she behaved after eh, I could tell that something touched her.”

He chuckled and continued.

“She told me she had something to tell me. A secret that she’d been hiding for so long. At that point, my heart started to do gbim gbim. With the way she was talking and acting so emotional, I knew where she was going. So I just told her straight that if it was about her cheating, I already suspected. In fact, that I already knew sef. That all I needed from her was who she was cheating on me with. After much crying, she confessed. She said that it was Bello, one of our friends who got divorced last month. She said that he was lonely, that they started talking sometime after his divorce. And that she was lonely too, because of how much I travel for work. That it won’t happen again. See eh…I was angry, I won’t lie. Not so much at my wife anymore—because I finally understood her predicament. I was angry at myself. For letting her feel so neglected that she had no other person to turn to, but that baboon-faced Bello.”

His face writhed in disgust.

James sat there—a hand perched on his chin—studying him. For someone displaying disgust at another man’s looks, Mr. Aku wasn’t so handsome himself. His drooping cheeks made him look like a Pitbull. He had lost most of his hair. The parts that remained appeared in patches across his head, like stubborn grass refusing to yield to herbicides. The front of his head was completely bald; hair only existed at the back—with some stubborn strands on each side struggling to hang on. If someone stood in front of Mr. Aku, his head would look like an egg wearing a torn coat. If they stood behind him, it would look like the map of the world.

James wondered why the man didn’t cut it all and go completely bald. He had money, he didn’t need to look like this. He concluded that it was the same reason that made the fifty-four-year-old—after a failed marriage and five children—get married to someone twenty eight years younger than him. It was the same reason why the man still dyed his miserable strips of hair. Mr. Aku wanted to possess some semblance of youth at all costs.

“So now, James…” Mr. Aku said, bringing out his cheque book. “It’s time I pay you for your trouble, and we call it a day eh”.

James sat up, a serious look on his face. He spoke with hesitation.

“Sir…I’m afraid that I still need to give you my findings. I think you might want to see it”

“Ah…what more could there be to know? I’ve gotten what I wanted. I even know what I’ll do about my marriage. You know I’m serious about this woman. I’ll reduce my travelling. Maybe I’d even quit my role at the oil company and return to the family firm that my brother, Abel has been helping me manage. But now ehh, I just need to find a way to deal with that Mr. Bello” Mr. Aku stared at the documents on James’ desk for just a few seconds, in thought.

Mr. Aku’s eyes widened. He dropped his cheque book on the desk, slowly.

“Sir, see for yourself’ James fished out a dossier from the pile of files and paper on his desk. He gave it to Mr. Aku. It contained pictures. Pictures of his wife—Vivian—frolicking with familiar faces in restaurants, bars, and even a nightclub. When Mr. Aku spoke, his voice was raspy.

“This…This doesn’t mean anything. My wife is a social person and these are people I know, so this is really nothing much. Do you have more…more proof?”

“Sir, you asked me to find out who your wife was cheating on you with” James replied. “I did. One of them is Mr. Bello—she already confessed to that. The other two…”

James pointed at the pictures in Mr. Aku’s hands.

“…your brother, and Barrister Eze Williams, who is your lawyer, right? I also found them in my investigations. Now… I have the ‘more proof’ that you’re asking for: candid pictures with even a video too. But I always start with the softer set of evidence, so that I save my clients the heartbreak of seeing those that are more… you know…unchaste”

“James” Mr. Aku said sternly, shaking his hand with the pictures in it. “I asked for more proof, give me more. I refuse to believe that my younger brother is sleeping with my wife!”

“Okay, sir.” James quickly reached for a bag that sat by his feet. “I saved them in my PC because it’s more secure there” He brought out his laptop and entered its password. He clicked on a folder named ‘AKU AZUBUIKE’ and turned the screen to Mr. Aku.

The first picture showed Viv—wearing the shortest skirt he’d ever seen in his life—holding a hookah, sitting comfortably on the legs of his brother, Abel. He could see his brother’s hand gripping his wife’s breast. They were kissing. James watched Mr. Aku’s jaw drop, he could tell that the man’s heart was racing uncontrollably as he scoured the photos.

“Sir, I followed them that night after the club. They lodged at The Pristine Hotels. That was on Wednesday last week. They met again on Friday” James knew he wasn’t helping, but he always found this part of his job amusing.

Another picture showed his lawyer—Eze—sitting with Viv in a restaurant. She was smiling, looking pretty in a teal dress her husband had bought for her. James got up from his seat to Mr. Azu’s side.

“Sir, after this, they went to Flora Hotels. This was last Tuesday. Luckily, I convinced one of the cleaners I know well, to put a small video recorder in their room—they have a specific room there and they went back on Thursday. The video might not be too clear and the main part is also very short because you know…your lawyer…well let’s say, he’s very quick in bed”

Mr. Aku clicked either way. He couldn’t watch it to the end. Seeing his wife, naked, hopping like a rabbit on another man—his own lawyer—was too much to bear.

“I will deal with him too! The fool! But why? Why would she do this to me?” Mr. Aku was almost at the point of tears. The man didn’t bother looking at more pictures. He didn’t want to see Mr. Bello’s ugly face.

James returned to his seat.

“James, I will deal with all of them!” Mr. Aku interrupted. “My wife, I will divorce her! Why would she do this to me?”

“A what?” Mr. Aku looked enraged, amidst the tears.

“A pretty sexual…liberal woman, sir” James bowed his head, and bit his lip, his fingers tapped on the desk, impatiently.

Mr. Aku wiped the tears from his face and picked up his cheque book.

“How much is everything again?” He asked.

James tensed up before responding. “Sir, I wasn’t done …showing you my findings”

“Sir, I said there were two other men that your wife had affairs with, men that you know. There are some others that I’m still investigating. People…men that you might not know”

“In less than two weeks? My wife has been following all these people you investigated, in just two weeks?” Mr. Aku looked like he would cry again.

James didn’t respond immediately. At this point, he just wanted to collect his cheque and spare this man the trouble. But his eyes darted to the edge of his desk. Mr. Aku’s eyes followed his. They both stared at a dossier sitting where James had pulled the other one.

“Ninety thousand naira is the price for everything, Sir” The private investigator forced a smile. 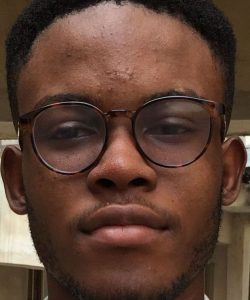 I’m Collins Undelikwo, a writer of stories, poems, scripts, songs, and anything at all that is ‘writeable’. A student of computer science in the University of Calabar who is fascinated by the tech industry. I dream of getting more of my stories published and having some turned into screenplays.

Working To Make It | Emmanuel Enaku

Reflections on Being a Writer | Chisom Arueze