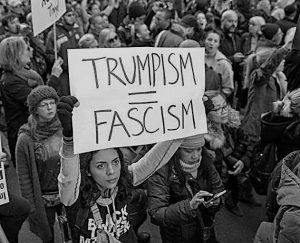 As you grow older, you’ll see white men cheat black men every day of your life, but let me tell you something and don’t you forget it—whenever a white man does that to a black man, no matter who he is, how rich he is, or how fine a family he comes from, that white man is trash. ~ Harper Lee

Donald Trump’s style and leadership will remain a thesis objective for scholars long after he has left the stage. A few months before he shocked the world with a victory over Hilary Clinton to become the 45th President of the United States, I had read a report of Trump’s response to the tragic massacre in Orlando by Omar Mateen, the radical son of a Muslim refugee.

Candidate Trump in his usual manner had condemned the political left while standing in solidarity with the LGBT community. He warned about the dire threat of radical Islam, and further reiterated his initial call for a blanket ban of Muslim immigrants. He said, “When I’m elected, I will suspend immigration from areas of the world where there’s a proven history of terrorism against the United States, Europe or our allies until we fully understand how to end these threats. After a full, long overdue security assessment we will develop a responsible immigration policy that serves the interests and values of America.”

After two and a half years in the saddle, Trump has shown no intention of throttling down. Rather he has continued to ramp up the ante with a barrage of unhinged typo infested twitter rants and gusty excoriation of enemies and even allies. Hardly will a day pass by without an offensive statement coming out of 1600 Pennsylvania Avenue.

His recent attack on four congresswomen of colour has been widely condemned and quite rightly so. But like I keep saying, POTUS 45 is a lot smarter than many people think. This new manoeuvre appears to be a well thought out campaign strategy to put the democrats in a spot because his words cannot legally be labelled racist. This perhaps explains why the impeachment motion by Rep. Al Green was roundly defeated by a 332–95 vote. Whatsmore if some equally offensive utterances attributed to those four have been applauded by the same section of the media why would they now be irked?

Some would argue that whatever xenophobic statements credited to the ‘squad’ — as they are now known —  cannot possibly have the same impact since they are not in the white house but together these four congresswomen command an increasing number of followers that could significantly affect the outcome of the 2020 race. And Donald Trump knows this. However, the truth is that his latest pastime, though a political scheme is not a new phenomenon. It brings with it a nauseous reminiscence of a past when America built different types of walls in a bid to preserve the warped hallucination of white supremacy as I will illustrate presently.

Besides the fact that the initial US Congress started work in 1790 by restricting eligibility for naturalisation to the freeborn and the white, immigrants were still pouring into the country for much of the nineteenth century.

However, at the peak of the immigration boom in 1921, a certain Calvin Coolidge penned an article which suggested that the teeming number of immigrants was an impediment to national development. Citing elite scientific scholars from the Ivy League, Coolidge who will later become the country’s Vice President argued that “biological laws tell us that certain divergent people will not mix or blend” and that “the dead weight of alien accretion stifles national progress”.

Together with some leading academics, the new Vice President sought to rationalise ethnically based racism by propagating the theory that certain immigrant races were biologically immune to diseases that would normally harm others. Asians were especially targeted. Italians, Slavics and even Jews were not spared as media editorials and op-eds ran savage pieces disparaging them as “Asiatic hordes and swines living in vast masses of filth that would kill a white man”.

It didn’t take long for Congress to acquiesce and subsequently the Johnson-Reed Act which is perhaps the harshest immigration law in US history was passed. And just like Trump’s recent Muslim ban, immigrants were shut out of America based on their origin. Ever since then racist scholars have deployed dubious anthropology and questionable theories to propound the genetic superiority of the so-called ‘Great Race’.

So you see, for the uninitiated, Trump’s political foray into neo American fascism may be as offensive as his wall and immigration policies are unpleasant but they are not dystopian actions that Americans and indeed the world are witnessing for the first time from Washington DC. For all its glittering immigration record, American history is dotted with unsavoury expositions of xenophobic assaults on immigrants, and oftentimes these attacks have been driven by race-based nativism.

But then the racists never had a free ride. They have always met a more than capable opposition in the liberals and a robust pushback from Americans both white and coloured. Together these groups struggled and made sacrifices through the civil rights movement that culminated in the passage of several laws in the 1960s. Of particular note is the 1965 Immigration And Nationality Act which abrogated the use of national origin quotas thereby ensuring that the country’s immigration policies made it stronger in diversity as some of the following facts from a recent article in Time Magazine disclose.

In the US, 1 in 4 tech companies established from 1995–2005 had an immigrant as either the founder, president, CEO or CTO.

Over 70% of the tech workers employed in Silicon Valley are immigrants and over 60% of the 25 biggest US tech companies were founded by immigrants.

Apple’s Steve Jobs was the son of a Syrian immigrant and Google’s Sergey Brin is a Russian immigrant who first stepped on US soil with his parents at the tender age of six.

In 2017, Fortune listed 500 companies, 43% of which were founded by immigrants and these companies employ over 12m people globally.

These and many others attest to the truth that America’s global dominance was achieved through an ingenious immigration system that often imported the best talents from every corner of the earth. Surprisingly, America is currently led by a POTUS who labels immigrants murderers, criminals and terrorists thereby lending credence to the outlandish conspiracy theory that the country’s perceived enemies seek to destroy her not with bombs but through a gradual and articulate decimation of her greatest ideology.

Personally, I am a Trump fan. I love and enjoy the spectacle he produces daily, his “carrot and stick” approach to international conflicts and his willingness to get along with perceived enemies like China and Russia. I also understand that he is playing politics to win reelection as evident in his late show to impress black voters on the A$AP Rocky saga. And quite frankly he is likely to be re-elected given that his base remains intact according to the polls, but his incendiary and racially charged rhetoric will further polarise the US into multiracial Democrats and white Republicans. Already the world has seen his Muslim ban, ICE raids and lately a Supreme Court ruling funding for his coveted wall come to fruition. Who knows what will come next?

In the quest to retain power the Republicans may be unwilling to condemn Trump’s nativism now but they should know that the tipping point is nigh. The white supremacists and their flock are roundly outnumbered. And now that the suburban moderates who were key to the 2018 takeover of the House, more blacks, and other people of colour are joining the resistance against blatant racism, there can be only one winner. For a country with such a rich cultural heritage, America has long moved past that nonsensical ‘white man’s country’. Bringing it back now is only a political aberration which may have benefited Donald Trump but will ultimately prove to be a pyrrhic victory for the Grand Old Party.