Home Blog The murder of priests should not be politicised.
Post Views: 23 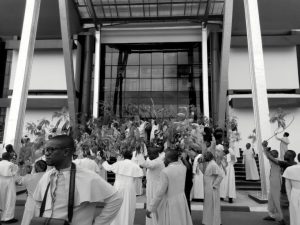 A few days ago I had asked why the protesting Reverend Fathers in Enugu failed to do the same when some Catholic faithfuls were massacred in Ozubulu. The post expectedly drew the ire of many hypocrites including some cowards who hitherto dare not address me directly. But of course, we all know I don’t suffer fools gladly neither do I take prisoners. So I told them to shove their silly opinions up where there is no sunshine.

The outrage was hysterical given that just 5 months ago another Catholic priest was brutally murdered in the same Enugu state. Our Reverend fathers have had enough and quite rightly mounted a public protest calling on the authorities to protect them.

No sensible person will query the propriety of that protest. However, they made a mistake or should I say a deliberate mistake in blaming the ‘murderous Fulani herdsmen’ for a crime still under investigation.

The Communications Director Catholic Diocese of Enugu Rev Fr. Achi told reporters that Fr. Offu was stopped by the murderous herdsmen while returning to his parish after visiting another priest.

He specifically said: “They dragged him to the bush but one of the assailants said kill him that the church would not do anything if they kidnapped him”

Don’t ask me if he was there. These are men of God blessed with extraordinary abilities.

Now let me rejig your memory.

Last March when Fr. Ugwu was abducted and his decomposing body later found in a bush. There was also this type of outrage and the heinous act blamed on ‘Fulani herdsmen’ even before the police commenced investigations. Who else would kidnap and murder a clergyman in cold blood if not the usual suspects?

As it were, the security operatives swung into action and by April the Enugu state police command announced that they had apprehended two leaders of a four-man kidnapping gang. They had used the late priest’s ATM card to make withdrawals from his account.

Well, the police have once again made some arrests on the latest case and the word out there is that the late Fr. Offu’s account was cleared 25 minutes after his death.

Do you see a pattern?

A bank insider said that “there was a need for the security operatives to look inward and ascertain who actually made the ATM withdrawals….”

There is a pattern here. Have you wondered why it is mostly Catholic priests? Apparently, these are inside jobs to loot the church treasury because unlike their Anglican colleagues Catholic Reverend Fathers are in complete control of the usually healthy parish coffers.

Its a piece of cake for dumb criminals. Kill and clean out the account while the people scream help you to distract the police by screaming ‘fulani herdsmen’. You then have adequate time to get far away. The killers of Fr. Ugwu nabbed in April were arrested in Abuja where they had relocated with their families.

You see when we say things as they are we are labelled all sorts by people too cowardly to speak their minds. The person who ‘nicodemusly’ sent me this news is a chronic ‘Islamisation propagandist’ who knows the truth but will rather dance to the gallery of ‘Fulanisation’ on social media for fear of being labelled anti-Igbo or an efulefu.

Nobody is defending the govt’s struggle with the rising insecurity neither am I saying there are no criminal herdsmen. However as an Igbo man conscious of the evil Igbo domination propaganda that ultimately ended in a bloody civil war I ALWAYS feel obliged to speak on the dangers of the current ‘Fulanisation’ fallacy and hate-mongering.

I have always wondered the usefulness of such silly talk. How will it dethrone Buhari or curb the rising insecurity?

We need to be careful with the sentiments we propagate. Let us join hands in holding the government accountable while insisting on improved security. And the least we can do in this regard is to put the correct facts out there because not only do the unverified stories pit Nigerians against each other they also make solving the crime more difficult for our security agencies.

All lives matter and the killing of priests should not be relegated to infantile political propaganda.

On This Day: The Official Resignation of Pope Benedict XVI

On This Day: Remembering Leah Sharibu