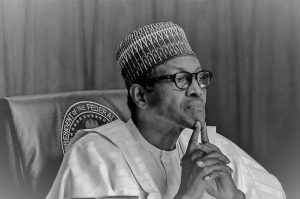 It is the fool who always rushes to take sides. Do not commit to any side or cause but yourself. By maintaining your independence, you become the master of others — playing people against one another, making them pursue you. ~ #20 in Robert Greene’s 48 Laws Of Power

I am always entertained by the social media rants of my fellow country people. Ours is a country that is never in lack of news stories and trust us to milk, twist and turn every topic to suit our subjective narratives. And in an executive system of government, the buck always stops at the commander in chief’s desk. That’s why Nigerians demand solutions from the president even in matters that should otherwise be handled by a ward councillor.

A common portrayal of President Buhari on social media and sometimes in the mainstream is that of an apathetic leader immutably aloof from our constant bickerings. That he is a stooge oblivious of the happenings around him let alone in the country. It has even been suggested somewhat preposterously that the ‘cabal’ led by Kyari has him caged and controlled at their whim. And these speculations have oftentimes been fortified by the periodic outbursts of an outspoken First Lady who doesn’t shy away from the mic whenever her interests are seemingly encumbered.

But I am not fooled and you shouldn’t be too. How can I possibly believe that a man whose lifelong ambition was to become the president is unaware of the happenings around him? The President knows exactly what he is doing but perhaps like my village people will say he doesn’t know what is ‘doing’ him.

Doubt me? Let me explain my position with this brief historical account of the life and times of Queen Elizabeth I.

The 16th Century Queen of England popularly known as the “Virgin Queen” is reputed to have stringently utilised Robert Greene’s 20th law up till her death as a single virgin. For many years after her ascension to the throne, she was continuously pressurised to get married to the extent that it became a topic for debate in the British Parliament. But she remained calm in the midst of all the speculations and never argued against the Parliament while she manipulated two French Dukes with hopes of marriage in order to get a peace treaty endorsed by France and England. Her non-committal strategy was used to the Empire’s advantage which eventually underlined her reign as a period of incomparable peace and cultural fertility.

Perhaps no current leader exemplifies this law better than Donald Trump. He is committed to none but himself and has fired more officials than any other American President. Through his campaign, he held the GOP by the jugular and even threatened to go it all alone with the people if the party refuses to back him. Now as the POTUS, when he does not get what he wants from the Republicans, he threatens to work with the Democrats just like he praises America’s adversaries when he wants to get more from her allies.

It is this same tactic that President Buhari has ‘hybridized’ and continuously deployed to his advantage. In his running battle with the Saraki led Senate, in taking the anti-corruption war to the judiciary and against his political opponents in the run-up to the last general election. In order not to bore you with past stories we shall explore a few recent examples.

Not long ago we were shocked with the news that the National Security Adviser accused the president’s chief of staff Abba Kyari of undue and dangerous interference on national security matters. In a leaked memo the Monguno disclosed that the insubordination and uncooperative attitude of the security chiefs precipitated a lack of central coordination of other security agencies in the country with the resultant deterioration of an already precarious security situation.

Nigerians bayed for action, demanding Kyari’s sack while reiterating the call for an overhaul of the national security apparatus. Our lawmakers joined the chorus too and asked the president to consider replacing his service chiefs. Buhari did not budge. What came of that?

Thereafter the squabble in the ruling APC which hitherto was limited to Oshiomhole’s brickbats with his political godson in Edo state burgeoned into a full-scale war for the party’s leadership. Clandestine meetings were held, alliances were forged and battle lines were drawn. The pro and anti-Oshiomhole groups filled the political space with noise and chest-thumping.

Many called for Buhari’s intervention to quell a rising inferno with potentially cataclysmic consequences for his party and by extension the country. The man didn’t utter a word. Even when the matter became the subject of litigation in different courts he maintained his silence. How did that end?

Currently, many Nigerians have suddenly turned into doctors and medical experts since the #COVID19 outbreak, dishing out ‘information’ via posts, essays and even videos on how to beat the virus with garlic, bitter kola and brine. The more politically charged citizens have been infuriated by Buhari’s stubborn unwillingness to address the nation notwithstanding that the NCDC ably led by Dr Chikwe and other health agency have been on top of the matter updating Nigerians almost on an hourly basis. Whatsmore the President has mandated the SGF Boss Mustapha to coordinate these efforts.

But we are implacable, many want to see the president himself talking directly to the nation in a press conference. Ironically most of those demanding this are only interested in hearing the president goof rather than the measures taken by the government to combat the crisis.

Nevertheless, you have to understand their collective peeve. I mean what could possibly be more exasperating than seeing the pictures of Lagos state governor Sanwo-Olu presenting the president with the visuals of last Sunday’s tragic explosion in Abule Ado? What manner of insensitivity is that? And coming just days after the same President was pictured live in Argungu beaming all 32 as he was welcomed by dignitaries for the fishing festival.

Does he really care about others? Does his media team understand the meaning of optics? Do they appreciate that perception is key? Have they not seen many other leaders addressing their nations? A leader must not only lead but must be seen to be leading and this president promised to lead from the ‘front’.

Still, the president maintained his frustrating or delightful (depending on your side) defiant disregard for the norm. Preferring to let the experts charged with the task of battling the deadly virus to speak to Nigerians while releasing updates via aides and his twitter handle.

When he eventually addressed the nation what happened?

You see, we believe that leaders once elected by us should lead by our prescription. Well, that is how it is ‘supposed’ to be. On paper, so to say. But that is where it ends. In reality, it is, of course, a different ball game. Even though our thinking, perceptions and opinions may not be lost on leaders, but because we all have different parameters of how issues should be tackled it becomes impossible for any leader to satisfy everybody. This is a philosophical fact carved on marble.

Buhari has managed to hatch a potent mix of Greene’s law №20 and the philosophy of Carl von Clausewitz. The Prussian General had theorised that a leader who knows how to organise his troops does neither too little nor too much to achieve the desired target but rather “it is the exact fulfilment of silent suppositions” and “the noiseless harmony of the whole action which we should admire, and which only makes itself known in the total result”. Call it selfish but it is what it is. An agelong strategy to consolidate power.

A Nigerian youth @MalachyOdo1 succinctly summed it up thus: “I used to think Buhari wasn’t aware of most things happening in the country until that time El-Rufai demolished Senator Hunkuyi’s house in Kaduna and the next day when they met GMB called him BULLDOZER. He addressed the nation twice in a week before the elections”.

So my dear friend, do not allow yourself to be coaxed into believing that an ex-head of state, a US war college-trained strategist and a man described by the BBC as a “taciturn General given to less talk and more action” doesn’t know what he is doing. If you have interacted with a real soldier you will know better. They are like athletes. Their faith in their own sweat equity confers a kind of contingent confidence. And this even more so for soldiers who not only sweat but shed their blood for our collective well being.

There is nothing utopian about politics and governance. They are dynamic affairs usually dependent on the existing variables. It behoves the responsible and proactive leader to synthesise the information gathered by adjutants to make decisions. After all, the ability to get results out of your team is also a great leadership quality. Whether or not these decisions and results are right, will remain debatable for years to follow. So I think that in Buhari’s case it may be more of a resolve long made to be judged by posterity than a complete disdain for the yearnings of ordinary Nigerians.