Home Essays A Good Opportunity Which I Lost by Precious Ushang.
Post Views: 43

The age-old maxim that says ‘’A stitch in time saves nine’’ remains valid in all life situations. People
who do not heed this advice will have only themselves to blame. Dealing with a problem at its initial
stage requires planning, which is often taken for granted. As Benjamin Franklin first said in 1723, ‘’A
stitch in time saves nine.’’ He was basically saying that if you sort out a problem immediately, it may
save a lot of extra work later. I just can’t resist quoting the great man in this context.
Little problems that can be solved easily develops into a huge one when we ignore it, thus, giving
rise to confusion and loss of precious time and energy in untangling it. There is a small story to
illustrate the point. The story I am about to tell is an extract from my autobiography. I want to
narrate an experience I have had. I have chosen the extract from the bulk of the story because of its
undeniable moral lesson to me and anyone who cares to give the story a glance, however casual.
Before I start narrating my experience I have had about this saying, I would want us to know what
we mean by the phrase ‘stitch in time.’ In fashion, if a piece of clothing is slightly torn from one side
and if we ignore that for some time, that may result in a widened hole in that cloth and the cloth will
not be of any use. By this explanation, I believe you must have had an idea of what a stitch in time
mean. Well, let us go over to the story.
It all happened on a Sunday evening in the month of August 2020 when the cmonionline essay topics
for the first weekly essay competition were posted on Facebook and I was privileged enough to see
it as soon as it was posted. I went through the write-up and the instructions to know how I would go
about it. Then, I realised that the second topic which goes thus, ‘’Your Takeaway From The COVID-19
Pandemic.’’ I was wowed and i felt overconfident because I had already written about the topic for
personal purposes and it was saved in my laptop. So, I thought there was nothing to worry about.
Although, I knew my laptop was faulty but I did not bother to check it to know where exactly the
fault was from. I felt that since the essay was something I already had an idea on, I did not care
about that. All I cared about was how to go about other daily activities.
On Thursday, when I was supposed to submit my essay on the website, my phone and laptop were
low, due to the fact that there was blackout. I was hopeful for the next day being Friday, which was
the last day of submission for the week. But there was power failure, as a result of the heavy
downpour which occurred earlier that day. I had no choice than to wait till evening when the
generator would be put on. At 8 o’clock in the evening, immediately the generator was on, i
hurriedly started editing my essay—which became successful. After that I went to the website and
carried out the necessary instructions. Then, I proceeded to paste and send the essay to my phone
but to no avail because of its fault. I began to feel restless and I started running helter-skelter looking
for who to help me but I couldn’t be helped.
At the eleventh hour, I started praying to Mother Luck to turn back the hands of the clock, increase
the hours of the day from 24 to 48 or, better still, cause the submission deadline to be postponed
indefinitely .When it became so obvious that I could not help the situation, I resigned to fate
consoling myself in the fact that what would be, would be inspite of all odds. I then thought that I
should have taken action immediately. I regretted my nonchalance thereafter and did not know
when I said in my mind ‘’It is true that a stitch in time saves nine.’’ But notwithstanding, I really
learnt my lesson.
Moral of the story: A Stitch In Time Saves Nine. The meaning of this age-old proverb is quite literal. It
effectively warns us against our own neglect, laziness, ignorance, small faults, unseriousness and
imperfections. It makes us realise that we must not ignore the warning signs of any kinds because
someday the situation or condition may become unmanageable or may not be in a state to be
remedied at all. This idiom is relevant even during this time. People should not become careless
about the social distancing measures and face masks . Similarly, in life, it is better to tackle all
problems at an early stage. Delay in finding a solution to a problem only complicates it further
making it difficult to undo the knots. 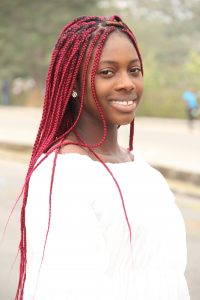 A Stitch In Time Saves Nine by Osanyinro Oluwaseun.