Home Essays When Will The Nigerian Youths Be Attentive? by Chisom Precious
Post Views: 13

“I Stan Erica” “ I Stan laycon”  and that has been how I  watch the BBNaija show with no gotv or dstv subscription. Everyday am constantly being slapped in the face with updates from this reality show.

Over the years the Nigerian creative industry has kept the Nigerian citizens some what happy and forgetful of the inevitable hardship in the country. These shows act like a momentary anaesthetic , numbing the pain of the imminent failure our dear country is tilting to. Viral shows like BBNaija, project fame West Africa, Malta Guinness dance all, Nigeria got talent, The voice Nigeria, gulder  Ultimate search, who wants to be a millionaire and so on were created to entertain the populace,which it has  done so  incredibly well.

Shows like this  present the wonderful talents of Nigerians. They also served as a platform  for their contestants,  the actual starting point to stardom for  some of them. Without these shows there would be no Chidinma Ekile, Ebuka obi- uchendu, Kunle Remi,Uti Nwachukwu ,the famous tacha and mercy of BBNaija and a host of others. These shows have also displayed the vast Nigerian tribes and culture, explored  it’s various beautiful landscapes thereby giving future tourists a reason to visit Nigeria. I for one took a liking to shows like the maltina dance all, gulder ultimate search and specially the who wants to be a millionaire, for it increased the span of my knowledge and encouraged me to know more.

Now we are in the internet age where you can get answers to all you seek  just by putting it on a search engine and whether we like it or not the response  we get shape how we view things. This is also an era where young adults and youths have their values built around Facebook, Instagram or Twitter posts. As of now their views on certain issues vary from the usual because they are ‘stanning‘ and ‘restaning‘ one celebrity cum role model. It is now a show me who you Stan and I’ll tell you what you character could be like thing.

The reality show, Big brother Naija which began in the year 2006 since it’s inception has not done the best of work in helping the youths morally.The airing of live sex has absolutely no impact on the viewers.With the corona virus stopping Schools and jobs, leaving a greater part of the populace which are young adults and youths idle, it became a thriving ground for the reality show . Statistics says that during the final week of the show in 2019 it garnered  up to 50 million votes and 240 million votes for a two weeks duration. This would leave you to  imagine the numbers it would pull in this year, all thanks to the lockdown too.  In the course of watching this show our youths lose themselves, often forgetting what the real problem is and what to focus there energy on. Due to the love they have for their favorite contestant, they end up endorsing absurd behaviors  displayed by this said contestant, and that can act as a yardstick they use to judge themselves.

Unemployment has been on the rise since the  beginning of the pandemic and the government has not been considerate either. It’s no news that the electricity tariffs and fuel price has been increased. Fuel which was formally sold 125 naira is now sold 160 naira per litre, and electricity units  for a prepaid meter which was 15 units for 500 naira is now 8 units for 500 naira. Such a drastic change. This  will bring  about the hike in most things thereby making life harder for the average Nigerian. Issues like I mentioned is yet to trend  like the disqualification of a certain Big brother Naija housemate. Some fans of the said housemate went  as far as donating money for her. A go fund me account was created and a whopping sum of 15 thousand dollars was raised in 5hours . In pidgin English I would say  e weak me, at that point I now understood that the youth have indeed a long way to go.

In my honest opinion  we should all laugh off our stress and  entertain our selves, but when that serves as  a way to avoid important things which should be our priority, it poses more of a problem than an entertainment. Also with the way things are going I wonder what will become of our youths in years to come.  The amount of attention given to frivolities is a cause to worry .This leaves me with the question, Are we truly what our dear president called us? “The lazy Nigerian youth”. 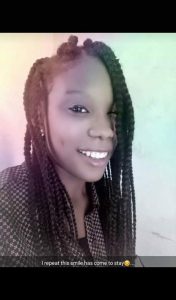