I don’t deserve it; deep down, I know.

It was in the last days of July when I met Mr. Kelvin in church. He was of average height, dark and had a deep bass voice. Based on the introduction our choirmaster gave, I realized that Mr. Kelvin was once a star instrumentalists and composer during his tenure some years back, even before I joined the choir. I was among the clique of very few people who didn’t know him — every other person showed great degrees of closeness either by hugging him or shaking his palms vigorously or by lauding a nickname he certainly found customary.

“Thank you, everyone.” He shot his head up. Some quiet began to grow.

“All glory be to God, for the grace and gift he had given me,” his palm kissed each other noisily before falling back to the table upon which they rested earlier.”

“But I want to urge each one of us,” his index finger looked at everyone seated, “to do our voice training regularly and abstain from cold water, oily foods and anything that spoils the voice.”

“Be eager to learn,” I could feel the energy and passion in his voice, “try new things, be deliberate in your practice and group rehearsals.”

I stared at him, in his place I saw success in human flesh; I saw fulfilment, I was motivated by his talk. I wanted to take my musical development more seriously and become the best chorister in my parish — and beyond.

Gabriel, a fellow tenor singer tapped me on the shoulder, “See as Sis Amaka is pressing phone. After, she’d say the younger ones are pressing phone in rehearsal.”

I wasn’t interested in that talk at that moment, yet I didn’t want to be snobbish. I just gave an E’hen reply and returned my focus to where it was meant to be.

Mr. Kelvin spoke for no longer than seven minutes because we still had rehearsals to do that day.  But it seemed like he spent about thirty minutes — and I didn’t want him to stop giving the musical pep talk. When I noticed that he was about to go, I took permission to go to the toilet but waited around the passage to the exit of the church building — I waited patiently for him.

My peripheral vision captured my chest beating up and down, I realised that my breath was deeper than normal. I watched him. He was delayed more than usual by faces he found familiar along the way. But I was determined to see him, tete-a-tete.

He was walking down to where I was. My heart rate increased with every closer step he took.

“Goo-good evening sir,” I felt I greeted too softly, “Thank you f-for your talk this evening, sir,”

“Oh… It was nothing bro.” he waved his right palm downward.

Did he call me bro? I was ecstatic.

“Just heed to my humble advice by putting them to practice and you’d be a better chorister.”  His smile was natural and his face brightly lit. I inhaled the deep manly perfume he wore; it was refreshing — the scent successful men wore.

“Errmm… Sir, please I want to ask you a question, sir.”

He turned to me sharply. “Go on sir.”

He was too humble; how can he, a successful man in his late twenties most probably call a seventeen-year-old random teenager like me “sir”?

“I want to learn how to play the keyboard as well.” I scratched the surface of my head, “I want to be as good as you are!”

He blushed but quickly hid it. “I’m not good enough o… I still have a lot of practice and training before I can call myself an up and coming keyboardist.”

“What?!” I exclaimed even without thinking.

A man, in cream coloured cassock, was coming towards us — it was a Rev. Father Jude.

“Good evening father.” we both chorused.

“Evening, brothers in Christ,” he smiled, “how are you doing today?”

“Fine, Father.” we chorused as he passed by. I was expecting to smell burned incense as father passed by but a fine lavender fragrance trailed behind him.

“So you want to learn how to play the keyboard?” he queried after a brief silence of watching Father Jude’s gait.

“Yes sir.” I know that you are a very busy man but all I need is access to a keyboard for practice. I know a cheap and fairly used Casio keyboard might be around 15 to 30k. But I have been able to save up to 7k, sir.”

His walking ceased as we reached the main gate to the church.

“And I have a keyboard I want to sell off oh…” he brushed his beard with his fingers, “a ‘toy’ keyboard like that.”

“Please sir, sell it to me, I’d pay the 7k now and get you your balance later by instalment.”

“Don’t worry, just give me your number.”

We could hear a car horning repeatedly on the main road. Traffic was about to take shape. I had not memorized my new phone number and so, he gave me his number; I immediately dialled it so he could get my number. I looked up and I had a glimpse of a signboard that read: St. Dominic’s Catholic Church. I ran back to the choir rehearsal ground happily. I was more than excited.

Some days later, on a Saturday, we met at an agreed place and at an agreed time. He gave me the keyboard; It was a five-octave keyboard. And that was no toy to me! I wanted to count out my 7k but he told me to keep the money. He said he was happy to see a fellow chorister so passionate about learning an instrument and so was willing to help me achieve that goal. I still couldn’t believe it was my reality — I got a real five-octave keyboard for free!

When I got back home, I told mom. Happiness was a green paint that changed my mummy’s face. I thought of no other thing than to await NEPA to bring the light. I recall when NEPA finally brought the light; I remember playing the keyboard, till NEPA’s electricity failure did us apart. That was when I reminisced that I had not ironed the attire I would wear on Sunday the next day. But I was still too delighted to be worried about that. 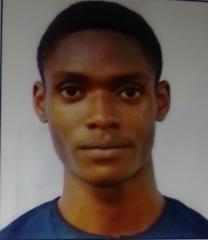