Today the notorious unknown gunmen attacked a bank in Abagana, Anambra state. They reportedly shot sporadically in the air to disperse customers, set some vehicles ablaze and hoisted the Biafran flag. This is coming after reported attacks killed three police officers on ‘stop and search’ duty along Onuebonyi, Nwezenyi Road, Abakaliki, Ebonyi State. 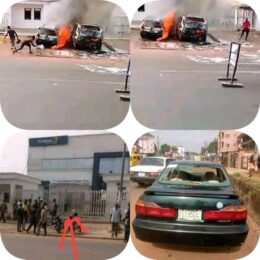 Expectedly, IPoB and their horde of online disciples are now screaming that the DSS is behind these attacks by unknown gunmen which have become a daily occurrence across Igbo land. Ironically the same IPoB and the same followers have been tweeting in support of the faceless hoodlums to justify their bid for secession.

We warned but we were labelled all sorts. You see Nigeria’s political history isn’t too far fetched but disappointingly quite a lot of supposedly educated people are ignorant of recent happenings.

In 2007, Boko Haram’s campaign of violence started with similar attacks and eventually grew into a hydra-headed monster. We all watched video clips of how Mohammed Yusuf the founder of Boko Haram was murdered extrajudicially by the police. We saw the initial attacks on military targets and eventually on civilians.

Stephen Davis, a former Anglican clergyman who negotiated severally with Boko Haram attributed the genesis of the crisis to local politicians who use militants to intimidate their political opponents.

The insurgency soon relegated the so called salafist wahabbism for economic gains which benefitted the criminals, corrupt military/politicians and even the so called NGOs. However, the brunt was mostly borne by the innocent masses of the North East.

Now I will leave you to take a look back at the timeline of IPOB’s metamorphosis.

Frankly, I believe that the conflict with the Nigerian state is already here in the South East and there is no running away from it. By the time the military is fully deployed and all other profiteering contigents are embedded here our region will be like the North East.

They say once beaten twice shy but that wise saying sounds discordant right now because the truth is that a majority of Igbos support IPOB. So we should be ready for the consequences of their actions or inactions. At the end we will realise once again that there was never a good war, or a bad peace.