He was just like a string attached to me.

Like the yellow wrapper that would always adorn the waist of mama every Sunday whenever she came back from church. The wrapper was a custom wear, sometimes I did wonder if the numerous visitors that paid us homage at our house after Sunday service thought that mama was birthed with the wrapper about her waist.

Dele however, was much more attached to me than I could possibly describe. We both shared an uncommon chemistry, a sensational magic that felt so strange yet so real — or so I thought. Dele was just right, I felt he was. I loved the way he called my name, his deep baritone hummed my name like a sonorous symphony. He never calls me just plain “Amara” like others did. He had strong habituation to mark his spot with obvious difference, so he chose to call me “Mara”. I loved the name, not just because it sounded so nice but because he loved it too.

I enjoy hearing him talk, I barely listened though, I often drooled off. I liked to imagine his voice if he were a hefty sailor, drowning my worries and doubts in the sea of my love for him. He basked proudly in a beautiful tan the tone of black chocolate. Dele had very red lips that it reminded me of the insides of an udara, his teeth were perfect that a smile from him shoots like a flash of lightening — mesmerizing whoever beheld the majesty of his smile.

Dele is Yoruba. We had met in the annual departmental Get-together in the university. Dele was a senior course-mate, he joined the program a year before I did. That night, he doubled as his class Rep and as a new star I found. I was the one chosen to officially introduce my colleagues to the student body executives at the programme, Dele was among them and the rest has sprung to history, a bitter history though.

The bitter experience came in just a day like any other, meant for me to conquer and subdue. I was in my final year in school while Dele was out, we had rented a nice apartment in a fine estate in the university city. The job that Dele landed with an accounting firm afforded us to financial advantage to do this.

A night before that fateful day my trust for men was murdered., I was curled up in the Devil’s laps, listening to the well-crafted arrangements he said he was making for us. He would be traveling to the capital city, he had a huge project to tender to his constituency senator in partnership with his colleagues, but I didn’t hear him — I never did. I simply trailed off, losing my guard like I always did to the hefty sailor that drowned my worries in my imagination.

The call from Angela, my best friend in school came at what I had perceived to be at the most unwelcome hour. I had ignored it at first but the persistent ringing seven times later triggered me to jerk up in annoyance to rain abuses at my friend.

“What in the world is wrong with you”, I barked at the phone.

“… Don’t you realize that they are certain times that you are not expected, never ever expected t….”, my mindless blubbering was halted by the cool, all-knowing voice of Angela.

“Shut up and listen if you ever want peace, El Dora hotel is the place. Room 403. Don’t ask questions, walk in and see your foolishness”.

I didn’t remember hearing the call hang up. My hears screeched of loud whistles. My head seemed to suddenly vacuumed of all its air as I made moves to see my folly for myself.

I arrived at the hotel in less than 30 minutes, Dele had not left the city as he told me I presumed. I scurried up to the said room and luckily met the door unlocked, I swung in and found Dele in a tight sexual scuffle with not one but three heavy women. They were all drowned in sweat when I came in on them.

I have been fooled stupid to have assumed that I was a winner already.

My entire existence has been drowned by the same hefty sailor, this time throwing me overboard instead of my fears.

The unexpected came two weeks after this event. Dele came to visit me in the apartment I hastily rented to cool my head.

“It was a prank!”, he kept screaming outside after I shut my door at him.

“It was a prank I swear, come look at the videos. It wasn’t what you were thinking. I had it all planned.”

Those lies not only shocked me but bagged the anger so mucjh on my face, I knew I would never ever give Dele a chance in my life again.

Never again to a wicked sailor that tries to cover his betrayal with a cheap 21st century madness.

Chukwuemeka Mbam can be reached through mbamchukwuemekaa5@gmail.com 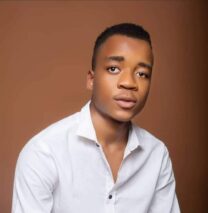