She was yellow and tall. She had very dark hair, almost jet. Her eyes were mesmerizing just like polished marble. Her parents told you she was fifteen, seeing her now, you were in doubt. She was quite older. You knew the drug she was taking had built a castle in her head which only persistence and patience would destroy.

She held the spoon with her left hand and she gripped the sauce with another. The white powder in it was so small and you were wondering how much she paid to get it. She brought the spoon closer to her nose and she dropped the sauce. She brought her left hand to her nose and pressed the side of her nose and sniffed the content of the spoon. She dropped the spoon and jerked. Her eyes were like that of a mouse caught in a mousetrap. Her eyeballs were almost sienna-colored. She shook her head violently. She went still and smiled at someone you couldn’t see.

You were twenty or twenty-five when you became an addict. What led you to drugs was so strange. So sudden that you didn’t see it coming. Your friend Jessica told you it won’t hurt at all. Just a shot, she told you. After that night a strange form of invisibility wrapped around you. At first, it was a shot a day, then three a day. You were invisible to everything around you except cocaine. Your relationship with others fell, your friends left you except Jessica. You were fading just like a Rose. Your once red petals turned grey. Your life became miserable until you reached out for help. You told your parents and they were scared the moment they heard about it. They prayed for you and they contacted a therapist that gave therapy. He told you that you should abstain from it. Think about something else, he told you. It wasn’t easy, you had this great fear of a toddler taking his first step. You fell sick for weeks and in the end, you left drugs.

You dropped the window blind and walked into the room. The girl dropped the sauce and gawped at you. You smiled took a pinch of the powder. The fear and surprise that found expression on her face faded and she smiled.

“ You should be in the garden,” she said.

“ l know” You replied and took a pinch. She didn’t know that you were a therapist instead of the gardener you claimed to be. You took a pinch of the drug and sniffed. She gazed at you, expectantly. She thought you would jerk and shake your head violently, but you didn’t.

“ Yes,” you replied and took another pinch.

“Somewhere” was her reply.

“l love to relax with this, it cools me. It makes me fresh and when l trim those flowers. I do it well “ You said.

“ l escape with it,” she said and took another pinch which she sniffed. You were surprised to hear this. Escape?

“ When they come, you know they hate me. Everyone, including dad and mum. When l was raped, they said it was my fault. They said l was too carefree. So to escape from those memories l take it. “

You shook your head and wiped your hands on your trousers. The girl sniffed and licked her thump clean of the powder. You wondered why her parents didn’t tell you she was raped. Perhaps it was shame. She wasn’t tricked like you, she was molested and her way of escape was cocaine. Though wrong, you understood her predicament.

“ l wanted to kill myself. I could feel his breath. His voice in my head and l know it is all my fault” she said.

“ So when did you start taking cocaine pots?” You asked.

“ Three weeks after the incidence. When l take l don’t feel his touch again, his sticky skin against my skin like it was the night he raped me. His face faded from my memory” she said and scratched her chin.

“ So why the hate? Mum doesn’t regard me anymore. Everyone laughs at me at school, the news is everywhere. Every time l feel like dying and if not for this” she said and took another pinch.

“ You feel cool from the inside when you take it,” You said.

“ Yes. I feel cool but my body can’t stand it. I jerk, l am surprised you didn’t shake at all” she said.

“ You know l have been taking this for a long time, but l can tell you, l enjoyed myself. But l was dying, so l..l….”

You paused and stared at her like a glorified fool. You almost revealed your secret.

“ But you are still taking it.” She said and frowned.

“ You know l did stop at a point in my life. You can

Stop if you want to…..anyway when are your parents coming?”

“ Let me clear this up, dad and mum can arrive any minute. Nice sharing the pot with you” she said and wrapped the rag beside her around the sauce.

“ Yes for the pot” You lied. You were glad she revealed what drove her to drugs. In most cases, addicts conceal what fell and give therapists tough time. You stood and shook her hand. You left the house elated that the fading rose would blossom after your Job. 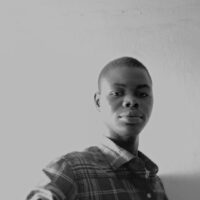