Home Writers Opinion Articles Cross-Dressing In Nigeria: Should We Be Worried? by Michael Ogbonnaya.
Post Views: 71

The trend of cross-dressing or transvestism is reaching new and unprecedented heights. It is gradually creating numbness in our conservative senses. Cross-dressing in simple terms can be defined as wearing clothes and accessories normally associated with the opposite gender [1]. Cross-dressing, which is more prevalent among the male gender, is often linked with perversion, fetishism, exhibitionism, sexual deviation, and homosexuality [2]. Some cross-dressers, known as drag queens, usually wear conspicuous outfits in a consciously exaggerated display of feminity. Other drag performers dress up in dramatic costumes to perform on stage, in nightclubs, or on television.
Although the Nigerian society is culturally diverse, it is also very conservative and deeply rooted in religion. Hence, it is no surprise that the act of cross-dressing, which contradicts the two Abrahamic religions practised in Nigeria, is largely unaccepted. There are opinions that the nuanced nature of transvestism serves a purpose than those speculated by conservative societies. Cross-dressing in Nigeria is not illegal but it undermines the moral fabric of the society. Morality is socially constructed and it is always reflective of a society’s values and virtues. The establishment of a moral standard helps to determine the parameters of socially acceptable behaviour. For instance, while it is normal for men to wear skirts in Scotland, it is considered illegal in Italy [3].
In Nigeria, there is little criticism or discrimination against cross-dressing for entertainment purposes. Nigerian musician, Charles Chukwuemeka Oputa, popularly known as Charly Boy, gained prominence in the Music Industry while appearing as a drag queen. Also, very few eyebrows have been raised about the act of cross-dressing for comedic purposes. Instagram skit makers such as Mama Tobi and Zicsaloma among others have gainfully exploited cross-dressing to create hilarity. Many Nigerians laugh at their jokes without any suspicion of an ulterior motive attached to their preferred dress code.
There is another crop of cross-dressers who have received intense criticism and stigmatization from many Nigerians. Their level of prominence is somewhat tied to their ability to ruffle the hornet’s nest and create controversies about their sexuality. Media personality, Denrele Edun, renowned for his notorious cross-dressing and eccentric behaviour seems to be the poster boy for this category of cross-dressers. Other cross-dressers in this rank include Bobrisky, James Brown, Jay Boogie, etc.
While Denrele prefers to call himself a sexual outlaw, Bobrisky prefers to be described as a ‘she’ and ‘her’. Although they have vehemently denied allegations of homosexuality, there are serious concerns that most Nigerian cross-dressers are homosexuals or people with homosexuality tendencies who disguise under the umbrella of transvestism in a subtle attempt to circumvent the wrath of the draconian Anti-homosexuality law in Nigeria. These cross-dressers clad themselves with colourful dresses that depict feminity. They also adorn themselves with thick sweeps of eyeliner, conspicuous acrylic nail designs, exotic wigs, and other female accessories.
With the recent spate of cross-dressing in Nigeria, there is an urgent need to carefully appraise this development and ensure that the right decision which resonates with our moral standard is enforced.

Research shows that cross-dressing is not an entirely new phenomenon in Nigeria. One of its cultural manifestations is in the aesthetically amazing Adamma masquerade [4]. The ceremonial masquerade called Adamma, translated as a beautiful first daughter, is a maiden spirit mask peculiar to some villages in the South-Eastern part of Nigeria. Since masquerades are prohibited for women, a man is usually behind all the dramatic sequence and elaborate effeminate mannerisms associated with the masquerade.
In the 1970s, an entertainer popularly known as Area Scatter was one of the few cross-dressers who gained acceptance into the mainstream media. According to available information, he went into the wilderness during the Nigeria-Biafra war. He returned after 7 months and 7 days and claimed that the gods have fortified him with spiritual powers and feminity [5]. The effeminate man gained prominence as a cross-dresser by playing melodic music with his ornamental thumb piano. However, there are suggestions that Area Scatter’s story and behaviour was largely accepted by the people because it had a sprinkle of spirituality — a core element of the Igbo culture.
There is also the Yan Daudu in the northern part of the country. Yan Daudu is an expression for men who act like women and deliberately avoid traditional male roles. This fringe category of men dress in an epicene manner and enjoy the traditional female roles of preparing food for festivals [6]. They also procure clients for female sex workers and sometimes act as prostitutes themselves.

As stated earlier, no law criminalizes cross-dressing in the country. However, some previous court rulings suggest that such behaviour may not be accepted. In 2008, Uche Ndubuisi was sentenced to 18 months imprisonment without an option of a fine for cross-dressing. He was caught by the police around Ikeja, Lagos State, dresses like a woman [7]. Nigerian cross-dressers are often arrested on allegations of homosexuality. The 2014 Same-Sex Marriage Prohibition Act (SSMPA) which banned same-sex marriages also criminalized any advocacy of LGBTQ rights.

Many factors have contributed to the increasing trend of cross-dressing in Nigeria. The influence of poverty and unfavourable economic condition cannot be overemphasized. The flamboyant and glamorous lifestyles associated with cross-dressers have created the impression that indulgence in cross-dressing is one of the easiest ways to financial emancipation. Bobrisky once showed off a N27 million credit alert in response to questions on who was bankrolling him [8]. Whether the credit alert was real or not, some impressionable youths, especially those who are under the scourge of poverty, might be tempted to follow in his footsteps. After all, there seems to be a guaranteed fortune for anyone who jumps into the cross-dressing bandwagon. To put the awful rate of poverty in the country into a clearer perspective, a report released by the National Bureau of Statistics (NBS) shows that 40 per cent of the total population, or almost 83 million people, live below the country’s poverty line of N137,430 per year [9]. Consequently, many Nigerian youths have perpetrated disgusting acts such as internet fraud, drug trafficking, ritual killing, fetishism, kidnapping, and such other vices just for financial benefits despite the strict punishments attached to these crimes. It is axiomatic that some of the youths who have indulged or have considered indulging in these crimes would readily grab the opportunity of cross-dressing for monetary gains.

Another factor is the high rate of unemployment in the country. While Nigerian youths roam around the streets in search of gainful employment, cross-dressers are smiling at the bank. It is mind-blowing to know that access to Bobrisky’s Snapchat premium account is only granted after a fee of N10,000 is paid [10]. Another cross-dresser, James Brown, blamed the high rate of unemployment in Nigeria for his decision to cross-dress. He revealed that before his indulgence in cross-dressing, he earned N10,000 per month [11]. He further added that he now makes ten times that amount per week. This justifies why he has always encouraged young Nigerian men who are submerged in economic hardship to join the cross-dressing business for financial buoyancy. Further buttressing this point, a fan of Bobrisky who inked the cross-dresser’s tattoo on his hand has joined the ranks of cross-dressers citing unemployment as his reason.

This trend of transvestism is a reflection of the moral decadence in the country. We are gradually losing our collective morals and values due to the accompanying elements of westernization (or wokeness). This moral decadence has been deepened by the dereliction of parental roles and responsibilities. James Brown revealed that he doesn’t have a cordial relationship with his mom. He further added that before his birth, his mother wanted to abort him because the pregnancy was out of wedlock. Thus, he was starved of the essential parental love and care while growing up. Other parents, in a bid to caress the admiration of woke people, have voiced their support for cross-dressing and LGBTQ activities — something they were left to rue in the future. Charly Boy, who has always advocated for cross-dressing and homosexuality in Nigeria, disclosed that he was unsettled when his daughter, Dewy, told him that she is a lesbian and it took him months to come to terms with that reality [12]. He added that he blamed his lifestyle and his bad parenting for his daughter’s preferred sexual orientation.

Strange as it sounds, cross-dressing is not without its health implications. It can result in transvestite disorder which causes significant distress in people or substantially interferes with their daily functioning and behaviour [13]. Some men involved in cross-dressing may have feelings of gender dysphoria when subjected to stress.
Aside from the health effects, some of our youths are ardent admirers of these cross-dressers. These susceptible youths sometimes emulate the characters of their favourite cross-dressers. This is not good for the future because these cross-dressers are always challenging our societal norms and views. One of the most recent converts in cross-dressing, Lord Caster, praised Bobrisky as his role model for his decision to cross-dress. If this is allowed to continue, more and more cross-dressers will emerge and homosexuality will be further normalized.

In conclusion, cross-dressing does not have a social, cultural, and religious acceptance in Nigeria. The lifestyle is completely at variance with the moral standard of the Nigerian society. There is a need to utilize the important tool of the media to properly sensitize and educate our youths on our values as a country. The government must help to ensure that the aforementioned factors which have escalated this trend are checkmated. Culture is dynamic. But, we cannot allow certain lifestyles to encroach on our moral standard and disrupt the sanity of the country. Yes, we should be worried about this trend of cross-dressing. 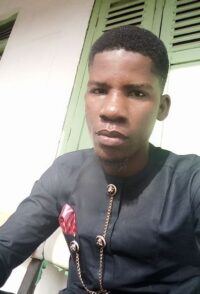