Home FEATURES On This Day On This Day: The Promulgation of the Unification Decree No. 34
Post Views: 36

On this day: in history (1966), the Head of State, Major General Johnson Thomas Umunnakwe Aguiyi-Ironsi promulgated Decree number 34. It was called Unification Decree while some critics at that time labelled it the De-unification Decree. 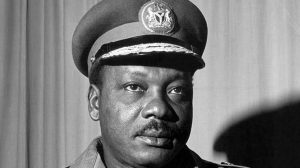 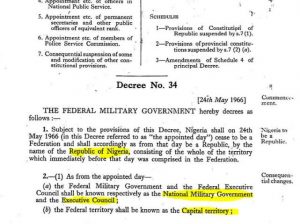 There was this fear among Northern elites, especially among those of them in the civil service at that time, that a unitary system of government will lead to the domination of the Federal Public Service by the Easterners. The fear was grounded on the assumption among the Northern elites that under Decree No. 34, they will lose out and that the Easterners will exploit, dominate and control the entire public service. Ironically, the reverse is the case in today’s Nigeria.
On 29 July 1966, General Aguiyi-Ironsi and the Military Governor of Western Region, Lt. Col. Francis Adekunle Fajuyi were murdered in Ibadan after a meeting with the traditional rulers from all parts of the country to explain Degree No. 34.