Home FEATURES On This Day On This Day: The Assassination of Alhaja Kudirat Abiola
Post Views: 30

On this day: in history (1996), Alhaja Kudirat Abiola was assassinated whilst her husband was being detained by the Nigerian Government. 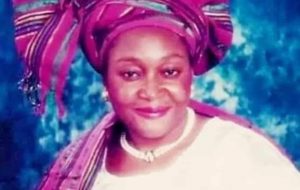 Her husband was believed to have been the winning candidate in the Nigerian elections that had taken place in 1993, and he was arrested shortly after they were annulled by the government of the dictator Ibrahim Babangida.

The killing was the subject of an investigation and trial many years later. According to accounts, the murder was ordered and then carried out by six men. Alhaja Kudirat Abiola died in her car from machine gun fire. Her driver also died. Her personal assistant, who was later accused of being involved with her assassins, was in the car but was not hurt. 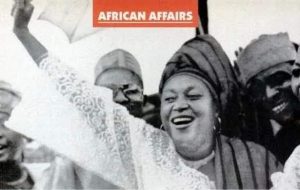 Her husband continued to be detained without charge after her death. He died in suspicious circumstances just before it was said that he was to be released on 7 July 1998.

In October 1998 Major Hamza Al-Mustapha appeared in court with the previous President Abacha’s son Mohammed, charged with the murder of Kudirat Abiola. At the trial the self-confessed killer, Sergeant Barnabas Jabila, said he was obeying orders from his superior, al-Mustapha.

On 30 January 2012, the Lagos High Court subsequently found al-Mustapha guilty of the murder and he was sentenced to death by hanging. On 12 July 2013, The Court of Appeal in Lagos overturned the high court judgement and acquitted al-Mustapha of all murder charges of Kudirat Abiola. 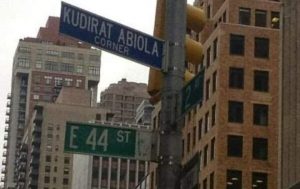 In 1998 a street corner in New York was renamed Kudirat Abiola Corner, despite protests by the Nigerian Government.