On this day: in history (1992), the Mafia boss John Gotti was sentenced to life in prison after being found guilty on 14 accounts of conspiracy to commit murder and racketeering. 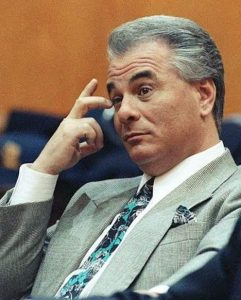 John Joseph Gotti Jr. was an American gangster and boss of the Gambino crime family in New York City. He ordered and helped to orchestrate the murder of Gambino boss Paul Castellano in December 1985 and took over the family shortly thereafter, becoming boss of what was described as America’s most powerful crime syndicate.

At his peak, Gotti was one of the most powerful and dangerous crime bosses in the United States. During his era, he became widely known for his outspoken personality and flamboyant style, which gained him favor with some of the general public. While his peers generally avoided attracting attention, especially from the media, Gotti became known as “The Dapper Don”, for his expensive clothes and personality in front of news cameras. He was later given the nickname “The Teflon Don” after three high-profile trials in the 1980s resulted in his acquittal, though it was later revealed that the trials had been tainted by jury tampering, juror misconduct and witness intimidation. Law enforcement authorities continued gathering evidence against Gotti, who reportedly earned between $5 million—20 million per year as Gambino boss.

Gotti’s underboss, Salvatore Gravano, aided the FBI in convicting Gotti; in 1991, Gravano agreed to turn state’s evidence and testify against Gotti after hearing the boss make disparaging remarks about him on a wiretap that implicated them both in several murders. Gotti was convicted of five murders, conspiracy to commit murder, racketeering, obstruction of justice, tax evasion, illegal gambling, extortion, and loansharking. He received life in prison without parole and was transferred to United States Penitentiary, Marion. Gotti died of throat cancer on June 10, 2002, at the United States Medical Center for Federal Prisoners in Springfield, Missouri.